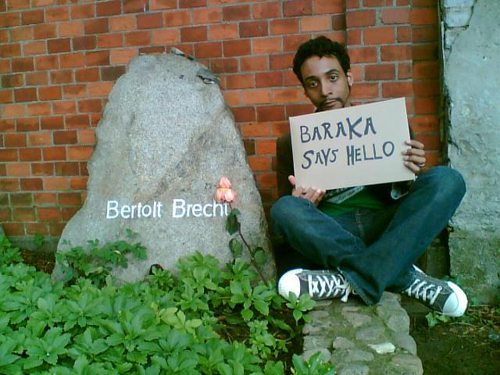 [A Fragment for Amiri Baraka]

Her refusal to crumble in between the pitied streets of a broken cabaret city and a metropolis frozen in spirit, caught between two different chords–minors and majors clashing and bending like fists in a boxing ring twirling with the sprays of sweat drooling on the grooves and in-between the rich peoples’ collars, made him sad.

He revolted when he imagined the pain of her footsteps,–but like everyone else with a battered soul, shot nerves, and no hope–all he could do was stare and stand motionlessly. At least he gave her full attention. She removed all her clothing and ejected a rolled up ball of tissue in between her legs to help stop Aunt Rosa’s mighty flow. Sadder than an unemployed man’s footprints in the snow on New Year’s Eve.
Sadder than a subway ride on a Sunday afternoon.
Sadder than people who believe that hunger isn’t murder.
Sadder than a last minute pack or an eviction notice in the strange cool air of the summer solstice.
Sadder than a cemetery with gum on its fence.
And sadder than the boys who know who their fathers are–but have no desire to be like them.

Our Maestro did eventually make it to Brecht’s grave.
An unimpressive forgotten plot of stone simply marked: Brecht.
In his pocket he had a message for the long-gone playwright.  He unfolded and stuck it beside the gravestone.  It read: “BARAKA SAYS HELLO.”   He would then inform the poet himself of his act and wondered if, when Baraka died, a German would make his way to Newark and leave a message on behalf of the already-dead Brecht.   He wondered if anyone could understand the relevancy of this, if there was any relevancy…and then his erudition cramped and he let it go for a while calmly reciting a prayer for the disowned, fragmented, unknown terrified losers who inherited the painful gift of consciousness.

I first discovered Amiri Baraka in 1995, around the time that August Wilson had challenged Black theater artists to take more responsibility (“The Ground on Which I Stand”). I honed my directing skills by re-interpreting all of his old early LeRoi Jones plays — which to me were powerful dramatic poems in motion. His poems and drama inspired me and was responsible for freeing not only my consciousness, but my artistic arsenal. It was Baraka who affirmed and understood nearly everything I had ever experienced — before it even happened. He gave me the courage to step out of the parade and forge my own path and it was he who made me understand that art and political justice and social consciousness are intertwined. That meaning cannot be separated from style. And that no art can be revolutionary…if it merely seeks to imitate what the establishment lauds. I was young and angry and passionate when I made “As an Act of Protest,” deep in the aftermath of the Amadou Diallo murder in 1999. It was a revolutionary poet’s cinema – one in which the actors were not mere interpreters, but liberators. And this scene is for him.

In this poignant scene from Dennis Leroy Kangalee’s 2001 cult film, “As an Act of Protest,” two young African-American friends and artists, discuss their frustration, rage, and confusion as it pertains to doing theater, protest art, progress, and the great American plague: racism. On the eve of their final dress rehearsal for James Baldwin’s play “Blues For Mister Charlie,” Abner, the director tries to quench the turmoil his lead actor Cairo (Che Ayende) is experiencing as both artist and human being…With so much apathy and violence, why continue to create art?

Made with an uncompromising passion, this powerfully strange film charts a young black actor’s “stations-of-the-cross” journey to escape the psychological torture of racism by searching for ways to destroy it. The film takes its cue from punk in that it is dressed down, blunt, doom-laden, and emotionally raw.

An artistic response to the rampant police brutality under the Giuliani administration in the 1990’s, which culminated in the murder of Amadou Diallo in a hail of 41 bullets by four white NYPD officers, AS AN ACT OF PROTEST premiered at the Pan African Film Festival in Los Angeles before finding an audience abroad.

“While watching As an Act of Protest, as was true in a Cassavetes film, I felt as though the principal actors weren’t so much acting as they were pouring out before the camera, depictions of the way people really behave…it is in the scenes where Abner and Cairo discuss with each other, their rage as African American men, that the film is so compelling.” — Hugh Pearson, author of “Shadow of a Panther: Huey Newton and the Price of Black Power in America”

NOTE: This footage was re-assembled from various bootlegs and we’ve tried hard to retain the original sound, however difficult.