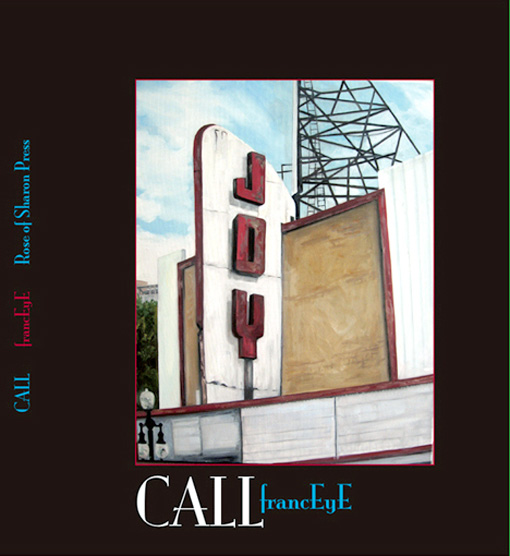 Some of these poems have appeared in various publications including Beyond Baroque Magazine and Pearl. Greatful acknowledgement is made to the editors.

The poems Start In Art At One and Pitiful Song To A Pitiless Critic that appear at the front and back of this collection were retrieved from the contents of the celebrated old metal file box (spray painted gold) found in a dumpster shortly after Charles Bukowski’s passing that contained the “lost” Bukowski poems. However, this was only a part of the find. The contents are actually the collected works and meeting minutes of the Unitarian poetry group that francEyE and others were a part of during the 1950s-1960s.

Her initials, “fdb” indicate “Frances Dean Bukowski,” which is how she had signed some of her work during this period. These poems are used with the kind permission of Linda Lee Bukowski.

Edited by S.A. Griffin, Photo of francEyE at the Church in Ocean Park by Marie Blakey. Cover painting The Joy Theatre, New Orleans 2006 by Diana Bonebrake. Layout and design by Kelly Dessaint, Irina Belenky and S.A. Griffin. Rose of Sharon Press First Edition, September 2008, Rose of Sharon Press, P.O.Box 29171, Los Angeles, CA. 90029-0171, Distributed for Rose of Sharon by Phony Lid Publications. ISBN: 1-930935-32-3. This book is 8.5×11, 126 pages, perfect bound with over 130 poems inside. Introduction by John Harris and additional comments by Neeli Cherkovski. The book includes work by francEyE from the early 60s until the present.

francEyE is an original voice, a rebel poet in the vein of Kenneth Patchen and Muriel Ruykeser, sharing with them an insistence on being so marvelously taken with the power of ordinary language. Her work is fueled by playfulness, keen observation and deep intelligence. She is a masterful poet, shaded by the palm trees of her city, Los Angeles — a writer who should be heard by all good readers. francEyE, collected here, takes her place. Neeli Cherkovski

the bearded witch of Ocean Park, was born Frances Elizabeth Dean in San Rafael, California, on St. Joseph’s Day, 1922. Without consulting her, her parents whisked her off to the East Coast where she grew up, beginning to publish in the 1930s in school newspapers and Scholastic. She studied verse writing with Grace Hazard Conkling at Smith College in 1941, had a villanelle published by William Rose Benét in his column The Conning Tower in the Saturday Review of Literature in 1942, but then wrote little and published nothing until about 1963, when she finally returned to California. She has been writing, attending poetry workshops, and publishing here and there ever since.

Her work has been included in The Outlaw Bible of American Poetry, in L.A. Woman (published in Germany), in two British periodicals, in The Chiron Review, among many others and will be included in the forthcoming anthology of California poets to be published by Tebot Bach next month. Her book of poems, Snaggletooth in Ocean Park, was published in 1996 by The Sacred Beverage Press. Pearl #25 contains a 21-poem sequence called “Why Steal Fire?“ Blue Satellite Final Issue contains a 27-poem sequence called The Asteroid Poems

Known as the bearded witch of Ocean Park and the female Charles Bukowski (with whom she had a child), francEyE has been a fixture in the Southern California poetry scene for more than four decades. She writes prolifically in a style compared to Ron Koertge and William Carlos Williams, and frequents poetry readings in both Los Angeles County and the San Francisco Bay Area.

francEyE believes writing is a form of self-discovery and has been quoted as saying, “I don’t know who I am and I want to find out;” “You are the only person who ever was, or will be, you;” and “Everybody is a poet. They just don’t exercise that part of themselves.”

Winner of the Allen J. Freedman Poetry Prize, francEyE is author of Snaggletooth in Ocean Park, published in 1996 by Sacred Beverage Press; and the chapbook, Amber Spider, published in 2004 by Pearl. Unpublished work includes the Grandma Stories collection; the chapbook, Things; and the book, Call, published by Rose of Sharon Press. The poet has also published in Chiron Review, Comet, and Blue Satellite, and can be seen in the film Bukowski: Born Into This (2004), GV6 The Odyssey: Poets Passion & Poetry (2006), and other documentaries about the LA poetry scene.

francEyE grew up on the east coast where she began to publish her writings in the 1930s. Returning to California in 1963, she eventually developed into a matriarch of the Los Angeles poetry community. Her eclectic past encompasses service in the Women’s Army Corps during World War II and a stint in the 1970s as a waitress at Al’s Kitchen on the Santa Monica Pier.

francEyE is also a winner of the Church in Ocean Park’s Communitas Awards (2004). A pacifist who believes that poetry has the ability to change people, francEyE says her job

“is to be myself and encourage people to be themselves. Things aren’t going to change until people change, one person at a time.” 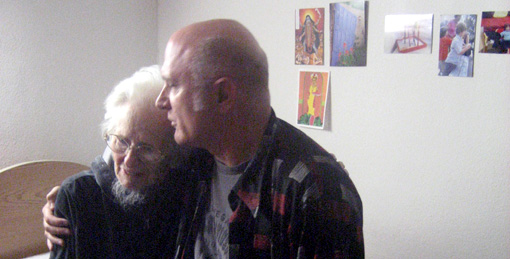 calls herself francEyE, writes poetry and lives alone in a small apartment in Venice. Well, not totally alone, because there are Charles Bukowski posters on the wall and enough memories of him to fill anyone’s room. Even in death, he’s somehow as strong and present today as he was back then, when he was drinking, brawling and whoring his way up and down L.A.’s seedier streets.

francEyE, whose last name is Smith, lived with Buk, as he called himself, for almost three years, and bore his child, Marina. They separated, she says, because “two crazy people just can’t live together.” At 80, she doesn’t seem crazy, sitting in a rocking chair and peering out through oversized glasses, as pert and snappy as an early spring. Well, yes, there are those fairly long chin hairs she’s let grow, but that’s just her stamp of individuality, a declaration of self. She’s a poet, after all, and you know how they are.

I came across her name in a Bukowski biography by Howard Sounes. There aren’t too many francEyEs in the world, and when you see the name, it just kind of jumps out at you. I realized that someone named francEyE had been sending me poetry over the years. I discovered it was her, Buk’s woman, which is why I went to see her.

I’m a Bukowski fan, and was even before he died of leukemia in 1994. When I read of his death, I felt like throwing myself from a high window or something. Not in grief, because he drank enough to have died long before he did, but because I had always wanted to meet the man and just never got around to it. My life is composed of things I’ve intended to do but haven’t, and people I’ve wanted to meet but haven’t. Damn me.

Bukowski was a poet of the street and of the people who still inhabit that world. He wrote poems so powerful, one admirer said, that they constituted “the spoken voice nailed to paper.” Some poets whisper, but he roared and growled his verse, daring anyone who read it not to remember its potency. It was filled with black-and-white imagery and visions of sadness that seemed to regard the world not with scorn but with the frustration of a man whose questions were never answered.

francEyE remembers him as a guy who could be, as she puts it, “a decent citizen who dressed up to go to work at the post office every day” when he was sober, but became a confrontational drunk on weekends when he’d hit the booze. Then, she says, he got stupid and verbally abusive, insulting even those he liked or admired and sometimes getting into bar fights. “He used to say that he needed me to explain things to him, about how to get along in life.” 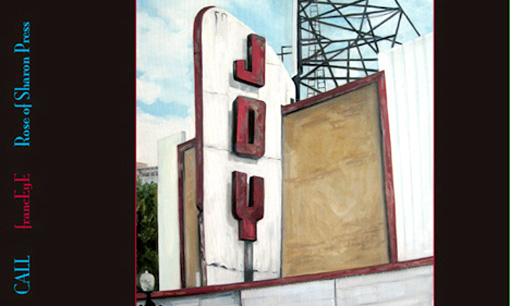 She met Bukowski through an exchange of letters and began living with him in 1963 in a place on Mariposa Street that someone said smelled like cabbage and rats. “He wrote every day after dinner and before going to work at night at the post office,” she says, remembering him. “He always wrote one poem. He had a huge head. I’d look at him and wonder what it would be like to have so much in my head.”

francEyE was drawn to Bukowski by his poetry. Her real name was Frances, but she changed it when a friend said that Frances sounded plural. She was writing her own verse, but didn’t know whether she was really a poet. “I didn’t have a role model for my work,” she says. “Then I read Buk and he just put it out there.” They stayed together until their differences split them apart. “He wanted a happy woman singing in the kitchen,” she says. “That wasn’t me.”

Bukowski used to say that his poetry came easy. “The wine does most of my writing,” he told an interviewer. “I just open a bottle and turn on the radio, and it comes pouring out.” But it’s the place it comes pouring from, words and imagery on fire, that makes the difference. It’s that place in the soul where life and talent merge that produces greatness.

Well, there. I never got to meet Bukowski or drink with him or share stories and lies with him. But I got to meet someone who knew him and loved him and could never really figure him out, even though she slept with him and had his baby. I got around to meeting francEyE, anyhow. That’s something. by Al Martinez
December 06, 2002.  source

More books written and edited by S.A. Griffin can be found here…