Mortality, Immortality and the Resurrection of Keith Wilson

by Lawrence Welsh | This essay first appeared in the Malpais Review.

When a city’s most important writer dies, does that city die too? That’s the question I often ask with regard to Las Cruces, New Mexico, and Keith Wilson.

Wilson, a native New Mexican who was born in Clovis in 1927, died in 2009. For many in the know, he remains one of the state’s greatest poets, and after spending more than 40 years in Las Cruces and Southern New Mexico, he became known as “The Shaman of the Desert.”

That, of course, is an almost impossible tag to live up to, but Wilson embodied every aspect of the title while never acknowledging it. He simply was, for many, the definitive New Mexican, one who channeled the landscape directly through his blood and into his love for the people and the language of the Southwest.

Perhaps his poems were molded by Spanish, his first language. Maybe they came about because he carried, and proudly so, Celtic and Irish blood. Whatever the reasons, we’re lucky that in 2009 Clack City Press in Livingston, Montana, published the massive, 1,100 page Shaman of the Desert: The Collected Poems of Keith Wilson, 1965-2001. 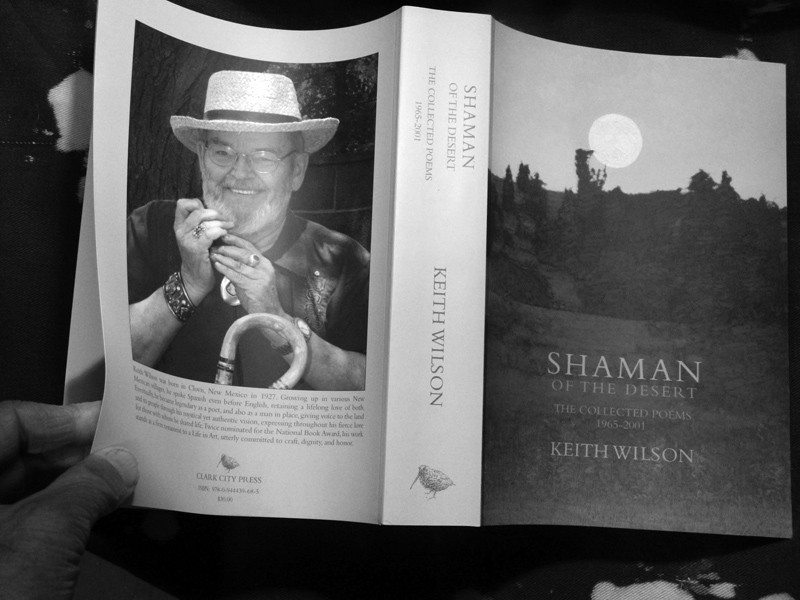 Wilson never saw the book’s completion, but he knew of its progress and talked proudly of its forthcoming publication. Like the equally massive Collected Poems of Ted Hughes, Wilson’s final omnibus reads like an homage to both the seen and unseen worlds, a calling out to spirits that have inhabited this earth for centuries and can no longer be visited by the living. Like Hughes, the words and images seemed to arrive orally, long before words ended up on paper or parchment. Of course Wilson didn’t have Hughes’ luck, and his Shaman Collected received scant notice upon its arrival. It didn’t help that Wilson was already dead, and it didn’t improve chances for success when Clark City Press went broke soon after Wilson’s publication. In the end, the book never went out for review or award consideration. The publisher, a well-known artist who put out beautiful books, simply closed and moved back to Northern California to devote the rest of his life to painting.

The massive tome then slipped into obscurity with little recognition at all. And Wilson, too, has mostly been forgotten. In fact, nowadays many Southwest writers have no idea of his work or worth. One too would suspect that Google could deliver a vast amount of “hits” about his life and backlog. Sadly, that isn’t the case. In the end, Wilson has become like the desert itself: capable of turning into only dust, sand and wind. In some way, I know he wouldn’t mind this. Some 40 mostly out of print volumes are still out there, and the collected is available for anyone who wants to dig it up. Only time will tell what sort, if any, resurrection will occur. Without doubt, though, Wilson deserves a generous one.

Stepping back a bit, I remember first encountering Wilson’s work in 1994, when I permanently moved to El Paso from Los Angeles. On many occasions, he wound up in El Paso at a wide range of readings: lofts, parties and loose get togethers. He had already secured his place as one of the masters of the area, and I had difficulty relating to his work, mainly because I was still immersed in an L.A. existence of pure urbanism: steel, concrete, smog, gang wars, constant racism, those sort of things.

About a year later, I immersed myself in a new life by taking long solo hikes into the Chihuahuan Desert, both in West Texas and Southern New Mexico. I also started praying and meditating in the desert. Somehow, I remembered Wilson’s work and returned to his books. It’s not a misnomer to say that they came alive anew, and the words gave credence to the physical and spiritual landscapes. Certainly, the Catholicism I grew up with was transfigured and rearranged in Wilson’s words, but one also sensed a channeling of both Celtic and Native American worlds. Around this time I called, and he invited me into his home. On those trips, I always took a notebook, so I could listen and write down whatever recommendations he would make.

In his first chapbook, Sketches for a New Mexican Hill Town, published in 1965, Wilson set the stage for the rest of his poetic career, by remembering the sacred world of “Los Penitentes,” that devout lay order of New Mexico Catholic men.

of the needs of men,
backs raw from cactus whips
yet speaking of light, they who were
Brothers of Light, brown men
chanting

Humble Christs,
singing
to the agonies o
of wounds…

Perhaps, then, too, the poem becomes a portrait not only of the rigors of the spiritual life, but the life that Wilson would live — that of the poet:

As with any great poet, however, darkness eventually turns to light, and the desert light of New Mexico turns to a sort of sacred hallucination in Wilson’s hands, and that’s the essence of his poetic gift: sacred hallucination and vision when friends, family, landscape, ceremony, and living are concerned. In that way, we see why Wilson studied and admired masters like Charles Olson, Robert Creeley and Denise Levertov. Olson, who continually grasped for both the known and unknown in the spirit world, and Levertov, with her conversion to Catholicism, both offered the world a vision of the sublime light, mixed with the cautionary blues of the poet’s often dark journey.

In another early poem, “Mantrim,” one is never sure if we’re here or there, in this world or the world of the spirit. We’re certainly, though, in a space also occupied by the deep images of Creeley and George Oppen, the master American poet who won the Pulitzer Prize. Here’s the poem in its entirety:

Those rocks, vistas and mesas never disappear in Wilson’s work and serve as totems, in a sense, for spirits to walk on or through. In his poem “The Celt in Me,” Wilson digs deep into his own blood and taps into the countless generations who sacrificed and battled others and themselves for a simple step up in society, only to return to dust once again and the very real specter of anonymity and a dead facelessness:

In a museum here I saw a Celtic swordblade,
Rusted, bent in combat. No handle.
These men who built what now are shadowed ruins…

And, once again, they don’t leave Wilson alone as they haunt his language and almost call him home. Later in the same poem, we learn that the spirit world is, indeed, calling to him:

From ancient barrows, dim men with old robes
Walk gravely through the Danube mists
Their arms outstretched for me.

If the muses for Wilson are rooted in the land and air, they also permeate his work at sea, which is the setting for Graves Registry, a book of his days and years spent with the U.S. Navy where he served during the Korean War. Most anyone who has spent time in the desert Southwest knows its connection or can feel the presence of the sea. On many occasions on hikes around West Texas and Southern New Mexico, I’ve picked up shells in the desert, and it always serves as a reminder that the great vistas were first seas and oceans. And much like the desert, Wilson captures the spirit essence of the sea as its forbearers reach out for him. This occurs masterfully in the poem “SeaDream”:

In “StarChart,” also from Graves Registry, Wilson is secure in knowing that the waves and oceans will deliver the words for a continuing shamanic journey:

Still, time and time again, Wilson returns to the desert Southwest, that place where he both started and ended as a poet. In a sense, we know that his work will go on just as his beloved New Mexico will go on.

In “The Voices of my Deserts,” Wilson channels the land and its inhabitants and realizes that all of it, every bit of it, will one day be blown away: the words, the poetry, the homes, the tales, the people, the money. The reader learns, as he or she does through all 1,100 pages, that that’s perfectly OK with him. In fact, he tells us: Let spirit have it all, for every bit of mortality needs to be sacrificed for a chance at some immortality that only the desert can understand:

The ghosts of wolves ring our hills.
Those birdcries, Comanche songs drifting
Up from wartrails; the click of steel
In the night, prospectors or old soldiers
sharpening the edge of darkness to a keen
wind that blows all the stories away.

In the end, Wilson is contented with the blowing, rattling, sharpening, crying and howling, for isn’t that what great poetry is all about: that channeling of the muses and spirits that deliver the words and worlds? That place of depth and total surrender to the poet’s life?

Finally, I have returned to Las Cruces a few times since Wilson’s death, but it’s always a challenging journey because I feel his spirit everywhere, and I remember his friendship and mentorship and, in a sense, the city passed away for me when Wilson died. Somehow, though, I know he wouldn’t want it that way. Perhaps he’s whispering right now for me to get back there, to rekindle the friendships, to make a go of it.

Perhaps that journey has already started. But even if it hasn’t, there’s always the work to return to, those poems and images that keep Southern New Mexico and Las Cruces alive long after the master has gone. In his 1971 poem, “The Old Man Builds a Fire,” Wilson stakes his claim for remembrance, and it’s a task that we must support, that we should perpetuate by keeping his work alive, first and foremost by carefully remembering his timeless words that remain rooted in his beloved New Mexico:

The geography his hands
leave in the blue air of the shack
are maps, charts of land and trails
the shadowed moccasins of his dreams
have made

has published nine books of poetry, including Begging for Vultures: New and Selected Poems, 1994-2009 (University of New Mexico Press). Now in a second printing, this collection won the New Mexico-Arizona Book Award. It was also named a Notable Book by Southwest Books of the Year and a finalist for both the PEN Southwest Book Award and the Writers’ League of Texas Book Award. A first generation Irish American and award-winning journalist, Welsh’s work has appeared in more than 200 publications. Born and raised in South Central Los Angeles, he lives in El Paso, Texas. 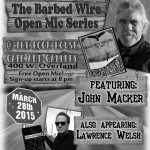 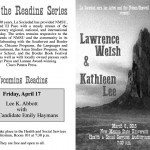 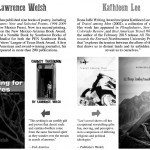 One Reply to “Mortality, Immortality and the Resurrection of Keith Wilson by Lawrence Welsh”