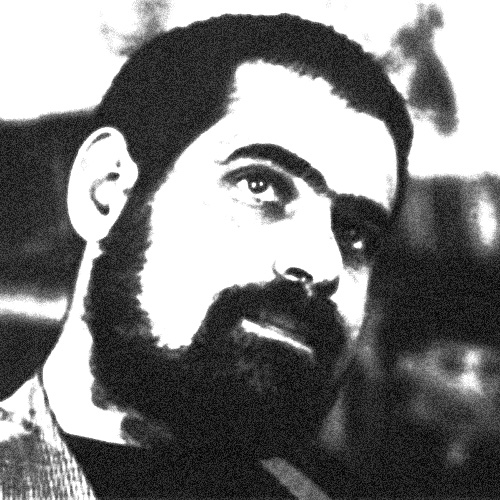 “The Poet is the world’s remembrancer.”
-Lawrence Lipton

“He told of taking acid in situations that would terrify me, for instance, a jail cell in Terminal Island.”
-Robert Creeley, on Stuart, from his foreword to Voices Of The Lady: Collected Poems, Stuart Z. Perkoff

Stuart Z. Perkoff was the Southern California Beat Generation’s tortured over soul who gave that movement a lot of its spirit, its sense of place and its relevance. By the end of his life, Stuart would manifest everything that was righteous, precociously outlaw and sui generis about Venice before the bad press and the cops cracked down on the bikers and drug dealers. He was friend and mentor to a generation of wild, original bohemian wordslingers who were (mostly) accepted into the larger extended family of the Beat Generation, in the 1950’s.

Early on, Stuart was befriended by the L.A. intellectual cum hipster/novelist Lawrence Lipton, who hosted “salons” that attracted the hip, the disenfranchised, the poets and painters, the poseurs, the dilettantes. Poets like David Meltzer, Tony Scibella, John Thomas, Philomene Long, Bruce Boyd, Robert Alexander, Alexander Trocchi, Stuart, and others sought out kindred spirits within Lipton’s ever-evolving sphere. (Jack Kerouac had even showed up at one point, with Steve Allen, all surly and swollen and drunk to his core). The Holy Barbarians, Lipton’s best-selling account of this era and its characters was published in 1959 and is now highly collectible in hardcover.

Stuart appeared as a successful contestant on Groucho Marx’s You Bet Your Life. He also realized the poet’s vulnerability in the media eye once national word got out about Venice’s role as a harbor for the beatniks’ dark side. The poets and artists of Venice West were suddenly catapulted into the spotlight for most of the wrong reasons, and, subsequently, became objects of ridicule and satire in the press. He disdained such displays and in Jack Hirschman’s generous words, “preferred anonymous best of all.”

Despite all this he and Lipton were the subjects of John Arthur Maynard’s respectful biography Venice West: The Beat Generation in Southern California. (Rutgers Univ. Press, 1991.) Much of Stuart’s close friend Tony Scibella’s contribution to that book was through an interview I did with him in Denver, in 1986 and originally published in the magazine, Moravagine.3.

Stuart appeared along with the best poets America had to offer in Donald Allen’s historic anthology, The New American Poetry, 1945-1960. In its scope, originality and audacity it has yet to be rivaled. Although many of the poets included were Stuart’s good friends, he ended up changing the lives of his closest poet-companions, the painter/collagist Tony Scibella, New York gangster-with-portfolio Frank T. Rios and poet/publisher James Ryan Morris.

His rogue books appeared in mostly soft cover, small press editions lovingly produced by publisher friends. He spent some time in prison for drug offenses in the late 60’s-early 70’s which he never really recovered from and which truncated his publishing “career”. Kowboy Pomes, Eat The Earth, Alphabet, Only Just Above The Ground, some of his best writing- after he had morphed into a great, grey-bearded long-haired bear of a poet- came out in the short span between prison release and his untimely death from cancer at 43 in 1974. Jonathan Williams had published Perkoff’s seminal and haunting, The Suicide Room, in 1956.

In the mid 90’s, Stuart’s older brother Gerald approached Tony Scibella and others about collecting Stuart’s work into one volume. Later, Gerald contacted Allen Ginsberg about publication of this manuscript and Allen led him to Maine’s National Poetry Foundation, partially funded by Stephen King. In 1998, Voices Of The Lady: Collected Poems appeared with an honorable and insightful introduction by Robert Creeley. It covers all of Stuart’s published and unpublished works. A substantial tome by any standards and an outlaw masterpiece by a true rebel –Jewish mystic, ex-con, wordslinging junkie genius whose influence is still being felt.

For 20 years now, I’ve considered Stuart a kind of guardian angel riding point for me into America’s voodoo bone darkness- I still on occasion sit my wife down by candlelight with two shots of Herradura, and read some of Stuart’s words out loud. They can still send chills up my spine just like they did when the late Denver poet Larry Lake first handed me a copy of Visions For TheTribe. I couldn’t seek the muse’s touch without encountering Stuart Perkoff’s shadow on the trail. The man’s language, its musicality, its exhortative cadence & jazz rhythms, the bare-boned tragedy of his life sometimes bear down on me like the summer night sweat dripping from a sky full of stars.

Some of his poems/lines continue to unspool in my mind, fearless, luminescent mini-movies, here and there, across open ground, throughout the universe: from Kowboy Pomes:

Indian hunters, after prayer
& dance hid within
sacred skins. to see thru his eyes, crawl
to the core of his world
aaaaaaaaaaaaaaaaaaaafeed, sleep
nurse the young? what of those
transformed
who never
returned, moving over the rich
land,eating
grass,begetting
grass eaters?

From Love Is The Silence:

jack, let’s talk
abt
the streets.OK? where
it’s all
happening, right?

what do we want from them? not
more blood, no graduate courses
in human capabilities. dachau
was the streets. how many more
such roads must we travel?

let’s insist on vision
i will accept nothing less than miracles
all men are unhappy
camus sd
& everyone dies. a street
all share

perhaps it is a matter
of language
aaaaaaaaaaathe sage says: man
is the language of
god. What creature or monster
forms our world
in its mouth?
where we walk
we know the dangers. if
the choice is between the streets
& literature
there is no choice

maybe we shd be talking
abt “joy”. Is that what you mean
by “streets” jack?

“Like it or not, being alive finds its own way to live of necessity.” -Robert Creeley

Friends, lovers, muse, children, countrymen, peers, Meltzer, Tristan Tzara, Gary Cooper, Charles Mingus, John Garfield, John Thomas, Thelonious Monk, Kirby Doyle, Dylan Thomas, Abbot Kinney (founder of Venice, CA.), Philomene Long, Ben Talbert, Stuart wrote poems to them all, in all shapes and sizes: hip theatrical dialogue, short prose, spontaneous short line, invocation, many without titles, just Stuart riffing to the earth and sky, praying the poem gets riffed back to him by the gulls, the waves of his beloved “moonwash sea”, echoing off the voices of brother poets, guided by the sound emanating from the Lady’s lips. Stuart’s muse was external, an out of body experience, the “Lady” of his life, cosmic goddess she-fire chanted down to earth and into his soul by the uncharted intensity of his poetics.

As Tony Scibella has said, as close as the Venice 3 were, none of them sounded like the other and Stuart didn’t sound like anybody. His readings were legendary for his basso profundo voice and intonation, very formal, rabbinical even.

i went to hear kirby doyle read
it was at ucla a maze of glass mountains
jack hirschman showed me a book of Hebrew letters
kabbalah! poems! madness!
this was years ago

not long after that I went to prison
a desert of concrete & steel sterility
the I ching told me to perservere
& I thot of the Hebrew book
& the doyle poems abt
dope! motorcycles! john garfield! love!
that, too, now, is in
the past,
in the present I am surrounded by books
aaaaaaaaaaaaaaaaaaaa(the past)

as everything is
or will be.

As far back as 1951, Charles Olson, on the occasion of Stuart’s poems being published in Cid Corman’s Origin 2, recognized his impact:

“i have just been telling creeley how very moved i was last night to find you there (origin 2) with us That those two poems of yrs belong with us; and are something neither of us, or anyone else, can visit as you can such another hell . . .”

Stuart’s “another hell” was on earth, within his family, in the derangement of his senses by heroin and other drugs, the expectations of a soul- destroying, “responsible” society spawned by victory over Japan and Germany, and a cold war that had addicted itself to world arms escalation and the grim potentiality of nuclear annihilation. Stuart recognized the shadow of fear but refused to reside within it. Death was always available, everyday, another shadow, kin. But he wrote the Hell out of it, the sweating threat of it, everyday, his health and blood on the line, one word ahead of another, in the Lady’s light.

On his deathbed, he was attended by two Ladies, his muse, ever hovering, feeding him lines until the end and one of flesh, his last love, the poet, convent renegade and self-proclaimed “queen of bohemia”, Philomene Long who captured, on tape, his final words. For the rest of us there is the last poem in Voices Of The Lady, another untitled, handwritten, taken off Stuart’s wall shortly before his death:

So black, the visions. That’s why they
linked gaunted arms & stumbled towards
the flames in a feeble dance of celeb-
rations. For the visions cannot be
denied, reality is irrevocable &
so, precisely there they found joy
& song.
aaaaaaaaGrant me that strength
he who must remain
unnamed. 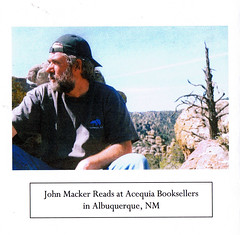 Poet, “in the middle of life”, editor/publisher/bookseller, renegade wordslinger, desert defender. Author of several books of poetry including Adventures In The Gun Trade, (2004) Burroughs At Santo Domingo (1998) and Wyoming Arcane (mad blood #5, 2006) Another book is Woman of the Disturbed Earth, Longmont, CO:Turkey Buzzard Press, 2008. “to keep the highways clean and bother no being.”–Lew Welch.

More on John Macker can be found here…