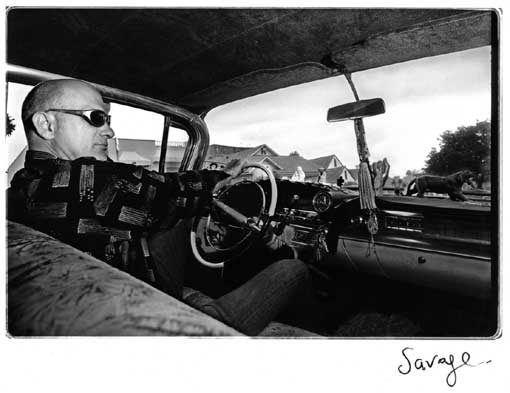 DANCING IN THE FIRE WITH S. A. GRIFFIN by Todd Moore

I remember sitting up half the night talking to S.A. Griffin in my book littered office about everything from poetry to crime to movies to getting drunk. I remember listening to S. A. read The Apes Of Wrath at the Gerald Peters Gallery in Santa Fe. I remember the crazy outlaw talk talk talk in John Macker’s converted roadhouse home out in Bernal and the walk out into the wilderness beyond his house where he had made a slab rock altar for Sam Peckinpah’s typewriter. I remember the hour long interview S. A. Griffin did with me on his blogtalk radio show. Mostly, what I remember about the times that S. A. I get together is the excitement of the conversation. Which is really more like plugging into a shared energy source. 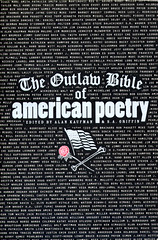 The first time I ever talked to S.A. Griffin was on the phone. It was a Sunday afternoon and he was asking me if I would be interested in sending him some poems for an anthology called THE OUTLAW BIBLE OF AMERICAN POETRY. Just like that, as naturally as though he were asking if we might go out and have a beer together. Little did I realize that this was a watershed moment in my life. Because THE OUTLAW BIBLE became one of the biggest best selling poetry anthologies ever and I mean ever. And, I know there are people out there who are pissed off that Bukowski wasn’t included. That exclusion along with several other really major small press poets was NOT because of a decision that S. A. Griffin had made. But, once you get past that glitch, what hits you is that this anthology gave some exposure to many writers and poets who had, for decades, been working right at the margins of american poetry. And many still are. This anthology did not invent or really define Outlaw Poetry, but it certainly was influential in discovering many of those poets are really are the Outlaws. And, it provided some real momentum for rediscovering what was necessary Outlaw and blood required for revitalizing what survives as american poetry.

What surprises me is that I had seen S. A. Griffin many times before I really knew who he was. Griffin has spent much of his life as a film and tv actor. One of my favorite movies is PALE RIDER and in that film Griffin plays one of John Russell’s badass deputies. I’ve always been disappointed that so far Griffin has not been given a larger role in a movie. He’d make a great John Glanton, the leader of the bounty hunters in Cormac McCarthy’s novel BLOOD MERIDIAN, if that movie is ever going to be made.

Smoke words, drink words, drink asphalt. That’s from Carma Bums Rules Of The Road. This is the absolute essential energy that is S. A. Griffin. This is S. A. Griffin, this is Los Angeles, this is the psychic energy of poetry, this comes close to an american duende if there is such a thing. There really can’t be simply because this isn’t Spain and nobody in america is Lorca but if america could be Spain for say an insane drunken fucked up pistol pointed at the forehead second, then smoke words, drink words, drink asphalt might just come close to an american crazoid duende. 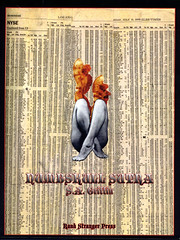 The thing that has not surprised me is that huge mountain man of a book called NUMBSKULL SUTRA. It’s Griffin’s own personal automatic weapon assault on american poetry. Bang, bang, you’re dead, it has that kind of an effect. Published by Rank Stranger Press in 2007, it announces itself largely. It elbows its way to the front of the pack. NUMBSKULL SUTRA is essentially the big movie that S. A. Griffin has always wanted to star in. This is his role of a life time. This is the part to die for. No doubt that S. A. Griffin will write other books, but this really is the big one. This is the Los Angeles urban/barbaric yawp. This town stinks all to hell of Chanel Number 5 and sunbaked Ripple. This is where the Mexican orange merchant pukes on the street of dreams, have you found your name on the street of stars yet, if not I will machine gun the letters in and pour blood in the cracks, this is where somebody asks does the poem really matter while someone else climbs into a big car in need of bad repair to set out on a long pot smoking drive and Hollywood is burning in the background like an already forgotten silent movie back lot sans the kiss. And, forgive me S. A. if I have not broken the lines where they should have been broken or have left out a few words or put in one or two that didn’t belong there or not given the proper titles because these are YOUR WORDS and there is a little outlaw dancing in every one but first understand this.

The poems from NUMBSKULL SUTRA have a way of shooting out through the psychic veins, have a way of blowing all the usual poetry niceties right out the smashed to hell window because what I see in these poems, what I get in these poems is Los Angeles as apocalypseville. It’s Post Bukowski, it’s post Micheline, it’s post d.a. levy and pure pure Outlaw with razor bladeTude. And, S. A. we both know some parts of Los Angeles will always be burning, shall we dance in the fire? 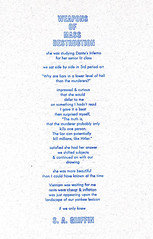 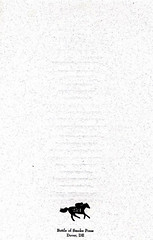 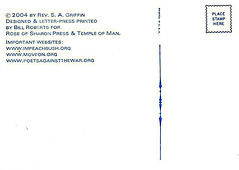 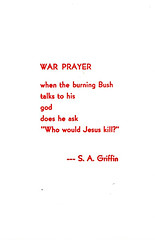 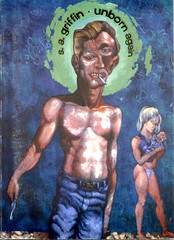 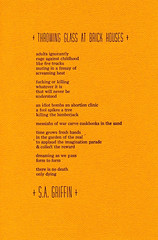 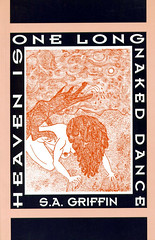 Heaven Is One Long Naked Dance 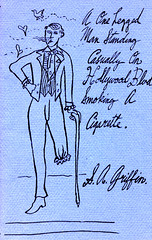 A One Legged Man Standing Casually On Hollywood Blvd. Smoking A Cigarette 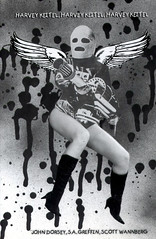 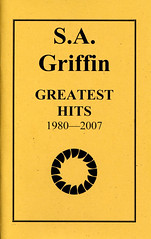 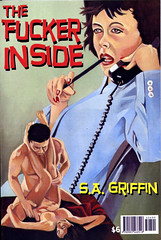 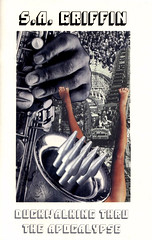 2003 Bottle of Smoke Press. Chapbook with full color cover, original collage by S.A. Griffin. 18 pages, includes centerfold, full color image of Griffin’s billboard poem, “I Choose Not To Believe In War Holy Or Not” which was at the corner of Sunset / Hillhurst & Hollywood during August 2002. Limited edition of 100, sold out, extremely rare. 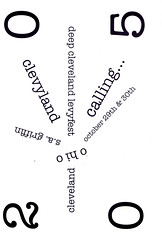 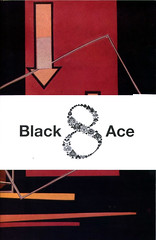 2007, Temple of Man. Dust jacket with band. This is the “Infinity Issue”, created as a tribute to Venice West progenitor, poet, artist and friend Tony Scibella who passed away in October of 2003.

Published by S.A. Griffin for Temple of Man. Edited by Marsha Getzler, S.A. Griffin and John Macker. Fantastic original cover art by Black Ace Books’ Rose Idlet. Truly beautiful dust jacket/collage by artist and poet Steve Wilson, one of Tony’s closet pals. This is a very special book which includes poetry, art, flyers and remembrances by many who created the scene, their children, peers and friends. Beats, beatniks and those who carry on. Offset, 139 pages. Includes an entire section of Tony’s poetry. 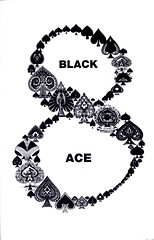 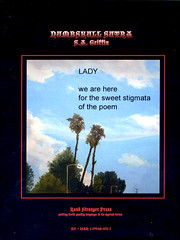 2007, Rank Stranger Press. Cover art by S.A. Griffin, back cover art by Diana Bonebrake, introduction by Carter Monroe. Edited by John Dorsey and David Smith, 296 pages. Very limited run of 200, out of print, extremely rare. Many original flyers, art and images reproduced inside from punk rock era to present in Los Angeles as well as readings and performances over the last 25 years. Signed by S.A. Griffin, 30 EURO, signed by Griffin and Diana Bonebrake, 40 EURO. 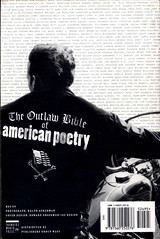 The Outlaw Bible of American Poetry

with S.A.Griffin and Alan Kaufman on the front cover are out of print and extremely rare. Signed by S.A. Griffin.

0 Replies to “todd moore | dancing in the fire with s.a. griffin”