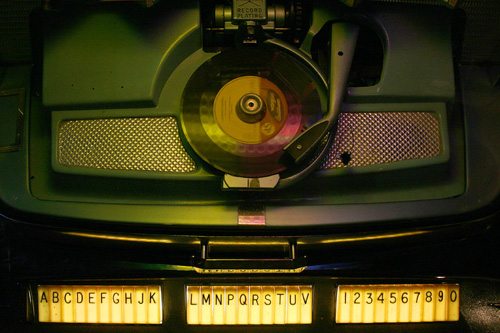 The Shamrock Bar Circa 1976

I selected Cozy Cole, Johnny Cash and
Santana on the jukebox. The kick-ass chicken fried
steak
was melting in
your mouth;
and I was
buying rounds,
spending
the major portion
of my rent money,
springing for drinks
for the bar. I set them up
more nights
than not.
I drank a lot that year, in and out of bars
along the streets of East Hollywood. Two in the morning
going way out to Barney’s Beanery
at the other end of town, very stoned
looking for
a bag of weed, maybe some
Acapulco Gold. My rent was cheap,
$110 a month
for a tiny, but comfortable house
in back of a bigger house. The electric
and garbage were included
with my rent. I was making around $600 a week
running an adult bookstore and a little
now and then from the writing. Though I was
drinking close to a $100 a week and another $25 or $30 on
weed. That night I was in two fights. Walking
into one bar, in the Roosevelt Hotel, punching a guy up the side
of the head over his girl friend.
I had come on to her when he’d walked to the
restroom, but he did threw the first
punch. I let go with
a sharp left jab to his nose and a roundhouse
right to the temple. He went down hard,
his girl friend screaming
like a rose in a jar of piss. The bartender jumped over the bar
with a nasty
looking
black jack in his hand. I chopped him
in the throat when his feet hit the floor and he went down to his
knees choking. I ran out of the
bar, down Hollywood Boulevard
about 3 blocks and
into The Bunnyhole, a joint that had
become one of
my hung outs, run by Miko,
a pretty little part-time hooker,
who had come over from Vietnam shortly after Saigon fell a
few years before. The place was jammed up with people
a couple rows deep at the bar. l saw Miko standing at the other
end of the bar talking to one of the waitresses. My eyes must have
been wild. I saw
hers frown,
her large black opals
boring
into mine. There was recognition in her look,
a psychic sense wavering
over the distance of all the
lost
and drunken souls between us. But what she saw was rage in my eyes,
and it didn’t take a mind reader
to know there was
trouble
afoot.
I had had a taste and was ready for the
next one, and I knew there would be a next one. I was on an
ass kicking roll. I was staggering just inside the door, trying to keep my
balance, trying not to look totally berserk.
Miko was pushing through the crowd to get to me. I relaxed for an
instant and leaned against what I thought was the door frame.
But the door frame suddenly moved and barked, “Get the fuck off
me you stinking drunk.” It was huge guy
in a
brown leather jacket, who promptly shoved me with both arms
into
the real door frame. My head hit hard and I thought
I was going out, and then I crashed to the floor.
By that time Miko got to me and was leaning down. “You okie-dokie?”,
she asked, her eyes full of concern and fear.
I told her I thought I was fine
and checked the back
of my head
for blood.
It was sore as hell and a bump was forming.
Her and some guy helped me up. The asshole who had
shoved me was now standing
at the bar with his
back to me laughing with his friends as if nothing happened.
Miko told me I should go home and sleep it off, and was gently,
with pleading eyes pushing me toward the door.
I told her I needed a glass of water. I lied just to
get her out of
the way.
When she went for the water
behind the bar, I walked over to brown leather jacket,
tapped him on the shoulder,
and when he turned,
I crouched slightly and hit him in the nuts with my right fist as hard as
I could muster. When he bent over yelling sharply from the pain,
I pulled his jacket up over his head and turned him back around,
banging him forcefully once, then again, head first
into the oak bar apron. I let him loose and he fell to the barroom floor,
trying feebly to untangle himself from his jacket. Just to make sure I let go
with a booted foot to his face. I turned and ran out of the bar and back up
Hollywood Boulevard to Vine. I ended up eventually there at
the Shamrock bar on Santa Monica, playing the jukebox and eating
chicken fried steak. There I met Susan, a would-be actress, who was staying
at the Tropicana Motel down the street. She was
there to hopefully met Andy Wahol, who was casting
a film in one of the rooms. She had
this fantasy about fucking him for a major role in it.
Everybody knew he was gay, but she thought
she could turn him straight. Fat chance.
I didn’t mind her delusions, we all need them in a world that
is a delusion in itself She was kind and wild, and the sex was wilder. She had
beautiful raven hair, her nipples dark dark brown,
eyes like sea and sky.

“The Shamrock Bar Circa 1976” will be appearing in my large collected volume coming out from de/a/d/b/e/a/t press & Epic Rites Press at any day from now.