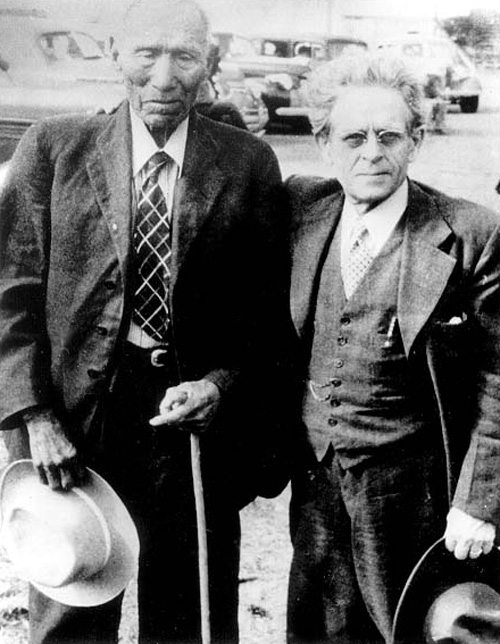 (For John G. Neihardt, a meeting in Columbia, Missouri)

“The original Ghost Dance religion… was initiated by Wodziwob in 1870… A new…Ghost Dance movement (was begun) in the late 1880s, by Wovoka, a Paiute shaman…”—The Religious Movements Homepage.

“The Wanekia held out his hat for them to look into; & when they did this…saw there the whole world & all that was wonderful.”—John G. Neihardt, Black Elk Speaks.

Wovoka awoke in a reverie of Wodziwob,
full of fever, in the middle of a dream of flying,
descending from a vision of his death in the cloud mountain sky
where he spoke to the Great Spirit in Paiute,
had a revelation as he saw two great circles become one
in the first solar eclipse of 1889,
pulled in the kite of his mind which had flown so high
in dream-like exhaustion from chopping wood,
returning it to the circularity of rings
in the crosscut concentric patterns
of firewood at his feet.

Wovoka revealed to his believers
they would be saved
when new dirt skin covered the earth,
smothering the invaders, re-balancing natural order,
stone with butterfly, tree with wolf,
resurrecting ancestors from the ghost world,
re-centering the O of their Origin,
opening gates to secret corrals of vanished bison,
if his people practiced as ritual
the five-night Dance of Re-Creation,
men and women holding hands,
moving around the Ghost Dance Circle,
invisible to Death in glide and flutter
as their ecstasy of shuffle and song
pulled them up into a trance-spiral
from dusty Round-Dance
on the ground of this world
into helixed coils
reaching to sky mountain clouds
which they breathed in

like smoke of a ceremonial pipe,
leaving the air as clear as summer dusk
where whippoorwills called from cottonwoods
along banks of a lazy river.

“…I floated head first, face down, with arms extended…began to come down feet first at the center of the hoop…then I fell back into my body.” —Black Elk.

Wovoka and his Ghost Dancers
created sacred space,
hand in hand,
turning like a wheel
around the center-pole axis,
surrounded by circular drumhead rhythms
along a dream-spiral path,
singing:

“There is dust in the air
from whirlwind mountains,
buffalo will return
riding it down from the sky,”

dancers chanting the circumference,
the dream diameter
of the circular shuffle
whirling in their minds,
kicking up dust devil spirals,
whirligigs between earth and sky
like lassos of a master twirler
pulling dancers together
with a rope of dust.

as they dance the loop of steps
encircling themselves with their own voices,
faces painted for the Other World,
sidestepping around their orbit

sideways to the wind,
powered by trance-dancer sounds
spanning the dust devil whirlpool vortex
around a spindle of emotion,
the levitating ritual dance-ring rising
like a heavenly body in rotating pivot,
chanting the perimeter of lariat twirl,
whirlwind funnel between worlds,
revolving sacred wheel,
to return what was lost in the Death Song,
Ghost Dancers enchanting themselves
back toward paradise places,
turning the ghost dance shirt
inside out to see the future,
trying to escape the noose of oppression
by dancing the deja vu
in a vision where they sing
to the sacred white buffalo,
Wovoka levitating above it
with his big, black Stetson hat,
his prophecies, blessings, rain to the drought,
Ghost Dancers of the Woodcutter Messiah
dancing life back into balance,
in a trance
where you talk
to the ghosts
you know.

“It is hard to follow one great vision in this world of darkness & many changing shadows. Among those shadows men get lost.”—Black Elk.

I am no longer Wovoka,
I am a voice in the air
floating above the horizon.
I speak to you from every corner
of our wilderness place:

I see rain coming to break the drought.
I see an earthquake after I die.
I see my grandson flying in the air.
I appeared to delegations of many tribes
who came to see me on their way home
as a vision
dancing in a circle
my face painted red
telling them songs to sing.

“Let the dances continue. The coming of the troops has frightened the Indians. If the 7th –Day Adventists prepare for…the Second Coming of the Savior, the U.S. Army is not put in motion…Why should not the Indians have the same privilege?”—V. McGillycuddy, former Indian Agent.

“The Pioneer has before declared that our only safety depends upon the total extermination of the Indians. …we had better… wipe these untamed & untamable creatures from the face of the earth.” – L. Frank Baum, editor Aberdeen (SD) Pioneer, Jan. 3, 1891, later, author of The Wizard of Oz.

Kicking Bear, Short Bull, Good Thunder,
Lakota leaders from the East
came to see the new Messiah
Wasichus called Jack Wilson,
the Paiute called Wovoka,
Lakotas called the Wanekia,
the “one who makes live,”
and others called the Woodcutter,
who forbade alcohol and violence,
preached spiritual cleansing,
prayer, meditation, chanting,
the Golden Rule, peace with the Wasichu
until the dance brought back the lost world
and the invaders disappear.

Wasichu, having killed most of the buffalo,
forced the Lakota onto reservations,
hunter-gatherers made to farm in a year of drought
which produced no food,
then cut their rations in half
because they said they were too lazy
to feed themselves, needed to learn
the lesson of starvation.

The three Lakota leaders
returned from Wovoka
as disciples of the Ghost Dance,
believed he was Son of the Great Spirit,
saying:

“When the Son came
to the Wasichus
they killed him, so now
He comes to the Indians.”

They told Sitting Bull of their visions,
spread the new religion to all corners of Lakota land.
The desperate rhythm of Ghost Dance circles
grew by thousands of feet joining One with the Other,
curling like smoke
into floating hummingbird hover,
looking down on the trance-chant shuffle dance,
wearing protective ghost-shirts,
painted, feathered, like deerskin armor
they believed would deflect bullets and arrows.

The Wasichu panicked, called in the army,
sent police to arrest Sitting Bull who was
shot to death, even though
not an adept of the Ghost Dance.

After the death of Sitting Bull,
his half-brother Big Foot led his band away,
but was forced to camp at Wounded Knee Creek,
surrounded by soldiers.

When a gun went off while soldiers tried
to disarm Lakotas, the massacre began
with Hotchkiss guns from hills above,
rifles below firing point-blank at scattering people.
Lakota warriors fought back,
opened an escape corridor for those who could flee,
but hundreds died along with Big Foot,
all left on the battlefield frozen in grotesque positions
in the winter when it snowed on desperate hope,
dancers disappeared into circles of earthly eclipse.

Out of the stiff bodies, Ghost Dancer spirits,
in their last upward whorl
into cloud mountain caves,
circled like wisps of secret memory
into other centuries
waiting for the end of the eclipse,
returning to hover
over native warriors
at the 1973 battle of Wounded Knee,
confronting Wasichu culture
with images it didn’t want to see,
history it forgets on purpose,
stories never taught in schools
of how they tried to kill
all natives of the lands they invaded,
bounties paid for heads of California Indians,
forced death marches,
culture-killing boarding schools
to eradicate language, families, native religion and culture,
countless massacres of glorious genocide
celebrated as Winning the West,
as Wasichu wear ghost-shirts of psychic armor
to deflect their own guilt,
preferring ignorance of facts,
the shroud of lies in textbooks,
from politicians trying to turn away
bullets of the truth,
arrows in the shriveled heart of the nation,
as we stand on the sidelines of our own history,
frozen grotesque cadavers of denial
distorted by the rigor mortis of ignorance,
trying to make circles into rectangles. 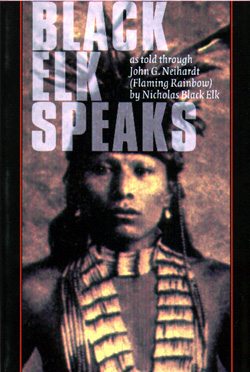 The poem is based on the true story of the Paiute shaman Wovoka, founder of the late-Nineteenth Century American Indian religion called the “Ghost Dance” religion, which was a response to the Indian’s oppression by white Americans. I have put it into the form, in part, of trying to recreate the trance-dance movements and chanting of the ceremonies of the religion. There was a first wave of the “Ghost Dance” religion prior to Wovoka, by another Paiute shaman, Wodziwob, and Wovoka was following his lead, though several years later.

I dedicate the poem in part to the famous author of BLACK ELK SPEAKS, one of the great works about American Indians, John G.Neihardt, whom I met in the 1960s when I was a student on the University of Missouri campus in Columbia, Mo., and he was a retired professor emeritus who still came to the campus to use an office (he was still writing)… Gary L. Brower, June, 19, 2009

Editor’s Note: Black Elk Speaks can be read from chapter 1 to chapter 25 by clicking here…

The book “Black Elk Speaks,” by John G. Neihardt (New York: Washington Square Press, 1972), originally published in 1932, recounts Black Elk’s visions and his ritual enactment of them for his tribe. The book is Neihardt’s recreation in English of the oral history that Black Elk, a spiritual leader of the Oglala Sioux, recounted for him in the Sioux language in 1931. Critics of Neihardt’s book claim much of his account about Black Elk is fiction.

Much more on John G. Neihardt can be found on the Neihardt Foundation web page here…