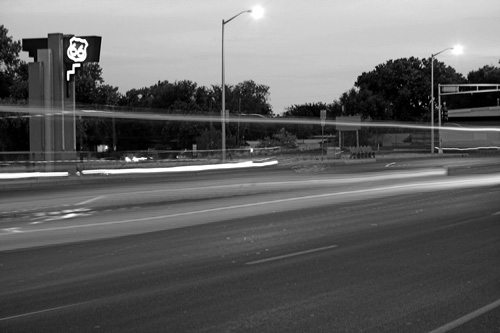 Route 66 east of Albuquerque
worth a turnback if you’ve missed
the exit, find yourself in Thoreau:

Maybe the waitress is Mary Lou?
She who was Cassady’s wife, really
Carolyn. Except she isn’t.

Mary Lou is black and blue.
Turn her face to the corner
till she comes to. Except she isn’t.

Like my friend who is just herself
clearly says, “Be sure to see what’s
on the wall in the women’s room.”

Not that ditty or graffiti but photocopied
message, “Love isn’t supposed to hurt
you; love doesn’t abuse.” Mary Lou.

Twenty or more of those little strips
you can rip off to have a number you
can call, already taken. One left.

You wonder how many there’ve been,
how many women besides these nearly
fifty ripped off a small piece of hope

There in that one spot, while the waitress
poured hot coffee, served grits, Route 66
in Moriarty, New Mexico, near Thoreau.

No way to know.