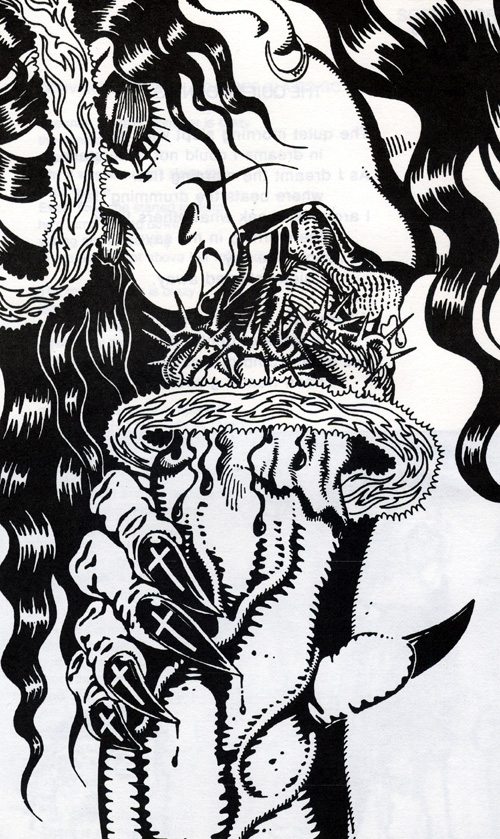 OUR LADY OF SIMULTANEOUS ORGASM

St. Louis the Absurd had heard that a young prostitute
had been performing miracles at the Shrine of Our Lady
of Simultaneous Orgasm in Laodocea.
The impotent and sterile travelled thousands of miles
from every direction to touch the hem of her garter belt.
“Who fucked me?” she once asked at an orgy,
“I felt the power go out of me.”
“I fucked you Mistress!” replied a syphilitic young man,
“And I am healed!”
Our Blessed Lady took pity on him and said, “Go, and fuck some more.”
She also encouraged him, and the rest of her followers, to use condoms.
St. Louis the Absurd was intrigued by what he heard
and travelled to Laodocea to witness these miracles for himself
Being 400 years old, St. Louis had not had sex since the time of Noah.
He just couldn’t get it up anymore.
However, despite his inability to perform, his pilgrimage to the Shrine
proved worthwhile. Our Lady of Simultaneous Orgasm resurrected his
dead member and sucked him dry. Still hard, she mounted him
and fucked him all the way to his four-hundred-and-first birthday.
St. Louis the Absurd became a true believer,
rented a room in a run-down section of Laodocea
and made a series of unprecedented tax-deductable
contributions to the Shrine.