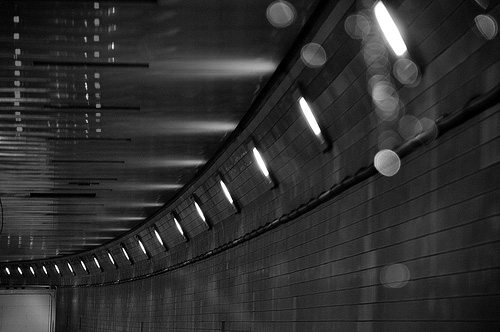 The Man in the Booth in the Midtown Tunnel

* As a kid I always wondered about the man in the small booth in the middle of the Midtown Tunnel; the tunnel in NYC that goes from the borough of Queens to Manhattan.

The cars stream
under a frozen
catatonic
East River.
And the man
in the booth
paces the perimeter
of his cage.

He fumes
with the fumes.
And feels
the river’s pressure
above his head.
And he has
lost his face,
long ago
in a blue uniform.

And the sun
and the fresh air,
merely a hint.

And we are
faceless and a blur,
behind thick plates
of light-bleached glass.
And we will
all remain
ignorant of
each other.

And there is
no light
at the
end of
the Midtown
Tunnel. 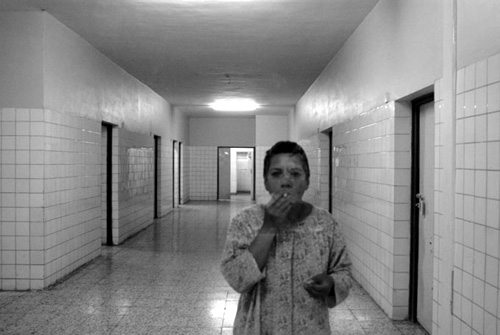 Lost Girl on the Psychiatric Ward

Standing in the middle of the ward
A thin scrim of sweat
Glistens on her nascent mustache
Apologizing to the thin air
her hands on her hips–
Disgust for the phantoms.

She is on guard
for the vulpine machinations
of the silent, incessant voices
chattering in her cortex
a murderous Greek Chorus
slapping at the hollows
of her skull.

was born in Manhattan, N.Y. on July 5, 1955. A small press activist, he founded the Ibbetson Street Press in the winter of 1998 in Somerville, Mass. He has published over 40 books of poetry of local and national poets and over 20 issues of the literary journal Ibbetson Street. Doug Holder is the arts/editor for The Somerville News, a co-founder of “The Somerville News Writers Festival,” “Newton Free Library Poetry Series” and is the curator of the in Newton, Mass. His interviews with contemporary poets are archived at the Harvard and Buffalo University libraries, as well as Poet’s House in NYC. Doug Holder’s own articles and poetry have appeared in several anthologies including: Inside the Outside: An Anthology of Avant-Garde American Poets (Presa Press) Greatest Hits: twelve years of Compost Magazine (Zephyr Press) and America’s Favorite Poems edited by Robert Pinsky. His work has also appeared in such magazines as: Rattle, Doubletake, Hazmat, The Boston Globe Magazine, Caesura, Sahara, Linden Lane, Poesy, Small Press Review, Artword Quarterly, Manifold (U.K.), The Café Review, the new renaissance and many others. His two most recent poetry collections are: “Of All The Meals I Had Before…” ( Cervena Barva- 2007)) and “No One Dies at the Au Bon Pain” ( sunyoutside-2007). His collection “THE MAN IN THE MIDDLE OF THE MIDTOWN TUNNEL” went out in 2008. ( Cervena Barva Press) Doug Holder holds an M.A. in Literature from Harvard University. “A journal and publisher of poetry.”

Ibbetson Street publishes the best of the small press. Our press is nationally distributed. We have received notice in The Boston Globe, Harvard Review, Small Press Review, PRESA, and other repsected journals. We have published poetry books by Robert K. Johnson, Gloria Mindock, Abbott Ikeler, Helen Bar Lev, Lo Galluccio, Irene Koronas, Molly Lynn Watt, Patricia Brodie, Linda Larson and many others. Ibbetson Street has been featured on TV shows on Newton Cable, Boston Cable, Cambridge Cable, Somerville Community Access TV, as well as a feature on MIT Radio. Our magazines and books are carried at a host of independent bookstores in the area. Ibbetson Street is now listed in the Index of American Periodical Verse. DORIAN BROOKS, a poet and an independent scholar in women’s history, has published widely in the small press and in one book–A Pause in the Light. | RICHARD CAMBRIDGE’s, award-winning poetry, including the Master’s Slam (1997 National Poetry Slam) often explores issues such as the impact of the US blockade on Cuba. He curates the Poets’ Theater at Club Passim in Cambridge. | LINDA HAVILAND CONTE; began her study and practice of poetry at Connecticut College with William Meredith. She helped produce the Poetry at the Media Lab series at MIT. | ED GALING | RALPH HASELMANN, Jr. | DOUG HOLDER, is the founder, publisher and co-editor of The Ibbetson Street Press. His work has appeared in BostonPoet.com, FRESH! Literary Magazine, Boston Globe, Spare Change and others… | JOANNE HOLDRIDGE, is an instructor a Bunker Hill Community College in Chalesown, MA. Her work has appeared in Pinyon Poetry, whiskey Island, Wisconsin Review, Spare Change and others. | ROBERT K. JOHNSON, is a retired profesor of English at Suffolk University. He has been published widely and rns the Newton Free Library poetry reading series. | B.Z. NIDITCH | JACK POWERS, the founder of the Stone Soup Poets, has produced over 1,500 consecutive weeks of poetic performances. He has read in Europe, Russia, and the U.S. Jack is one of five recipients of the first Anne Bradstreet Lifetime Achievement Awards. | LYN LIFSHIN | SUE SULLIVAN, is an expressive therapist and a regular contributor to The Ibbetson Street Press. Her work has also appeared in Spare Change and Pine Island. | RICHARD WILHELM worked as a VISTA volunteer in 1969-1970. He has exhibited paintings at the Piano Factory in Boston and at Cambridge Center for Adult Education. He is the Art Editor at Ibbetson Street Press. | MICHAEL ZACK | and more!