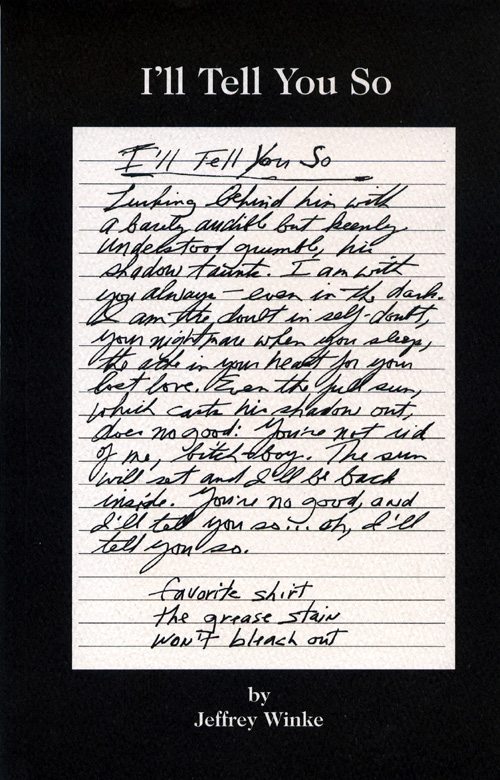 Forget what you may know about haibun. Forget prose poems. Prose plus poetry on a single page. The “journey thing”—going back to Basho. Travel notes. Diary. Autobiographical. Sparse, terse, lean observations. Nature. Everydayness. Begin with a little prose, then a slam-dunk haiku-ending: 5,7,5. Or—whatever works, if it looks like a poem. (Put ancient art forms in the hands of American writers, and they’ll make something else of it all over again.) How about a haiku-like opener, some prose, -and a killer haiku closer—where the final meaning comes to rest, takes you elsewhere? Revelation. Epiphany, THE END. The land of Ah…

Give it a rest. There’s something more important going on here. Something about Jeff Winke’s masterful work in I’LL TELL YOU SO that rises above definition, all the mish-mash (Japanese for ‘too much”) which leads, inevitably to a label, a set of instructions, a fad that suggests (to me), in a mindful way of nonthinking, that in the end and in the beginning, it’s not about haibun, haiku, hokku, haiga, etc…leading one down the true path. It’s about writing.

“Eastern literature to me is pure writing,” Winke will tell you. “Because it is direct, stripped of embellishment, and achieves a prizefighter’s punch without the help of Western devices such as simile and metaphor, it is painfully difficult to write.”

It’s about the art of attempting to suggest something extraordinary about almost, precisely nothing—with beauty, understanding, feeling. The whole picture.

It’s about Oku-no-hosomichi… that narrow path/road to (depending on the translator)…”the North,” “Far North,” “Deep North,” “the Interior,” where Basho found himself. The interior where others continue to journey, explore, tell us about. The way Jeff Winke does, now…in words that rise above the page.

Down that big city street…into that coffee shop…beyond the door of that jazz club…up those cement stairs…inside that room, gallery, warehouse, Army-Navy surplus store… in the eyes of that woman…

…coming unexpectedly into the space of an old building—the writer Winke, on a daily sojourn, perhaps pauses, records, reflects, remembers…scribbles a few notes…there is something going on here…eventually shaping it into art:

Certain parts of the city are becoming trendy now. Buildings built for heavy loads, soapy wash downs and real work are now cleaned up, burnished, and sealed with polyurethane. Beautiful people with soft hands and ocean-breeze-deodorized bodies now eat, drink, and dance where machines ground, churned, and spat out gears, fittings and couplings. Strong workers not afraid to sweat gave the space its patina where flavored martinis are now sipped.

neon lit
the faint odor of diesel
drifts past

Let it all speak for itself. Find the language to tell it. Leave it in the mind’s eye of the reader to behold. — Norbert Blei

My haibun capture the inane, remarkable, or imagined episodes of everyday life. The flash prose or brief personal recollection becomes a pivot for a concluding haiku that is consistent in tone – not an extension or explanation – to the story. When successful, the haibun chimes true in the reader’s mind like a Tibetan tingsha bell rung on a misty Spring morn. Jeffrey Winke

It’s downright eerie. I’m sitting on the deck of this house I rent here in northern Wisconsin woods. No sounds except for an occasional bird call. There’s a wild turkey out here gobble-gobbling, which is very Thanksgiving-like. Too bad it’s April. Holy cow, now some truly pissed-off little red chipmunk-looking squirrel is chirping madly and flicking its tail all around. He’s making quick spastic movements and is staring right at me with its beady black eyes. I don’t know what I did to irk this fur clump, but the spitball has it in for me. My first thought was to go back inside, but then I thought — ‘no, I’m on a man-made structure here, it’s not like I just pissed on a pile of his acorns.’ He’s still chirping and flicking his tail all about like some kind of spastic. So I stand to my full height and growl back at him “Simmer down chump, go take some meds.” He retreated a few feet, so I think he got the message. You see, that’s what I don’t like about this nature stuff. I’m sitting here minding my business and suddenly I’m thrust into this whole man vs. beast conflict thing. This forest rat is jammering at me like I’m driving a Caterpillar in clear-forest mode through its space. I just want to co-exist and enjoy the silence but this mutant spawn — half chipmunk, half squirrel has a nasty attitude. Now, that’s probably not being fair…I shouldn’t get down on his heritage. As far as I’m concerned, the forest is like Vegas — what happens here, stays here. So, I’m O.K. if squirrels occasionally get frisky with a chipmunk or two. Love is love. The poor little guy — he’s probably teased a lot for being an inter-species half-breed. “Ahhh, come back here little guy….I’ve got some peanuts — they’re Gajun-flavored dry roasted…look, you don’t have to mess with the shells.”

Jeffrey Winke lives in Milwaukee, Wisconsin in a downtown industrial loft with his wife, two-thirds of his children and a posse of four cats where he plies his skills as a PR counselor, magazine editor and adjunct university professor at the Milwaukee Center of Upper Iowa University.

Jeffrey Winke co-edited the first small press North American haiku anthology, the Third Coast Haiku Anthology, published in 1977. His most recent book, What’s Not There: Selected Haiku of Jeffrey Winke is a 2002 Merit Book Award winner. His motion graphis haiku collection called Chances can be viewed here…and has been designated a “Cool Website.”

Some other books by Jeffrey Winke are available by clicking here…

0 Replies to “jeffrey winke | i'll tell you so”