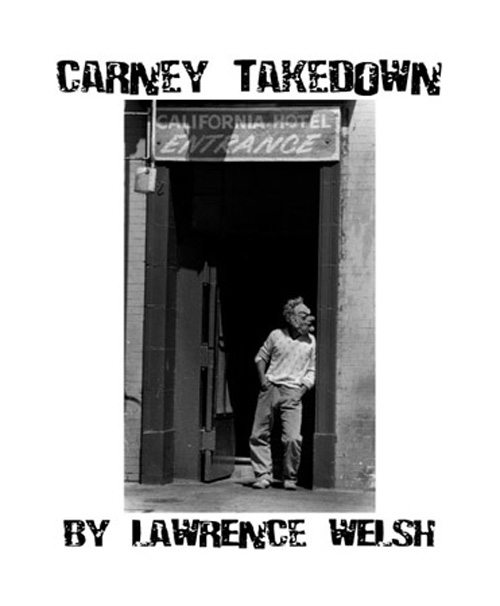 Introduction by Jonathan Penton. I first heard about Lawrence Welsh when visiting Los Angeles in 2002. My friends told me about the poet and punk musician, co-founder of the Alcoholics, long-since departed for El Paso, Texas, where he lived dry. Just a year later, I had the chance to observe firsthand how very odd the idea of going to El Paso to dry out is.

But Lawrence was raised in South Central Los Angeles, an urban environment that bears little geological resemblance to the nearby Mojave Desert. And now that I’ve made the twelve-hour drive on I-10 East out of L.A., Lawrence’s journey makes perfect sense—past Joshua Tree, through Phoenix and the reservations, across the southern New Mexico desert and into the heart of the Chihuahan region, followed by those few miles south with the Rio Grande, then the ASARCO copper smelter, and finally Cuidad Juárez directly to the passenger side of one’s car—”dry” doesn’t begin to cover it. Leaving Los Angeles, Lawrence must’ve felt like he’d entered a post-apocalyptic fairyland.

When one looks at the increasingly sparse poetry Lawrence has written over the past ten years, one is reminded of that cottonmouthed journey. Comparing this book to 1999’s Rusted Steel and Bordertown Starts, one sees many of the same themes and philosophies, but the change in tone is startling. One gets the feeling that the poet walked into the desert, abandoned his clothes, then his skin, and scratched absentmindedly at his musculature as he wrote.

Carney Takedown, as the name implies, is about those things which are perpetually ending, and their inescapable connection to those things which begin. One important key to these subjects is the understanding that humans are a part of this cycle—a necessary part, and only one of many. It is difficult to get that perspective in Los Angeles County, but it is an essential realization in the Chihuahuan Desert. We are privileged to combine Lawrence’s poems with the paintings of El Paso’s Bill Rakocy, whose work, while essentially humanistic, shows the elementary nature of our existence. Not all of the poems and paintings in this book are set in the Southwest, but they all seem perfectly at home in ghost towns like Orogrande—reminders of the role of our complicated species in this diffuse, barren world.

Carney Takedown contains twenty poems by Lawrence Welsh, four paintings by Bill Rakocy, and cover art by Peggy Peattie. It’s printed by Make It New Media. Buy it now! Right. Now. For $8. And please check out these selections from the book:

collect
cottonwood
at the pass
its promise
leaves
a stranger
of barrio ways
to see what
repose or response
is leaning:
13 to 1
will litter
will master
and hammer
medicine
to smoke
the wormwood
out

What people are saying about Lawrence Welsh:

“Lawrence Welsh is a shaman with words. He whirls flowers and moons and skies and adobe mud around and around and mixes them with his hard-won wisdom. He scrapes his initials into them with his soul’s white tooth.” —Jimmy Santiago Baca, author of Immigrants in Our Own Land

“Lawrence Welsh doesn’t pen and ink his poems, he uses his fingernails and martyrs blood. He’s a sleeping insomniac with both eyes open. Watch out for these poems, for they are made with a passionate, witty, indomitable dynamite. Read what’s in this book before it explodes in your hands.” —Michael C. Ford, author of Emergency Exits: the Selected Poems

“Lawrence Welsh declares and maps the turf he rides with clarity, sympathy, responsibility and edge.” —David Meltzer, author of San Francisco Beat: Talking with the Poets

“Lawrence Welsh’s spare and often startling images of the Southwest—pinon, black mesa, the ‘bones holding pictures of you’—haunt with what’s left out and make me wild to be in the desert again.” —Lyn Lifshin, author of Barbaro, Beyond Brokenness

“Welsh’s voice has the capacity to deal with so much in such packed, lucid spaces. The poems are social, philosophical, political, place specific, universal, idiosyncratic, cross cultural, and his ear is so sensitive to other voices that even a few words gives form to tradition. I love his work, especially when South Central Los Angeles, El Paso, Ireland, poetry and newspapering all come together in one packed evocative piece after another.” —V. B. Price, author of Albuquerque: A City at the End of the World