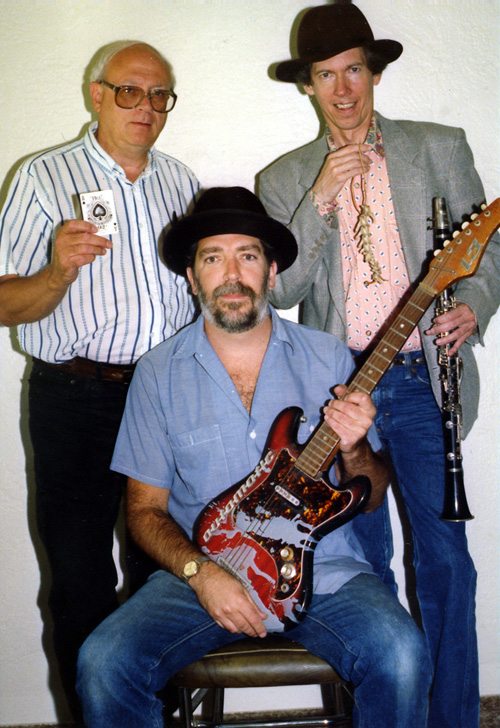 Todd Moore, Tony Moffeit and Mark Weber. 8 august 1992. Important: These Fugitives Should Be Considered Dangerous And Might Possibly Be Armed. NEVER Attempt To Arrest Or Apprehend These Subjects Yourself.

with Todd’s wife Barbara this morning, and finally Todd’s body has been released by the coroner’s office of Tucson, who apparently loves red tape and confusion and making things complicated. Today, as I write this his body is flying back to Chicago, and Barbara and the family, Todd’s two sons, Theron and Jason, and their wives and children will fly tomorrow.

The funeral will be Monday in Freeport, Illinois, Todd’s old hometown. Rt. 20 heads due west out of Chicago and 65 miles down the road Todd will ride through Rockford where he taught and lived for 30? years before they moved to Albuquerque in 1994? 1993? I don’t remember exactly. And then another 25 miles west to Freeport.

We’ll have a memorial gathering at Todd & Barbara’s house in Albuquerque in a few weeks.

Todd died of a cardiac event precipitated by his long-time stomach ulcer. Barbara said Todd was perfectly normal all day as they explored Tucson with her brother and sister-in-law. I think she said they played cards that night after a dinner out. It was only later in the evening that Todd said he didn’t feel well but wouldn’t let her call for a doctor. They went to bed but by 4am she had to call 911 emergency and an ambulance took him to hospital. His blood analysis at that time showed high concentrations of acid most likely originating from his ulcerated & necrotic part of his intestine which initiated the septic event that stressed the heart and he died around 6:30am Friday March 12. He was a brother and a friend. We still have cans of Sprite in the refrigerator we kept especially for his visits. I’m going to miss him.