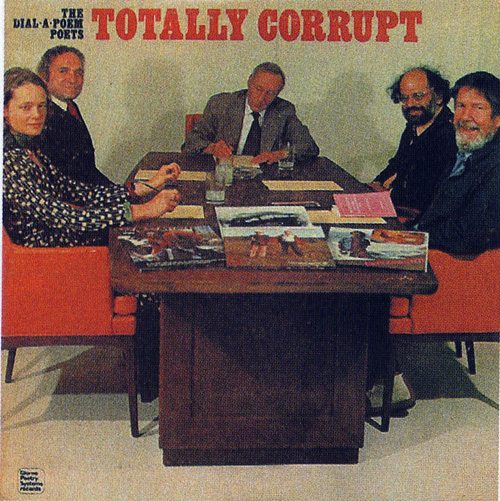 One day a New York mother saw her 12-year-old son with two friends listening to the telephone and giggleing. She grabbed the phone from them and what she heard freaked her out. This was when Dial-A-Poem was at The Architectural League of New York with worldwide media coverage, and Junior Scholastic Magazine had just done an article and listening to Dial-A-Poem was homework in New York City Public Schools. It was also at a time when I was putting out a lot of erotic poetry, like Jim Carroll’s pornographic “Basketball Diaries,” so it became hip for the teenies to call. The mother and other reactionary members of the community started hassling us, and The Board of Education put presssure on the Telephone Company and there were hassles and more hassles and they cut us off. Ken Dewey and the New York State Council on The Arts were our champions, and the heavy lawyers threatened The Telephone Company with a lawsuit and we were instantly on again. Soon after our funds were cut, and we couldn’t pay the telephone bill so it ended.

Then we moved to The Museum of Modern Art, where one half the content of Dial-A-Poem was politically radical poetry At the time, with the war and repression and everything, we thought this was a good way for the Movement to reach people. TIME magazine picked up on how you could call David and Nelson Rockefeller’s museum and learn how to build a bomb. This was when the Weathermen were bombing New York office buildings. TIME ran the piece on The Nation page, next to the photo of a dead cop shot talking on the telephone in Philadelphia. However, Bobby Seale, Eldridge Cleaver and The Black Panthers were well represented. This coupled with rag publicity really freaked the Trustees of the museum and members resigned and thousands complained and the FBI arrived one morning to investigate. The Musuem of Modern Art is a warehouse of the plunder and rip off for the Rockefeller family and they got upset at being in the situation of supporting a system that would self-destruct or self purify, so they ordered the system shut down. John Hightower, MOMA Director, was our champion with some heavy changes of conscience, and he wouldn’t let them silence us, for a short while. Then later John Hightower was fired from MOMA and Ken Dewey recently flying alone in a small plane crashed and died.

In the middle of the Dial-A-Poem experience wqas the giant self-consuming media machine choosing you as some of its food, which also lets you get your hands on the controls because you’ve made a new system of communicating poetry. The newspaper, magazine, TV and radio coverage had the effect of making everyone want to call the Dial-A-Poem. We got up to the maximum limit of the equipment and stayed there. 60,000 calls a week and it was totally great. The busiest time was 9 AM to 5 PM, so one figured that all those people sitting at desks in New York office buildings spend a lot of time on the telephone, then the second busiest time was 8:30 PM to 11:30 PM was the after-dinner crowd, then the California calls and those tripping on acid or couldn’t sleep 2 AM to 6 PM. So using an existing communications system we established a new poet-audience relationship.

Dial-A-Poem began at the Architectural League of New York in January 1969 with 10 telephone lines and ran for 5 months, during which time 1,112,337 calls were received. It continuted at MOMA in July 1970 with 12 telephone lines and ran for 2 and a half months and 200,087 calls were received. It was at The Musuem of Contemporary Art, Chicago for 6 weeks in November 1969 and since then has cropped up everywhere. This was with equipment working at maximum capacity and sometimes jamming the entire exchange. At MOMA, the 12 lines were each connected to an automatic answering set, which holds a pre-recorded message. Someone calling got randomly one of 12 different poems, which were changed daily. There were around 700 selections of 55 poets.

On this LP of Dial-A-Poem Poets are 27 poets. The records are a selection of highlights of poetry that spontaneously grew over 20 years from 1953 to 1972, mostly in America, representing many aspects and different approaches to dealing with words and sound. The poets are from the New York School, Bolinas and West Coast Schools, Concrete Poetry, Beat Poetry, Black Poetry and Movement Poetry. — John Giorno, August 1972