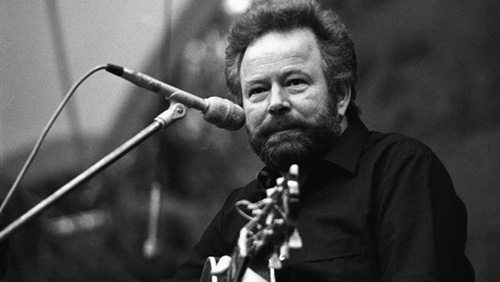 Franz-Josef Degenhardt (3 December 1931 in Schwelm, Westphalia – 14 November 2011 in Quickborn) was a German poet, satirist, novelist, and – first and foremost – folksinger/songwriter (Liedermacher) with decidedly left-wing politics. He is also a lawyer, bearing the academic degree of Doctor of Law.

After studying law from 1952 to 1956 in Cologne and Freiburg, he passed the first German state bar examination in 1956 and the second in 1960. From 1961 he worked for the Institute for European Law of the University at Saarbrücken, where he obtained his doctorate in 1966. Degenhardt joined the Social Democratic Party of Germany (SPD) in 1961, but was forced out in 1971 because of his support for the German Communist Party (DKP), which he joined in 1978.

From the early 1960s onward, in addition to practicing law, Degenhardt was also performing and releasing recordings. He is perhaps most famous for his song (and the album of the same name) Spiel nicht mit den Schmuddelkindern (“Don’t Play With the Grubby Children,” 1965), but has released close to 50 albums, starting with Zwischen Null Uhr Null und Mitternacht (“Between 00:00 and Midnight,” 1963), renamed Rumpelstilzchen (“Rumpelstiltskin”); his most recent albums Krieg gegen den Krieg (“War against the War”) and Dämmerung (“twilight”) came out in 2003 and 2006. In 1968 Degenhardt was involved in trials of members of the German student movement, principally defending social democrats and communists. At the same time, he was – in his capacity as a singer-songwriter – one of the major voices of the 1968 student movement. On his 1977 album Wildledermantelmann he criticized many of his former comrades from that era for what he saw as their betrayal of socialist ideals and shift towards a social-liberal orientation. The album’s title (roughly, “man with velour coat”) mocks the style of clothing they had supposedly adopted.

Notably, the songs on Degenhardt’s 1986 album Junge Paare Auf Den Bänken (“Young Couples on the Benches”), along with the song Vorsicht Gorilla (“Beware of Gorilla”) on the 1985 album of the same name, are his translations into German of chansons by the French singer-songwriter Georges Brassens, spiritually perhaps one of his closest musical allies.

He was a cousin of the Catholic Archbishop of Paderborn, Johannes Joachim Degenhardt, who died in 2002. He is also the brother-in-law of the American-born illustrator Gertrude Degenhardt, who has designed many of his album covers for him. Degenhardt lived, till his death in 2011, in Quickborn, Kreis Pinneberg in Schleswig-Holstein.

Official site of Franz-Josef Degenhardt >>> (in German, with discography and most song lyrics)