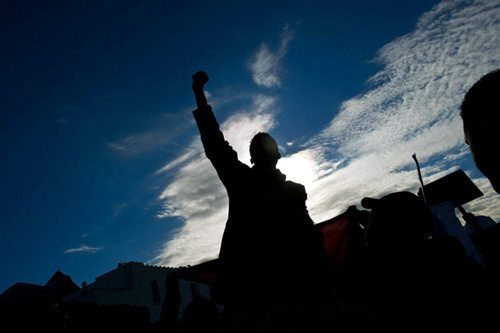 the fact remains
Mahmoud Bou’Azizi started it all
a poor man
who had his small rickety
Fruit stand shut down
and taken away
because he couldn’t pay
the $25 permit
(read bribe)
So the police came
Took away his livelihood
Told him to get lost
Pushed him away
Slapped him around when he wouldn’t go
Mahmoud Bou’azizi
in the same situation
as millions of young men throughout
the Arab world
without jobs, hope, or a future…..
He tried to fight back
Tried to go through ‘proper channels’
Tried to meet with the mayor
who refused to see him
So then he went outside the gates of city hall
Doused himself with gasoline
and lit a match

First in his native Tunisia
Leading to the downfall
of the despot Ben-Ali
Who had run the country like his own personal bank
With brutal security forces to keep it that way
Then it spiraled outward
spreading east to Egypt
and the overthrow of the western puppet Mubarak
then West to Libya and the 42 year old dictatorship
of Muammar Ghadafy
Soon the populations
of Bahrain, Yemen and Syria joined in

A lot of change
with that one lit match
One life given up
A fire that lit the way
Now everyone sees
that maybe
there really can be Change
That maybe, just maybe, everyday people
really can make a difference once in a while
At least they’re willing to try it now
in a dozen different countries

Maybe one man
can make a difference after all
Too bad he had to die to do it
Immolated
Immolate doesn’t necessarily mean burn
according to Webster’s dictionary,
It means to sacrifice in the first definition
though it adds as by fire in the second
Why should a man have to die
to effect change?
Well, thousands have
Just a quick look through the history books
will tell you that
You’ll see the names
burned into the pages….
Maybe change
is such a powerful force
That it demands sacrifice
human sacrifice
like the Aztec altars of old
Well, whatever it demanded
Young Mahmoud Bou ‘zizi
and thousands of others, less publicized
did whatever it took
in March 2011
throwing themselves
onto the sacrificial altar of change
Dying
to change their world.