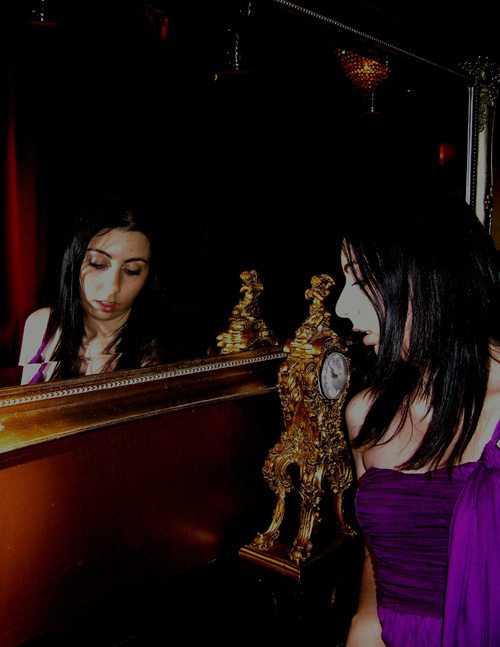 Koraly Dimitriadis is a Cypriot-Australian writer of poetry, prose and non-fiction. In mid 2009 she was selected to participate in the Overland masterclass for her short story ‘The recipe’ and since then has been a regular blogger for Overland. ‘The recipe’ was longlisted for the FISH short story competition in Ireland in 2011. Koraly’s poem ‘Daylesford’ received a merit award in 2011 in the Diasporic Literary competition. Koraly’s writing has been published online and in print, has been broadcast on the radio and television, and was displayed on Federation sqaure wall for the Overload poetry festival. She has performed her spoken word at places such as Passionate Tongues, The Human Rights Festival, The Emerging Writers’ Festival @ The Tote, The Dan O’connell Hotel, Perth Poetry Club and she has collaborated with prominent contrabassist Nick Tsiavos at La Mama Court House. She was a finalist at the Doris Ledbetter poetry cup and the Overload poetry slam in 2010. Koraly presents monthly on 3CR’s Spoken Word program where she selects a poet to interview and matches them up to one piece of music by an undiscovered local band. Her work has been published in Untitled, The Reader, Blue Dog, Paradise anthology, The Green Fuse, Positive Words, The Diamond and the Thief, Page 17, Southern Sun Aegean Light, Short and Twisted and at Mediterranean poets. Koraly’s first unpublished novel, Misplaced was longlisted for the 2010 Hachette manuscript program. Koraly studied the local Melbourne rock band Trial Kennedy, incorporating their music and band dynamics into Misplaced. Her first chap book, A poet is born, was published in January 2011 and Koraly is about to launch her next chap book, Love and Fuck poems. Koraly has also been working on her first poetry collection, Love according to wogs. Koraly is the literature curator for the Antithesis festival and studies at RMIT.

With the launch of my second poetry chapbook, Love and Fuck Poems, approaching, I thought it timely to write a post to hopefully generate some discussion about poetry and pornography, and the fine line between the two – or can they be the same thing? It’s a question that’s been dancing in my mind the last six months. Before that time the thought never crossed my mind to explore this kind of poetry. But then I was introduced to a poet named Ben John Smith, editor of Horror Sleaze Trash and suddenly my poetry world was expanded to new horizons.

Ben was featuring at Passionate Tongues Poetry readings at Brunswick Hotel the first time I was exposed to his poetry, and he invoked a strong response – people either loved or loathed him. Mention his name to some poets and they’ll reciprocate with a look of disgust. ‘His work isn’t literature!’ someone said to me, ‘he’s sexist, misogynistic – he’s a pornographer, that’s all he is.’ And I received more than a few complaints when I interviewed him on 3CR’s Spoken Word program a few weeks ago. I’m working with Ben to put together a show for my launch where we will be going head-to-head, poetry style, and I have to say, getting to know him as a person, he is a far stretch from the ‘sexist pig’ people label him to be. In fact, he has been in a loving relationship with his girlfriend for ten years, so what seems to be the problem here?

Growing up in the working-class suburb of Broadmeadows, Ben wrote poetry from a young age but was afraid to tell anyone. Today, at the age of twenty-seven, he has only just come out of the woodwork with his writing, producing three chapbooks (Drunk and the matinee, Double penetration and I fucking love you, bitch, launched at the Overload poetry festival) and one poetry collection (Horror, Sleaze and Trash) in the last year, all of them selling well. On 3CR radio he admitted to me that he felt the only way he could get away with writing poetry was to write about things his friends could relate to, or more precisely, in order to communicate with them, he had to speak their language. ‘I wanted to put something together where all my friends could enjoy it … it’s the lowbrow scene, it’s the tattoo scene … it’s all very related to nudity and sex, it’s kind of alternative … and I thought it was a good idea to put literature next to things like that where everyone could be exposed to art.’

The main concern, it seems, is that Ben is accused of treating women as sex objects in his writing and on his website, which, averages 300 hits a day but can sometimes get 4000 hits. On his website Ben features artists from around the world including poets, short story writers, graffiti and sketch artists, and photographers. A lot of the content is sexually explicit and some of the photos are of naked women. But Ben defended the claims against made against him on 3CR. ‘The women is always empowered, and often they contact me to be photographed – I am hosting the photographer, here, not the woman as an object.’

Ben may have not been fortunate enough to receive the education that many in our middle-class literary world seem to have, although he does read avidly, two books a week, from Dostoevsky to Chuck Palahniuk. But to me, there is real beauty in his poetry, an honesty and rawness that draws me in. His poetry challenges me, makes me feel uncomfortable at times, and has inspired me immensely, which is why we are doing this show together. I’m not sure if I would have had the idea to produce my chapbook, or to think it was even at all possible to write poetry like this, had I not been exposed to Ben’s poetry.

If we examine the literary landscape at present, it seems that sexually explicit literature is shunned away from, particularly in journals. This is one of the main reasons I decided to self publish my chapbook, because I can’t imagine any journal publishing my material, and that begs the question: is Australian literature too conservative? After all, words are words; why does literature have to be academic writing? Literature is art, and art should not be censored. Yet it seems, from the responses Ben receives from the literary world, they want him to be censored. If anything, Ben is a mirror to the world he grew up in. Art is a reflection of society, and in order to understand society, we should allow the art to be free to be viewed, questioned and appreciated.

Although Ben and I both share a love for words and sex poetry, my aims for my poetry and particularly my chapbook, stem from a different seed. Growing up in a sexually repressed culture, I was never encouraged to explore my sexuality and instead the focus was on finding a man to marry. Ten years later, having separated from my husband, it seems that I am now living the years I was denied by my culture – and it isn’t just me. Lately I’m hearing many stories of divorces and separations where the woman married young because she felt that it was expected of her to do so. Writing this poetry and producing this book has been one of the most liberating experiences in my writing career, and also, my personal growth. Esther Anatolitis, CEO of Melbourne Fringe who is also from a Greek background, had this to say after reading my chapbook: ‘Koraly writes in a voice that you need to hear. Her pride and passion is powerful, vulnerable, tentative, strong. The way she fucks with our sense of φιλότιμο – pride – will be chillingly resonant and painfully desirable to women from our community who have refused themselves a voice.’

But that wasn’t my only aim. I am tired of reading poetry about birds and trees, and although birds and trees are a huge part of the world we live in, so is sex, and this part of humanity shouldn’t be buried or ignored. Paul Kooperman, National Director of Australian Poetry had this to say: ‘Love and Fuck Poems is exactly what poetry should be – personal, passionate and bold. It goes to places many poets avoid, shining light on humanity’s dark side, allowing the reader the rare opportunity of feeling included in the experience through the clarity and honesty of the work.’

What Ben and I both agree on is that sex is something natural and part of our humanity; it’s something we should celebrate and not be embarrassed about. Ben also spoke to me on 3CR about the photographs he takes for the website. ‘All the shots I’ve ever done are never naked – and I think that’s very funny because the shots I do get 100, 200 likes on facebook but then the porno ones [taken by other professional photographers], we get 3000, 4000 hits, but two likes on facebook – it’s the whole I want to see it but I don’t want anyone to know, and I just think it’s something that should be embraced.’

And embracing is what we will both be doing for the launch of my new chapbook, Love and Fuck Poems:
8 pm, Thursday 30 June
Bar Nancy, 61 High Street Northcote

In the meantime, enjoy the poetry below.

Author’s note
WARNING: The poems below are sexually explicit. Please do not scroll down if you are easily offended. After reading Ben’s poem ‘Fantasy’ from his poetry collection Horror, Sleaze and Trash, I responded by writing my own poem called ‘Fantasy’. Ben and I will be responding to each other in this way on our evening at Bar Open, poem for poem. Hope to see you there.

I think my ultimate fantasy
Would be to dangle
My limp dick across a woman’s face.

Drop it slowly into her opening –
Red lipped mouth.

I’d keep it in there
While she toyed with her junk.

She would have green nail polish on,
And it would dance,
In her pink and purple
Play ground.

She would hum
And my dick would grow harder.

Moan
And my shaft would expand.

Like them dinosaur toys
That expand in a glass of water.

Filling up her jaws

Her teeth leaving imprints
On the foreskin.

Until, finally, she would
Be unable to maintain the load
And with a big

She would throw her head back,
In an arch of spit a
and bright glowing eyes.

While my dick bounced up and down
Like a great rubber gong. 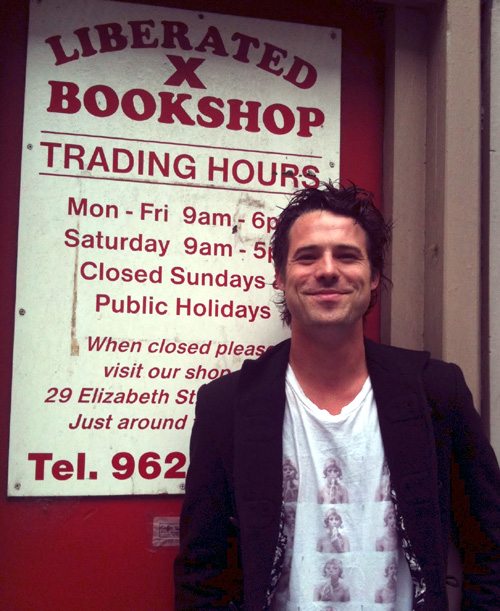