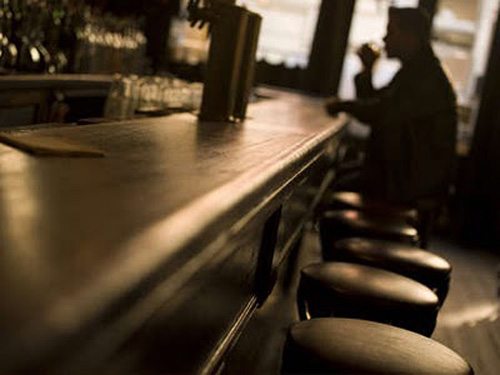 Busty Bartenders, Bluegrass, A Basque Woman and A Creepy Man in a Bar

He tells me
I’ve never had good luck at this place.
I sat in a favored seat,
by the front door,
listening to the eight man bluegrass band,
banjos to the left and washboard to the right.
Then this older man motioned with his index finger.
We talked about his t-shirt, from
the Very Little Theatre.
We talked about his book, in hand,
The $69 Tomato.
He asked why I was there,
this Tuesday night
(My friend told me about the bluegrass here and
I was apartment hunting in this city.)
He told me about his divorce in April, and
about a Basque woman he met who
liked to be tied.
He asked this of his close friend,
a single lady and platonic friend,
who did not like to be tied herself.
They met earlier for dinner.
Then he asked about my fantasies. No comment, to him.
That lady to your left is checking you out, he said.
I tried, started to say Not my type. Wrong gender.
Do you like those guys at the bench or
that one at the end of the bar?
Pick one.
One or more
would do you from various positions.
We only laugh.
He finishes his beer and
leaves me after leaving
his number.
I push
the paper aside
the lady bartender, at Sam Bond’s Bar, with a large tribal tat
in her cleavage tosses the paper and
then I leave back to my room
at the hostel.

Nicole currently has many hopeful projects, a variety of styles and a wide variety of subjects. She has many hopeful projects and no MFA’s. She has been accepted at 4 and 20 Journal – a short nature poem, A Handful of Stones – another short nature poem, A Word With you Press – Cafe Poems, Abraham Lincoln Magazine, Asphodel Madness, Boneshaker: A Bicycling Almanac – three bicycling and nature poems, Camel Saloon, Elephant Journal, Hyperlexia Journal – Oregon and of autistic friends, Just Another Art Movement – New Zealand, Ken Again, Kerouacs Dog, Nefarious Ballerina, Oregon Vagabond – Eugene street newspaper of/ for the homeless, Outward Link – three peaceful social poems, Pemmican Journal, Pigeon Bike, Portland Alliance, Queen Bee Collective – a new nature poetry blog of Eugene, Red Fez – Canada, The Scrambler, Sketchbook and other journals online and in print. Nicole Taylor has been published and winning locally in Oregon. This year Nicole has hiked many Oregon trails: Beazall Forest Trails, Mt. Pisgah, Siltcoos Lake Trails, Skinner’s Butte, Spencer’s Butte and Tryon Creek State Trails. She is an artist, a hiker, a volunteer, and a dancer, formerly in DanceAbility with physically disabled friends but Nicole is not physically disabled. She blogs at www.apoetessanthology.blogspot.com

0 Replies to “nicole taylor | busty bartenders, bluegrass, a basque woman and a creepy man in a bar”