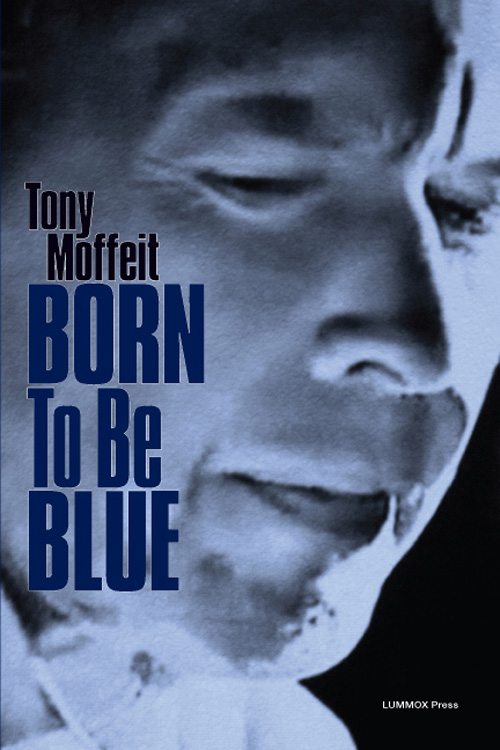 Born To Be Blue

I’ve known Tony Moffeit since the early 1980’s, in Denver, when we’d run across one another at readings or other gatherings. We were both finding our way as writers at the time, and I, for one, had a young voice that was rough, raw, trying to get at real. We were trying to separate the truth from the chaff. One of the first times I heard him up close was at some third floor converted minimalist red brick Kerouac-esque warehouse space in downtown Denver, a new loft-type affair, suitable for performance. I was with Ed Ward; we were both wondering who this cat was, dressed in shiny leather, banging on the bongos like some incantatory, skinny white shadow. He had his voice down and it was a good sound. He believed what he was doing and we believed him when he did. While the rest of us were learning to emote cool, Tony was blowing, scatting, chanting, rhyming hot. It was coming from some vast subterranean spirit place where the blues get form and climb up the burning urgency of the voice straight up to the street. I quickly got the Pentecostal suggestion of his rhythms: this man could sing. He conjured Ray Charles, he conjured Mick Jagger…but with poetry! You could hear traces of San Francisco street poet/singer Jack Micheline, or Kell Robertson, traces of Jack Kerouac’s Mexico City Blues…. FROM THE INTRODUCTION by John Macker.

poetry is blues poetry, jazz poetry, Southwest poetry, and outlaw poetry. His book POETRY IS DANGEROUS, THE POET IS AN OUTLAW, from Floating Island Publications in 1995, contains outlaw poems and essays. His outlaw poetry and essays continue on two online websites: Metropolis: Outlaw Poetry and Free Jazz Network and St. Vitus Press and Poetry Review. His book PUEBLO BLUES was the winner of the Jack Kerouac Award from Cherry Valley Editions in 1986. Two other Cherry Valley Editions publications are LUMINOUS ANIMAL and NEON PEPPERS. He was the recipient of an NEA creative writing fellowship in 1992.

In 2004 Moffeit, along with Todd Moore, founded the Outlaw Poetry Movement. He is also a blues singer and songwriter and his blues music is featured on the 2008 CD, OUTLAW BLUES REVOLUTION, from DigiVintage Records. He is the author of over twenty-five books and chapbooks, many of them featuring poems with the characters Hank Williams and Billy the Kid. In 1997, he was the recipient of the Denver Press Club’s first annual Thomas Hornsby Ferril Poetry Prize. Moffeit has two websites: tonymoffeit.com and tonymoffeit.outlawpoetry.com

from colorado springs to pueblo my writing pad on

from: Born To Be Blue by Tony Moffeit