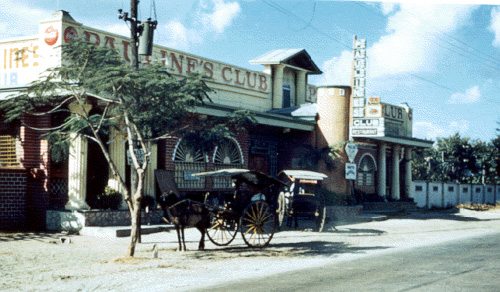 Radio blaring, carnival-painted jitneys running from one war to another, took almost everybody someplace. One of them nearly clipped Brad Davies, then careened wildly into thick traffic.

An eighth of a mile behind him, the yellow river ran quietly among the reeds around the lower end of town and under the concrete bridge, where white-slacked girls, winked and begged from san pans and little brothers dove for centavos, pennies, quarters, anything thrown by sailors crossing from base to town and back, while the Shore Patrol waited town side with the local police, who’d just as soon throw a street whore in the river (put them out of commission, cheaper than arrest). The river inched past more san pans tied to shores of shacks roofed to impossible poverty. In dim lit rooms with wall-stricken crucifixes, back town hammocks swung gently, or not at all. Where mothers of mother’s daughters turning tricks, held the Again Children breathing softly just before the sky dropped streaks of pink. Where the face of a pig appeared, then disappeared, after seeming to stand dumbly forever, watching the river flow out to who-knows-where the sea started.

No matter how far into the belly of town he walked, Brad Davies couldn’t shake the smell of the river.

The If-You-Want-It-Ask, City Of Olongopo blinked neon in any crevice capable of holding a sign. White hats bobbed everywhere, earrings jingled, kids stole and sold everything. Capped teeth flashed. Pesos flipped. The dull thunk of green San Miguel beer plunked in front of him and the never- final change slapped the table, as Davies leaned back in the chair, to help the night go mad.

Up front, a young Filipino stepped on stage, pulled the brushes from his green spangled drums and drew them easily over the snare while the rest of the band hunched over cigarettes and blew smooth smoke around the cool chicks leaning, or about to lean on their shoulders.

Davies ordered more beer. Oweee bam boom. Tables full of chicks in laps and baby chicks pecking ashtrays, beer bottles, cellophane, ashes. Cocked back white hats, more chicks. Suzy wore long black hair flowing to her thighs and some of it got hung up when she sat on Davie’s lap and threw her arms around him.

“You like Ocean’s Eleven?” she said. “Shanghai Club, Zanzibar, maybe Hillbilly Corner? What you like?” She whispered in his ear and sat back, clasping the back of his neck. “Handsome, so handsome. You want drink?”

Told her he had one coming. Ordered one for her. She glanced over at her friends and cut her smile an inch. But her smile whipped right back with her drink and talking and singing and clapping with the now thrashing band and the beer sweat poured while they all danced, fell in love, lied, and felt in their pockets for more money and sometimes came across a wedding ring tossed in with the change.

Chicks stood under the table, on the table. Chicks perched on glasses with frightened, spindly feet. A Third Class Sonarman told his chick about a great battle that didn’t happen. One lance corporal tried to down his beer without losing the chick perched on his head. And how about eating this chick, or that chick right on the table? But just about the time it seemed like Davies’ chick, Suzy was a likely candidate, a balloon man stuck a wide mouth of gold teeth between the outcome.

Why everybody bought all kinds of wonderful blue, yellow, red, balloons and white ones with blue ones inside and for what seemed like three long minutes, everybody sat still, looking at one another stupidly, while the balloons rose from their stringed fingers.

More BEER! The band played Dixie, The Marine Hymn, Anchors Away, We Gotta Get Outta This Place, Sock It to Me Baby then somebody stuffed a baby chick in one of the girl’s drinks. Frowns, then howling laughter when embarrassment faded, then all the guys were stuffing baby chicks in drinks and snapping their little necks. Got so loud you couldn’t hear the cheeps and before long, all the baby chicks were dead, dying, soaked or tied to lingering balloons released and flying high above them, bouncing here, there, against each other on the ceiling, dumbly turning round and round the strings around their necks. That band just let it rip until the room was so loud the Shore patrol came up to have a look.

Packed house. Fucked-up drunken sailors and bug-eyed Marines danced and stumbled among chairs and the dead chicks danced slowly on the smoky ceiling until it was time to take a chick to a hotel, find a chick to strap before midnight, or something. Eyes glazed in the last beers for the road, sloshed to bellies, to urinals and out to the still-thick heat of Olongopo City, to be forgotten in lead-sleep and hangovers, perfumed hair and cool, thin sheets….

As Davies was about to leave, a man carrying a broom with a nail in the handle walked around the room and popped all the balloons, bringing the dead baby chicks swiftly to the floor, to be quietly swept into a pile and stuck out back. 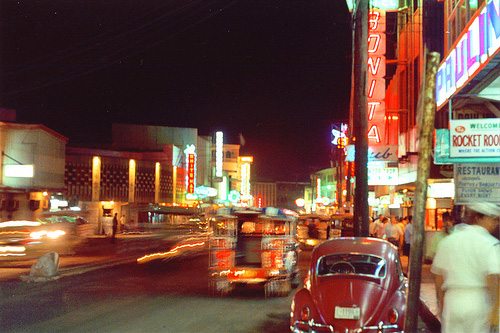