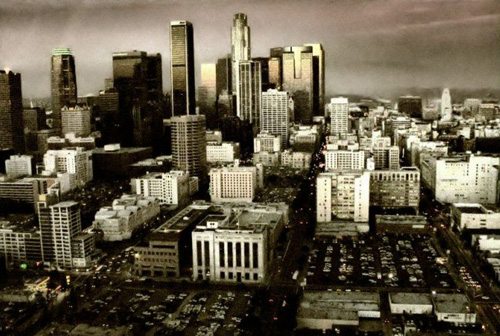 She was hardly
recognizable sitting on
my steps
waiting
for me to come home.
It was 5 a.m. on a
Tuesday morning.
I was drinking at a bar on
Hollywood Boulevard
near Normandy, till closing time.
And then walked down
the street to Norm’s
restaurant for some steak
and eggs, sitting there downing
four black coffees, taking it slow
till I sobered up a little.
As I walked up my walk I could see
her sitting there
with her arms cradling her knees.
Her left eye was beaten shut;
blood caked on all over
her beautiful face,
and her upper lip
busted and swollen.
She was smiling under
my porch light. I got close
into her face.
“Jesus Christ, Dee, what
the fuck do you have
to smile about? What happened?” She started to cry.
“That’s two question and I can’t
answer either one right now.” Tears
falling down her cheeks.
I stepped around her,
unlocked my door and pushed it open.
Then I bent down and gently
pulled her up by the shoulders, turned her
around and walked her
into my court apartment.
I turned on the light,
and still holding her shoulders,
guided her to the bathroom,
and sat her down on the edge of the bath tub.
I dampened a wash cloth
with warm water
and gingerly cleaned her face
as best I could. She was trembling
and sobbing, with halting intakes
of breath, her whole body shaking.
Dee had been on the
streets hustling for about six months.
I meet her about a year before,
when she was go-go dancer
at a place on lower Melrose.
She lost her job after slapping a
customer for reaching up
and pinching her tit.
Not being able to find a job dancing,
or anything else, for
that matter, and desperate for money, she
decided to sell her body …
on the streets of downtown L.A.
She stayed with me for awhile, and she
started to mean a lot to me.
I attempted to talk
her out of it many times, but to no avail.
Finding a half-way decent pimp
was the toughest part; she interviewed
them, a couple a week for a month,
like she was hiring a
trustworthy baby sitter, or a Japanese
gardener. She found one named, Omar,
who set her up at the Roselyn Hotel
on 5th street. In a few months she had
enough money for
a nice little bungalow in Silverlake for her off
hours and
was saving money
for her dream of movie stardom; taking
acting lessons on the side.
She stopped by only two or three times
after that, seemingly content
with her life on the streets,
and with Omar.
I was on my knees holding her,
as she sat on the tub crying,
the tears soaking my shirt
clear through to my skin.
After awhile I got her up
and walked her into my bedroom,
undressed her down to her panties
and bra.
She had stopped crying and
was thanking me over and over again
for “being here”. She quietly, slowly begun
to tell me what had happened.
Omar had brought up a trick
to her room at the Roselyn.
The trick was drunk and couldn’t keep
a hard on. He suddenly got
violent and hit her, then pulled a
knife, pressing it to her
throat, screaming foulness into her face,
as he still held the knife
at her throat, beating her with his fist.
She managed to knee him
in the balls and get away, running
down two flights of stairs
and out of the hotel. Her first thought
was to find Omar, who always
hung out at Googies restaurant
down the street.
When she couldn’t find him,
it was then she realized she left her
purse in the hotel room,
with all her money and the keys
to her bungalow. She hitched a ride into
East Hollywood, and had been waiting for
me since 11 p.m.
She said she was afraid to go
back to the hotel room without someone
with her.
I told her to lay down and try to get some
sleep, and that I would
go with her later that day.
I pulled the covers back and she got
under them like
a small child being tugged in,
still shaking a bit . She asked me to lay down
with her and hold her like I used to.
And I held her till we both fell
asleep. We got up around noon, showered;
I fixed some scrambled eggs, coffee and toast.
Her face looked worse,
especially her eye, which had swollen even
more, and was as black as coal.
I made her an ice pack
and told her to hold it on
the eye until her face was
numb; gave her some codeine
for the pain; and we set
out for downtown.

After parking in a lot off of 5th & Broadway
we walked to
the hotel. The door to her room was
wide open, but amazingly
nothing appeared to be missing;
she found her purse and
everything was there. She started
crying again out of
nowhere; I thought that that
was all over, but apparently not.
She sat down on the bed and cried harder
than the night before, nearly
hysterical. I started to move over to console
her,when I heard a noise behind me
and turned to face
a little black guy in a rumpled shark skin suit.
I knew immediately it was
Omar, from Dee’s description.
“Who the fuck are you?” he asked,trying to sound
as menacing as possible.
I started smiling, because he was such a weird
looking little guy. He had a lazy eye,
which appeared to be slightly spinning,
a huge nose, and a chin
disappearing into a chicken neck.
Before I could say anything. Dee jumped up
from the bed and ran over to him.
“This is my friend, Doog, that I told you
so much about. Doug, this is Omar.”
She was smiling like she was introducing me
to her father at a family picnic
Omar looked me up and down like I was a bug,
and then smiled a real smile, sticking out
a small thin hand. My smile hadn’t left my face, and I
said. “Nice to meet ‘ya,” shaking his limp hand.
Dee begun to unfold the story
of the night before. Omar listening attentively,
sat down on the bed to roll a joint.
I closed the door and went into the bathroom
to piss. When I came back out, Dee was crying
again and Omar was holding her
and smoking. He offered me the joint, but I declined.
He didn’t seem to like that much,
but when I explained
I was driving back
to East Hollywood and smoking
messed up my depth perception, he smiled,
and said he’d roll me one for later..
He rolled up and huge bomber and handed
it to me.. Dee was either smiling or crying
through it all, thanking me as she
held on tightly
to her pimp. Omar shook my hand again.
I gave Dee a hug and left.
On my way home I thought of several things
I should’ve done or said, like talk
her out of whoring, slap Omar senseless
and throw his ass out the window, things like that.
But she seemed happy, like I said; and
she could’ve done a lot
worse than Omar. And who was I
to come between a whore
and her pimp?