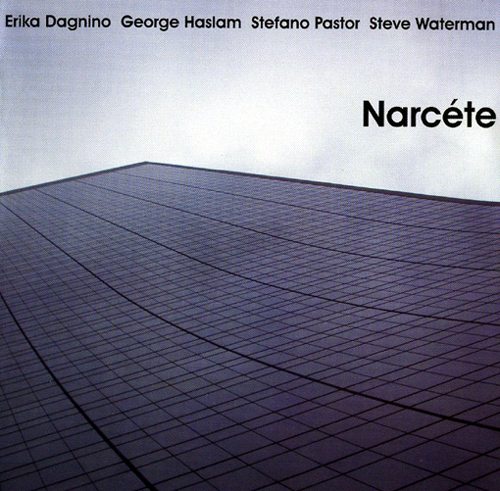 Slam Productions is glad to present the poetry music work of the Anglo- Italian quartet: the very talented Italian poet Erika Dagnino with her ‘beautiful, strong and clear voice’ (as Peter Brötzmann, among others, said), the Italian violinist Stefano Pastor, winner at Top Jazz 2010 and 2011, the English musicians George Haslam and Steve Waterman, two of the top British jazz players both at home and on the international scene.

Narcéte represents the natural connection between poetry and music, two very close arts that express themselves with sound, rhythm and consonance. A work in which expression and speaking about expression cross each other: the art, in its making, declaredly talks about itself.

A work in which, as the critic and journalist Gennaro Fucile says in the liner notes: ‘None of the two elements here finds itself subjected to the other, and this is the key to this work, a happy junction of different voices where instrumental improvisations and words stand respectful of each other’, where ‘Each of the four artists contributed evenly to the final outcome; in a careful succession of sounds, words and silence.’ — George Haslam

The quartet we are about to hear

presents us with the most unusual of outfits — unusual not so much in its aim to link poetry with jazz music (or vice-versa, if you wish), hardly anything new, as for the peculiar path it takes in reaching such goal: namely, a gradual and thoughtful testing process of the project through different «live» situations. Give credit for it to the friendship and mutual regard among the artists. Haslam and Waterman go back a long time, same as Pastor and Dagnino; plus, this was not the first time Haslam and Pastor, Dagnino and Haslam have worked together. Credit is also due to a shared interest in «music and poetry», following a tradition of long standing in both Italy and Great Britain.

Right from the start, this record gives a whiff of concept album, a format which harks back to the Sixties/Seventies and records such as Tommy, The Who’s «rock opera». Indeed, what we have here is a collection of Erika Dagnino’s poems, read by the poet herself. The spoken word acts as a narrative thread for the musicians, who are called up to ornate and introduce the text, and at the same time to dissimulate, conceal and contradict it, all to the purpose of creating a single lyrical flow.

Upon a first listening, the record may sound like a further episode in the long but sporadic relationship between poetry and music, jazz in particular; what with being there a text, a poet and a group of musicians who, for all their contemporary eclecticism, come from genuine jazz stock. To put it differently, this is an instance of «Jazz & Poetry», that source of joy and torment for both poetry- and jazz-lovers, means of expression which, like a comet, runs an orbit of its own, spinning now and again around planet jazz. Sometimes the distance between the two bodies can be quite sizable: just think of Ken Nordine’s word jazz; at other times, the two orbits brush, as it was the case with the Beatniks in the Fifties (e.g., with jack Kerouac’s bop prosody) or with the «black pride» still worded today by Amiri Baraka.

Things are not exactly what they look like, though. Erika Dagnino’s text has a life and a music of its own; likewise, the music woven by Haslam, Pastor and Waterman has no need of anything more: it springs out, it comes and goes, now feverish, now quiet, dancing to the rhythm of the blues.

None of the two elements here finds itself subjected to the other, and this is the key to this work, a happy junction of different voices where instrumental improvisations and words stand respectful of each other. Each of the four artists contributed evenly to the final outcome; in a careful succession of sounds, words and silence. — Gennaro Fucile