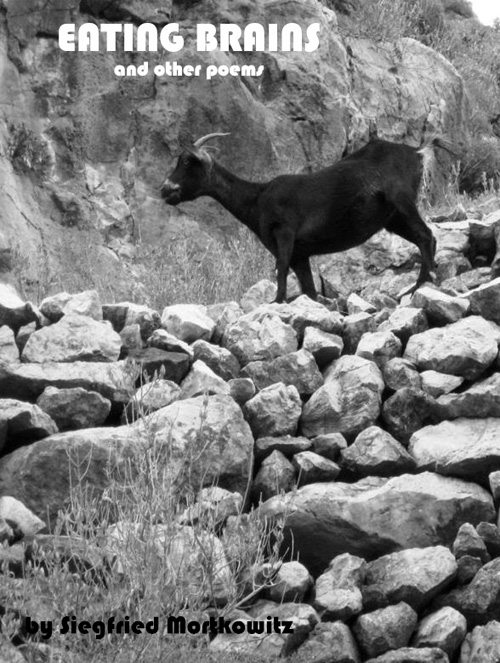 Eating Brains and Other Poems

by Siegfried Mortkowitz
Published by AFTER HOURS PRESS

What do you do when you’re the guest of honor at a party, and your jovial Greek hosts present you with the head of a roasted goat as a token of their esteem? If you’re poet Siegfried Mortkowitz, you catalogue the taste and texture of each bite, wash it down with strong ouzo, and the next morning wake up to the braying of a beast you now call “my brother.”

So many of the poems in “Eating Brains” are like that – antipathy and sympathy rolling around together. A stranger observed pissing in a phone booth somehow becomes a source of comfort. A noisy neighbor’s carryings-on at 3 in the morning merit a pounding on the wall, followed by a rueful meditation on her bad luck with men. More significantly, a deep resentment of his dead father doesn’t prevent him from pinning a picture of the old man in his striped Auschwitz suit over the crib of his newborn son, in recognition of a bond that cannot be broken by “that bastard Time and His assassins.”

Finding the grace in every-day grit is only half the thrill of reading “Eating Brains.” The other half is Mortkowitz’s witty imagination and jazzy language. Paris before sunrise is as “greasy and stale as a cheap cafeteria meal.” A series of poems are riffs on Films Noir. When his son is born, he and his wife eagerly look for reflections of themselves in the baby until “he becomes a house of mirrors.”

Blunt truths? Contradictions? Mortkowitz points out dozens — yet they all seem to float into place as gently as a blanket of snow. Readers, however, should not be fooled by the smooth surface. In his opening poem, “The Facts” Mortkowitz warns that things are not always what they seem. After defending himself against a series of vague accusations, he ends by stating,

There is no going back, no Delete All button
To undo our blundered lives. We are sealed
In our trajectories like monkeys orbiting the earth
In man-made satellites. That, too, is a fact.
But it is also true.

Waking up each day into the everyday,
what a wonder! No questions asked!
The sun rises, the toast jumps,
skywriters scrawl the headlines
across the moving overhead screen.
Earthquakes! Serial killings! Disease!
There’s too much information,
too many sharp edges, too much
of everything to enjoy your eggs and coffee.
But the anchorman insists that it’s still swell
to be alive. So you slide out of bed into the pool
of luminous toxic matter that is the universe,
breathing deeply, as the Yoga book says you should,
although you know that every breath you take
takes you closer to death. And you obey.
You obey and remain optimistic, it’s your nature
to see the glass half full even when it’s empty.
But to be on the safe side, you tread lightly,
feeling for the trapdoor with your bare feet,
trusting your senses and the silence
of our benevolent cousins, the atoms,
even as you shield your eyes
from the glow of the bright poison
in which you swim like a guppy.

Meditation before a Storm

What a neural delight, a dog barking
in the mossy prestorm silence,
a sound as welcome as a foghorn
to a swimmer without map or sky
to guide her through the rolling breakers.
The distant thunder was as ominous
as a creaking door in that film
about the ravishing young blonde
asleep in a haunted castle.
Although her bodice is discreetly torn
(just a hint of heaving cleavage, a soupcon
of creamy breast), she survives,
hymen intact and loved by a prince.
Nature and the movies render us innocent,
do what we will – innocent here meaning mortal,
of course. But there is too much innocence,
and always more going around.
Isn’t there a war somewhere to fill the sky
with the thunder of warplanes?
Yes, you say, where are the wars
when you really need them?
Although there must be some war somewhere,
perhaps more than one, even as we speak.
Someone counts them off: Libya, Afghanistan,
Nabboo, and all those petty conflicts in Africa.
Are they, strictly speaking, wars?
And what about the Mideast?

After the party we walked to the park
and threw stones into the pond.
There was no light, no stars to help us see.
The dull explosions in the water
were all we knew of the world.
Now and then, the sky was illuminated
by flashes of light that could be anything.
We are in the dark, damn it.
How much of life we miss
strapped into the silky coccoon
of our assumptions like passengers
on a night flight to China.
I wish I could know everything, don’t you?
Is that a dog growling or rolling thunder?
Is that rain or are we weeping?
If only the storm would break
so we could finally have some peace. 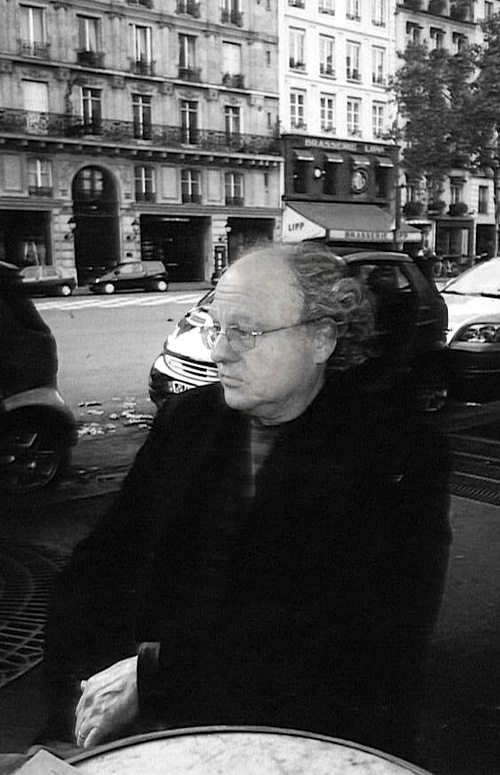 was born in Germany, lived in New York and Paris, and currently makes his home in Prague. He loves red wine, the music of Thelonious Monk, and being a father.