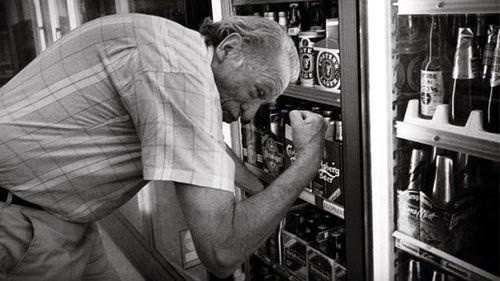 I’ve often wondered what Bukowski
would have thought of a place like Earl’s South
in Regina, which rhymes with vagina –
Mick Jagger was quite taken with this in 2006
when the Rolling Stones played two concerts
in the city with a name that rhymes with vagina
and maybe Bukowski, had he known about it,
would have been similarly amused …

Anyway, the bar in Earl’s South in Regina
is in the middle of the lounge
and patrons can sit on either side of it,
with the bartenders very much in the middle
of the scene, if you know what I mean …
It’s probably not the type of place
Bukowski would have liked to patronize
but this doesn’t stop me from asking myself
what he would have thought of Jenna,
just to name one of the young women
who pours my pints of beer from the taps,
which are also very much in the middle of things …

Bukowski’s well-known to many as a “leg man”
and, soooo, he might not have been distracted
by Jenna, since the bartenders at Earl’s South
in Regina, which we now know rhymes with vagina,
get to wear pants, so her legs are rarely on display …
However, I sometimes imagine Bukowski maybe enjoying
Jenna’s glances into his eyes every time
she served him another pint of beer
that she had poured just for him – and, by the way,
I tell myself that I would have persuaded him
to try one of the beers on tap at Earl`s South
in Regina, which he would have known rhymes with vagina …

Maybe he did not experience this sort of thing
at the bars he patronized in Los Angeles but
I don`t know this since, as I’ve said, I didn’t know the man
and, for me, drinking beer with Bukowski
means something entirely different
than what it would have meant for those
who actually had the chance to do it …

I’ll settle for reading his poetry and his prose
at Earl`s South in Regina and I’ll settle for enjoying,
partly on his behalf, if I can put it this way, Jenna`s glances
into my eyes every time she serves another
pint of beer to the older guy at the bar
who`s often enough reading something
by someone named Charles Bukowski …