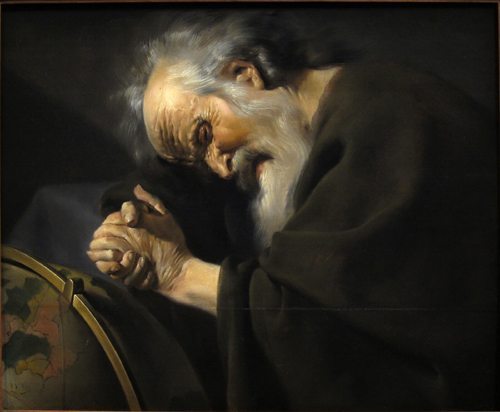 Heraclitus by Johannes Moreelse. The image depicts him as “the weeping philosopher” wringing his hands over the world, and as “the obscure” dressed in dark clothing—both traditional motifs.

Not the same woman twice …

Heraclitus said something once
about not being able to step
into the same river twice …
The truth is one cannot step
into the same bar twice,
even if you’ve just been out
for just a few minutes,
maybe having a smoke, if
that’s the sort of thing you do –
various nuances will have changed, even
if you’re not up to noticing them …
Another truth is that you cannot look
at the same woman twice, not even
if she didn’t notice your first glance at her –
a woman’s life flows, like the river
Heraclitus mentioned so very long ago,
sometimes quite quietly, possibly
without anyone really noticing,
sometimes with a stronger current,
that someone will see and wonder about,
sometimes there’s a swirling eddy
in her life, although she might be hiding it …
No, you can’t look at the same woman twice,
even if she didn’t see your first glance at her …
Heraclitus would similarly say
you aren’t the same person either,
changing ever so slightly between
each and every look in her direction,
and you wouldn’t want to get into
a philosophical argument with
a dead philosopher about this sort of thing –
not while you’re at your favourite bar,
ever-changing as it is, hoping
that a certain ever-changing woman
will stop ignoring you …