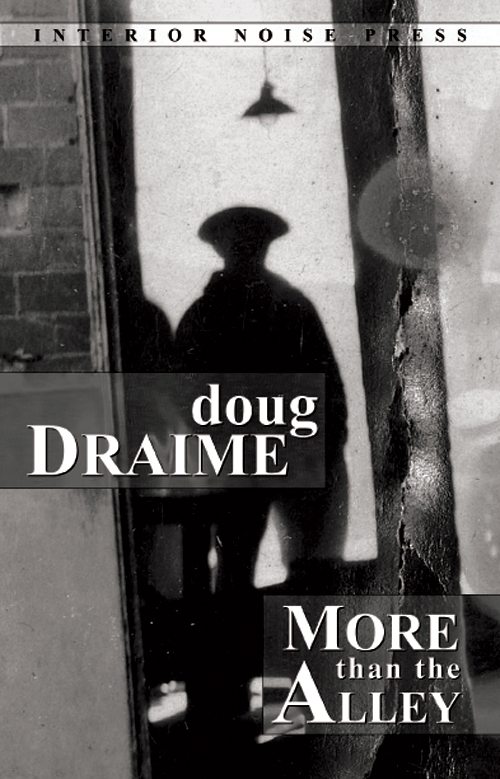 Ah, Doug Draime. What to say about the man? He is a gem of the small press and his poems are bursts of fresh air among too many other gulps of same ol’, same ol’. This book—this beautiful, robust, necessary book—will not disappoint even the toughest of small press critics … a category I generally find myself gracing. So take it from a source who’s been around the indie press block a few times: Draime’s the real deal.

Interior Noise Press puts a lot of work and passion into their creations, and this collection is no exception. Cover to cover, it’s laid out beautifully, meticulously edited, and bound in sturdy trade paperback. Worth every cent for the words, of course, but definitely just for the packaging and (insane!) quantity of poems alone, if nothing else convinces you.

Mr. Draime weaves tales of bygone days with the best of ’em, from rock ‘n’ roll jukebox bars to back alleyways to memories of ’Nam, in poems that read almost as prose, short vignettes and stories broken into lines as sporadically as the man appears to be broken himself. He is the master of real, dingy, gory tales of life’s darkness and vivid, harrowing images, from men in factories sliced to death by sheet glass, to hookers and wasted women he simply cannot save from themselves,

Her 5-year-old daughter
came out from
the back bedroom
and stood behind
her mother
in the doorway
wide-eyed,
terrified from all our
yelling
[ … ]

I [ … ] touched her on the arm,
telling her
I wouldn’t leave
till her mother felt
better in the morning.
She just pulled away from me gently, smiling,
and said it was OK,
that the other
men had just left her sleeping on
the couch, or sometimes the floor.
[ … ] (From On a Dark Night Across from the Hollywood Cemetery)

Draime doesn’t mince words or cower behind pretty flowers and puffs of silly steam. This is not poetry for the faint of heart and not a man you want to give a hug, although he probably needs one. These are the words of a man who has lived hard and fast, has had run-ins with cops,

That’s when I had to re-learn
that you don’t joke
with the cops. [ … ] (From Routine Stop)

[ … ]
I told him I had just kicked
the ass of Jerry from over
on 13th Street. He laughed
and said it was
about time someone
cleaned that bastard’s plow.
[ … ] (From Jerry from 13th Street)

booze, and drugs of the unfrilly kind. He gives easy and experienced voice to the wasted and tormented lives of society’s underbelly: the drunks, the dirty cops, the corrupt politicians, the suicidal, the disillusioned, the dead-eyed,

[ … ]
I was watching the
dead eyes of
the waitress, arguing
with the dead eyes
of the cook.
[ … ] (From The First Hooker (or Dead Eyes in Chicago)

revealing a large, imbedded
nasty looking gash
in the middle of his back
clear down to
the cheeks of his fat ass.
[ … ] (From Red’s Tavern)

and he makes no apologies for knowing their pain well enough to comment on it. He’s clearly been there … more than once.

I say with no criticism but with earnest truth that this is not a lighthearted read, not an enjoyable patio selection with the book club. Some of the scenes are downright hard to stomach and will make even the most galvanized of men grimace. The poems are best served with a side of rocks and the knowledge that the journey you are about to take through the pages will not be flowery, but will be lasting and necessary.

I leave you with my selected favorite lines from the book. If they grab you, well … you know what to do—support the small press:

[ … ] Memory
replaces everything lost
in memory. [ … ] (From Into the Bleak Abyss of Night)