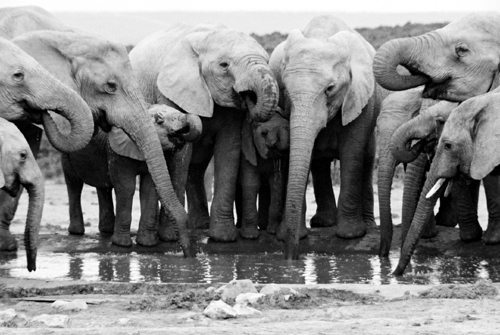 I woke up this morning and a worm fell out of my ear. I rolled over on my other side and a tiny beetle fell out of the other ear. The alarm hadn’t gone off yet, and it was still dark out. I got up.

I walked naked into the kitchen and flicked on the overhead light. I noticed my stomach was covered with tiny red spots and my toenails had grown long and black and curved down so that they scratched against the linoleum as I crossed the floor. I washed down three aspirin with a tepid glass of tap water and went back to bed. But I couldn’t get back to sleep because of the ticking clock.

Wait a minute. The clock is digital. I went up on one elbow and stared at the glowing red numbers, watched a four turn over into a five. The ticking stopped. But the moment I lay back down, it started again. I pulled the pillow over my head and soon I was dreaming.

There were elephants in my dream, marching thru a corn field in Kansas. Then a swarm of locust blackened the sky and swooped down over the corn. The elephants began to trumpet. They raised their trunks in the air and sucked up the locust as they descended, then shat them out in the form of tiny rodents that began nibbling at the corn. Big game hunters materialized and blasted away with their elephant guns. The elephants stampeded thru the corn.

I woke with a start. The alarm began beeping, my cell phone started ringing, and the TV came on with the morning news.

Wait a minute. I don’t have a TV. I got out of bed and shut it off anyway.

First light was in the sky, and I noticed that the red spots on my stomach had turned phosphorescent green.

I lay back down on the bed and closed my eyes. I knew I should get up and take a bath, but I was afraid of what would come out of the faucet when I turned on the water.