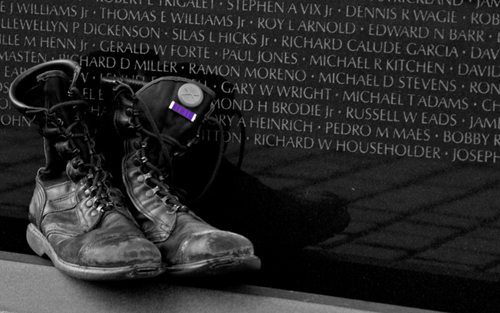 Lately I’ve been remembering the day my parents brought me to Disabled Veterans’ Day at the old Shea Stadium, home of the then-new New York Mets. It happened by coincidence. On the spur of the moment my Dad thought maybe we should go to a ballgame, and we agreed. We lived nearby. We didn’t know it was on the same day disabled veterans from all over the city were invited to the ballgame and admitted for free.

At first, we didn’t notice. I remember the usual ballgame day excitement, how I gasped when I saw the gigantic ballpark and heard the loud buzz of the crowd. I stared in wonder at vast expanse of the outfield (those guys cover all that ground?). I remember the smells of the peanuts and the hotdogs, and that smell beer makes when it hits hot cement. Somehow the sky seemed bluer, the sun seemed brighter, everything just seemed to be generally better on this beautiful day at the ballpark….

Then the Mets took the field, and everybody yelled and screamed, especially me, strongly encouraged by my Dad. He got a kick out of watching me, plus he was a believer in the let-them-get-it-all out while they can theory.

Everything went like it would during a normal ballgame, until we went to the concession stand for hot dogs and a beer for the old man. Somehow I got separated from my parents. I remember I didn’t get scared, though. Quite the contrary. I viewed it as an opportunity to explore a great big ballpark.

I discovered more that I wanted to. At first it was gradual, subtle. A guy with an empty summer shirt sleeve walked past on my left. Then another passed by on the right, walking on crutches, with an empty pant leg folded up and pinned together. More and more of these guys walked or crutched by, empty sleeves flapping, empty pants legs hanging. (This was in the days before state of the art prosthetics, like today). Then a woman pushed a guy in a wheelchair past—with no legs, just a pair of stumps sticking out of summer shorts. Whoa—what happened to these guys?

I tried to look for my parents. But the more I wandered into the crowd, the more I was engulfed by men that were missing arms, legs, both arms, both legs—and faces—guys with missing faces! They wore baseball caps, dark sunglasses, and below that, big sheets of tan cloth that hung like curtains. They looked like giant Band-Aids, covering up the big missing space where the lower face should have been.

There seemed to be more and more of these guys coming from every direction.

I remember thinking I should turn around and walk away fast. But somehow I couldn’t.

I was shocked, scared and curious at the same time. I had never seen people like this before. I was only six or seven years old. So I stood there gaping at them.

After a few minutes my parents re-appeared , from where I don’t remember. This was many years ago. They looked at the men with the missing pieces, then at each other, then down at me.

My Mom grabbed my arm and told me not to stare at these guys. I asked real loud what happened to them.
My Dad hushed me, told me to lower my voice. When we got to our seats, I asked him again in a lower voice.
They were in the war,” He replied in a voice just as low. “They’re wounded.”

“See that?” My Mom leaned forward from her seat. “It’s not like on TV.” She was alluding to Combat, The Gallant Men, and other WWII TV shows I liked to watch in those days.

“Let’s just watch the game,” My Dad said. And we tried to re-direct our attention to it, tried to focus on the moving figures on the field, lose ourselves in the stadium crowd. But I just sat there shocked, the after-images of what I had just seen repeating over and over in my mind’s eye….

What really gets me about this memory is that this was before Vietnam got going full blast, before Gulf Wars I and II, and Afghanistan. How many more guys have ended up like this since then?

I thought I had forgotten about all this stuff long ago. I don’t know what brought it back. But now I never want to forget it.