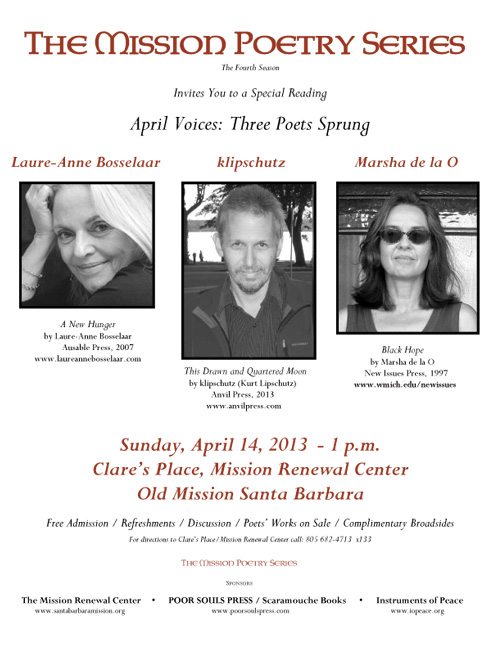 SANTA BARBARA, Calif. April 5, 2013 – The fourth season of the Mission Poetry Series continues on Sunday, April 14, at 1 p.m. at Mission Santa Barbara, with “April Voices: Three Poets Sprung,” featuring Laure-Anne Bosselaar, klipschutz (Kurt Lipschutz) and Marsha de la O. The reading will be held in Clare’s Place, a library and conference room at the Mission Renewal Center on the grounds of the Old Mission. The event is free and open to the public.

Laure-Anne Bosselaar is the author of The Hour Between Dog and Wolf, and of Small Gods of Grief which was awarded the Isabella Gardner Prize for Poetry for 2001. Her third poetry collection, A New Hunger, was selected as an ALA Notable Book in 2008. A Pushcart Prize winner, her poems have appeared in numerous anthologies and journals, including Ploughshares, AGNI and Harvard Review. Fluent in four languages, she is currently translating American poetry into French and Flemish poetry into English. She teaches at the Low Residency MFA in Creative Writing Program of Pine Manor College, and lives in Santa Barbara, with her husband, poet Kurt Brown.

klipschutz (pen name of Kurt Lipschutz) is the author of This Drawn & Quartered Moon, Anvil Press (Vancouver, B.C.), 2013, as well as Twilight of the Male Ego, The Good Neighbor Policy, and The Erection of Scaffolding for the Re-Painting of Heaven by the Lowest Bidder. His work has appeared in periodicals in the U.S., Canada, and the United Kingdom, and numerous anthologies. Also a songwriter, he co-wrote Chuck Prophet’s 2012 disc, the critically acclaimed Temple Beautiful, “a love letter to San Francisco stained with tears.” He lives in San Francisco, his home of thirty years, with his wife Colette Jappy and three cats.

Marsha de la O’s first book of poetry, Black Hope, won the New Issues Press Poetry Prize and a Small Press Editor’s Choice Award. She is the winner of the dA Poetry Award and the Ventura Poetry Festival Contest. She has published in journals such as Barrow Street, Passages North, Solo, and Third Coast. She was a finalist in the Poets & Writers’ California Voices competition, and a visiting writer at ‘Writers’ Week’ at the University of California, Riverside. She was raised in the Los Angeles area and now lives in Ventura where she is co-editor, with Phil Taggart, of the literary journal, Askew.