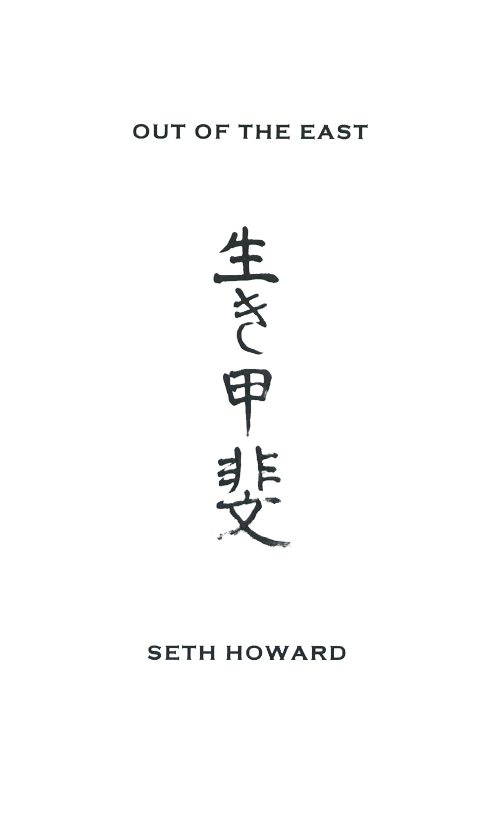 Out of the East

Cover photo: ‘Ikigai’ translation, “a reason for being”. Shodo drawing by Seth Howard.

To keep alive a sense of adventure and sparseness along with the hint of intimacies known and lost is the general thread of Seth Howard’s poems. The collection’s title OUT OF THE EAST signals to the reader his time in Japan as a student. To add there’s something of an expatriate flavor being put forth in names and games and rituals. Had Howard been an anthropologist, instead of an English major at the University of Connecticut, we would be less surprised.

Verse being altogether different from poetry in the contested areas of art today, Howard makes a show of it. His poems are written out of a desire to engage the universal lyric “I”, as well as the given poetic line of measure with all of its artifice. His stanzas impose themselves in generalized cadences of retrospect that maintains an interesting appeal. The attraction of it being the sound of a narrator’s voice as one can hear in a film:

A pack slung over my shoulder
And that burning grass in my mouth.

The walking theme in this poem is urbane and hopeful. More often than not there’s this existential voice prevailing, even in the banal. A particularly effective entry here is ‘The Shodo Master.”

This is the “meat moon” he would say
Cheerfully, and sometimes he would sit
At the back of the room, and draw
Characters of a different, time and place

In “Midnight Express” we have a train poem with all seats taken and a fair amount of smuggling made obvious. It holds a visual focus in its own lens. There is a lot of the “we” and the “you” in its forward motion with atmosphere and recollection going for it.

Seth Howard has been publishing in the touchable magazines lately which is really the testing grounds. It says something for his resolve in the tiny world of poetry where free verse and open field composition are a given. Yet postmodern adventures in poetics can be gamey, so too is Howard’s pitching capable of change-ups. Much as painting does, poetry lately sets the pace and makes confident the public. So Howard’s poems keep engaging company, never heavy handed. East from which the sun rises is seemingly lost upon everyone today. Howard could as well be conversing with the sun at times:

So the unsaid here and there still sounds like in bed with the vixen, which is the honored classical thing, receding if anything nowadays. — Tom Weigel

In the beginning, there were the animals
He wrote them on the board with a piece of chalk
Like an old poet, or some young curious child
This is how you write “wolf,” this is the character
For “bear” he would say, and then came all
The birds, he showed us how to write
“Monkey” and all the animals we had
Neglected to think on since adolescence

We all watched with apt attention turned
To the blackboard, we all listened to his words
And there was something about the way he spoke
Images of the animals floated across our minds
Pay careful attention to how I finish this stroke
The line returns slightly at the end, as all things do
There is a slight pause here, before the final
Sweeping up, watch how the brushstroke
Fades away…

He taught us the names of the flowers
That we had never seen in life, the exotic
Character for the Chinese orchid, old texts
Of old masters, written in tears, he taught us
How to write “moon” and what it was called
When it was written as part of another character
This is the “meat moon,” he would say
Cheerfully, and sometimes he would sit
At the back of the room, and draw
Characters of a different, time and place

But when I went to write my own-
Tears would well up inside me,
Tears were in my eyes 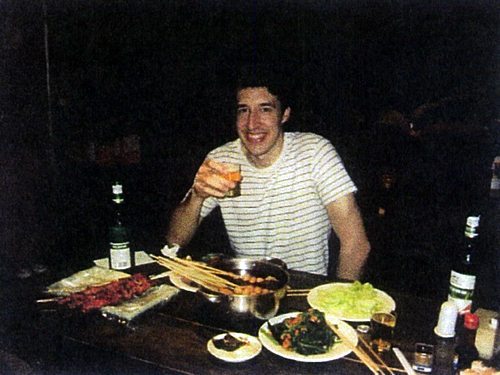 first started writing poetry formally when he was in Japan, studying abroad in Tokyo, taken by a certain poetic quality in the air. He gained much inspiration from traveling to Japan’s inaka (countryside) and various cities (later residing in Osaka). He would later travel to China, Taiwan, and South Korea (even now the influence of The Korean Wave on his art cannot be denied) but it wouldn’t be until he moved to New London, Connecticut that he would begin to write again seriously—while drawing from his experiences abroad. He often thinks back on his time spent in The East nostalgically…

Seth’s work has appeared in the following publications: Big Hammer, BURP, The Outlaw Poetry Network, and The Scope.