Maybe when I cross the Tiber and come clop-, clop-,
clopping into Ellicott City on a hunch and astride
a mule deer whose widened turquoise eyes
absolutely have me thinking
I’ve got a chance to scare the bejesus
out of ragtag kids playing dodgeball in the streets,
and maybe then I’ll gain some respect at last
from all five of the town’s Laotian hookers.

The breeze pushing through your furs,
the ever-so-gentle riffle of those mothers,
and me the only one here with IQ enough
to see the delicacy of using scrubbing compound
to get a violet sky to go to yellow (but no darker,
not one micron darker, and not a wooden shoe
closer to the night of your armpits, or the onyx
of the neighbor woman’s pussy, or the crumbly
obsidian you’re experiencing now as our train
funnels into New York City), and I freely admit
the gritty taste probably comes from my having
all of my left hand inside your mouth.

She may have been a mobster in another life, another iteration,
But goddamn the bark and the fruit of the vine
Snaking up some tree in long-gone Eden, I sure as shit can’t see
Bright signs of it, though of course at any one point in time,
There are countless things shaded from my eyeballs
Or playing hide-and-seek with my dick. Countless entities,
And many are probably entirely without my geography;
For instance, I reason there has to be at least one sexy Genoan
Female whooping up the good life in the Yukon,
And don’t tell me there’s not an elderly oyster plover
Flown in from Trieste and living out his final months
High-stepping through shoals along the Gulf coast
(While mucho, mucho preferring to stab at tampons afloat
Or snagged in sea grass, rather than this jabbing over and over
For ugly and elusive bivalves). And okay, okay, I did hear
She has a father-in-law who tommy-gunned his cousin,
Though I’ll bet he had his reasons, and that there’s nothing
Really there—nothing genetic—to link her with nasty blood
Relatives from Sicily and/or Naples. But if someone
Were sighting a howitzer in on my head and coercing me
To cough up some connection, obscurely enough, I’d cite
The trigger-pull reflex anyone can notice if they patiently
Concentrate on her left hand: It’s this kind of palsy
To bend-and-pull-and-close her index finger. Yeah, granted,
I myself think that’s quite a stretch, mighty skinny evidence,
But as I said, I have an artillery piece lined up
Against my brain, and so I’m trying to ponder things
On a somewhat expanded scale here, and slip beyond her
Having stereotypical weapons, criminal attitudes,
Or let’s-swipe-fruit-from-a-neighbor’s-garden kind of
Urges, in favor of her craving offbeat and hand-carried
Stuff, like flamethrowers, pea-shooters, or ray guns.

Snowbirds and their copper likenesses
and geraniums flaming out in slatted sun,
the javelins of afternoon go right through the bells,
our clothes, our skin, our bones,
and ‘genuinely sorry to have to tell you,
but that more than includes the lover
you’re sucking the daylights out of instead of me.

Back home my pet barracuda’s favorite vittles
are flotsam-after-flotsam helpings of curlicues
that bunch atop the sea wherever Neptune
has planed smooth that jagged trident of his.
Now our bulky jumbo jet is later than usual
landing in Santo Domingo (something about
air currents being strong enough at altitude
to keep pushing against the jalapeño fuselage
and shoving my sex back inside my bluejeans,
while the joyous winds make each of us
seem tardy on arrival), so I haven’t had time
yet to duck inside a stall and metamorphosize
into a flashy silver suit of scales and gills.

Oh, lucky, lucky you, you’re going to assume the role of a German admiral in the Great War, one of those often tall, frequently trim, mustachioed elder children of Kaiser Bill and his brand new navy, one of those seamen who affect amazing maneuvers with dead-weight iron boats through smoke and fog in the age of steam. But for now, shit on such historical-setting palaver and perspectives, mama-screwer, ‘cause it’s the stricter, more disciplined personae we’re after here, with you as an authoritative and uniformed man semi-strangling in his dress-code neckcloth, but absolutely in charge of all the friendly warships on the charts in front of his herky-jerky torso.

And, see, sonny, that’s your swell role, and you don’t have to change your everyday-self all that much, now do you, simply because you realize hostilities will end for you and the fleet come Jutland. Just let me roll up the charts here, if I might, and then I’m going to push your hatted head down much, much closer to the wormwood table in front of you. Atta boy, commodore, put your back into it, and let’s get your ear within, say, a dozen millimeters of the table-top, and just hold it all right there: freeze and listen up, freeze and listen hard. Be assured that for as long as I’m able, I’ll keep the rest of the world at bay and hushed like a bordello at sunrise. So, now, can you hear any worms yet? Can you, herky-jerky? When you do, tell all the rest of us, admiral—we plankton floating around your puffing ships—oh what in hell does one worm sound like inching through some real good wood? 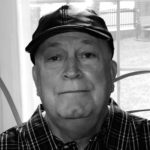 William C. Blome writes poetry and short fiction. He lives in the ‘States, wedged between Baltimore and Washington, DC, and his work occasionally makes it to print hither and yon.