And perhaps through no choice, but to survive;
He was a rebel,Flick was his name.
He slept with the dustbins, ain’t that a shame?
They called him Flick cause he was good with a knife,
And he didn’t give a damn about taking a life
Not from no-one……….not from no-one.
He weren’t on the dole, and he had no job
To earn his livin he’d mug and he’d rob
On the sidewalks…………… on the sidewalks.
A victim he’d find,”Hand over your cash,
Or I’ll leave you dyin with a septic gash
In a pool of blood.You don’t believe I would?
Well try me………… shouldn’t have tried me”
Flick heard a sound, turned around
To stare at a twin set of headlights
Sees a blue light flashing,hears a two tone noise
It was the lads in blue, with the heavy boys
They’ve come to get him ………….
“Hey man! You’ve committed a crime
Hang up your blade, serve out your time
We’re goin put you away in a padded cell
We’re goin to make your life bloody hell
Forever…….. Forever. “
Flick stood there, held his ground,
Pulled out his blade, cops all around
” Hand it over son, that’s evidence.”
Flick lost his cool, an’ made for the fence.
BANG !!  With a hole in his back
He fell to the ground like a crumpled up sack.
No more of the man who thought he had it made
No more of the man who carried the blade
On the sidewalks ……… On the sidewalks
He was a rebel, Flick was his name
But he ain’t no more, ain’t that a shame
They called him Flick cause he was quick with a knife
But not quicker than the bullet that took away his life
He’s gone forever
Flick of the sidewalks
And for how long ? 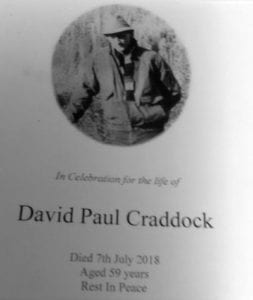 David Paull Craddock was a self taught artist and writer whom was snatched from our lives too soon he had a heart of gold and could be the biggest pain he was a loveable rogue who lived life to the full unfortunately he was taken by cancer on 7thJuly 2018 our love will always be with him.