Far beyond his native climes
the devil’s best tunes play straight man to the functioning brain’s psychotic jester
Unto that fringe of mankind marked by enough subhuman cunning
to give him his due in the most original ways:
With childproof drunk tanks,
jellyfish wedding cakes
& queer-for-children monotones;
With whore’s handkerchiefs,
laughter of the dead
& cribs with loosened screws;
With clipped wings,
tough runs through the locker room
& a great many other methods he’s known to tolerate—
All to comfort the beastly dumbed that even while high on pure evil’s pecking order
it’s still better to try to be loved rather than feared,
If only for the sake of the ones keeping their inferiors assured
that where there is as little humanity as possible there are as few potential problems;
And just as much for the ones who claim they know what that means
The ones who pay the guys who write the editorials claiming they know what that means
The ones who cheat pogrom calls by denying they know what that means
The ones who say they know what that means but won’t admit it on the record
The ones who actually do know what that means and don’t care—
For everyone other than the disreputable little wretch who actually coined it,
wept its early drafts,
discussed its crafting with lesser scribes,
troubled heaven with laments over his dearth of inspiration,
fretted over the wording through many a dark night of the soul,
eventually revised it to satisfaction,
hacked it out to the masses
& thus defined himself as a man unfit to live—

As is the fate of those whom genius does naught but dote upon;
The fate in store for those who manufacture wax-and-feather wings from tyrants’ corpse displays
& proceed to fly just as high in their own personal estimation
Only to fall as hard as whatever king-dame diablo may have motivated first their role models
& then themselves,
But manage to croak out gruesome revelations in the minutes before death
to those who best inhabit the last refuge of scoundrels;
And for good measure to the guys beneath the woodwork
who run the machines that put them in control,
And who on paper hand them full emergency powers
assuming they’ll be easy rubber-stamp fodder
But make the crucial mistake of also thinking they’ll be child’s play to keep in line,
And so before a year is out find themselves packed off to the pen for cultural refreshment
Where they self-destruct on gulag rations awaiting their turn
to bite the anti-aircraft mouthwash,
Sniveling themselves into breakdown at every roll call,
Vexed utterly by just how in the hell
they’d had the tables turned against them,
Lamenting especially the mental image of their scurrilous protégés
now too at large in the pleasures of the harem even to notice their absence,
let alone to spare a laugh at their expense;
Busy as they are refining pain-of-death decrees
over cigars so good they’re said to be a state of mind,
Playing down a deferent-imbecile status long renounced
by giggling over photographs of those they’ve gagged,
thrown in tanks
& forced to swim naked with each other
until it’s high time to loose the tiger sharks on them
As punishment befitting those who just had to let perfectly good
lack of wisdom go to waste,
Ever-present as it always was in the bulk of their mentors’ subjects,
Who seemed to see it most in the same mirrors
in which they debased the act of seeing God—
Like everyone condemned to find it everywhere but by the paths
whose locations are the most slanderous open secrets;
Jeweled slipstreams to well-tended trenches heaving with the ghosts
of those who know they’re headed there while still alive:
The tumor collectors, celibate zookeepers, drunk magicians
& pimply chemists
The bumbling undertakers, one-legged matadors, smallpox enthusiasts
& talkative hunchbacks
The quislings’ descendants, blond-beast apologists
& anyone else whose estimation of themselves is as easy a first casualty as truth;
Any human-smoke-without-hellfire specialist who demands to be humbled as such
amid the act of love
As a means to expedite the addition of subtle grace notes to the thought-free opus
in those freelance salons of abdicated conscience,
Flush as they are with hugely qualified flesh-lampshade candidates
worth their halfwit weight in songs of innocence,
Kooky over the non-virginal depths they’ve plundered,
the necessary assassinations for which they remain closeted hopefuls,
the birds they pay to spring from cages just to cover in honey & lure into active beehives
& the vermin du jour who sway from hunger fatigue the way lynched bosses
tend to swing in pleasant daydreams,
Whatever comforts them the mortal coil can indeed be more than a thing that must be tolerated
unto death—
Wrongful, deserved, merciful, unfinished,
protracted, predicted, welcomed, overdue,
Any kind that can’t come
soon enough

There is enough guile, self-deceit & naked cruelty in the ordinary mortal
to sate the bloodthirst of the most cantankerous sadist
Enough barbarism to grind chivalry into gunpowder
So vast a well of egotism as to starve the species
into every kind of death before dishonor

Blame it on those standard-bearers of cruel & unusual simplemindedness,
Whose corpses bar the entrance
to the road not taken—

On the dolled-up abominations weaving drunkenly through the bloody orchards,
ice-sculpture playgrounds & ribcage mansions of the heart,
Raiding empathy’s vacant charnel house
with every instinct of the quickly murdered—

On the walking lobotomies bantering in simian phonetics
as formless as the fuming wastes between their ears,
Awash in all the thrice-burnt bridges to whatever nowheres populate
the mind’s eye of the madman—

On the brutally dull & terminally enlightened alike,
Whose fantasy flunkeys groove to the old tunes,
the new tunes,
the show tunes,
the blue tunes,
yet remain unmoved,
For fear the distance between hearts can still be split
by fate’s eunuch-love-the-sinner routine;
That aging set piece which demolishes the ways & things
the neurotic puts away to make room for organs as unnecessary as the muse;
A graying mistress looking every minute of her immortality clinics
Though her vigor gone to pigs as hard to satisfy—

On the zeitgeist’s vegetable gladiators,
Content as they are to slumber on the world stage’s velveteen duvets
with guards at each corner,
Tended by many a purebred failure drawn from the most selective pleasure cadres,
Who shrug off such macabre largesse as the lack of shame inherent in turning a buck
While gargling up unfinished epitaphs too sobering to enhance the courtly jollies,
Then rehearsing them to the wife, the termites, the audience of one
In as real a time as the con man’s passage
through the halls of bedlam’s open borders—

On those creationists in regard to ideas they ought to have been bred
out of existence for retaining,
Whose prehistoric senses force retreats into
the monkey theories that prompt their social missteps,
And invite their own end in the rush to drown out
the ape-to-amoeba musings of the voices that might be only in the mind;
Which are calibrated, set to function,
then damned for not knowing when to shut up,
The conscience pleading prior engagements when begged to intervene,
Long resigned from all but the full & final proof that there really is something odd
about existence—

On those whose accidental magnetism
dwarfs the symptoms of the most majestic bullshit artists,
Whose employed killers sharpen warthog grins at frontiers a stone’s throw into the future,
Dumbed into rosy psychoses as clockwork vertebrates keep them well-heeled for feeding time
in the revolving-door dustbins of their character flaws
Where they polish starry-eyed homages to themselves
with all the hoggish renunciation we’ve come to expect from the least of our species,
Playing up the usual higher-primate careerism
through the fixed-pleasure robot pale,
Eternally at the mercy of those who confuse the last place on God’s earth
with the last thing about the human heart

So states the most heinous incarnation yet produced
in the history of the human loon;
One whose actions more than mirror the extremes such a burden suggests—
He chloroforms orphans
He shaves with sharpened bones
He strains his blood into test tubes & stares at it for hours
He braids his ear hair
He photographs his victims
He prowls the streets demanding pedestrians touch his head for good luck at a dollar a touch
He pays himself off
He decides he exists
He avoids work with the best of us—

Indeed, no unbiased observer can help but be struck
by the quantity, variety & quality
of the lesser sanities for which he’s responsible,
Along with his equal proficiency
as both abstract crazy & pragmatic maniac;
No purely meditative nutter, this,
but one who applies his degeneracy to constructive pursuits,
At times even toying with disinterested contemplation—
By frequenting infant funerals,
Petitioning for a reinstatement of the gallows,
Refusing to take a bath without a disguise,
Proposing a constitutional basis for enlightened despotism,
Writing hagiographic accounts of obscure but unusually ruthless historical figures
with as little regard for truth as the subjects had for human life,
Redefining the difference between a sociopath & an avid reader,
Snorting lice, extorting clergymen, betting on the results of shotgun weddings
& confusing the man in the mirror with the man in the moon—

Fortunately, none of this dilutes his social prowess;
Our hero delights in taking an entire morning to get dressed,
then joining the boys for polo at high noon,
After which he appears at upper-crust enclaves around dusk for a late luncheon,
Then makes the rounds of the brothels in the small hours
with fellow future masters of the universe
In conscious imitation of genteel dandies of yore;
Such a cosmopolitan pedigree offsetting the suggestions of those who claim
he’s no more than one resigned to the grind of the mind he’s left behind,
One whom after all those comely deeds still evades description;
Known only as the consummate lost soul
Everyone’s favorite terrorist/freedom fighter combination
The lone apocalyptic ego it’s okay to hold dear;
One who, when he turns his eye to the world that disowns him,
sees little to restore his reason
So to this end works to transmit his ideals to all with ears to hear,
Fooling himself one day he’ll be known as anything other
than what he is,
was
& ever shall be—

The common modern madman,
As cursed as his detractors
to live in interesting times 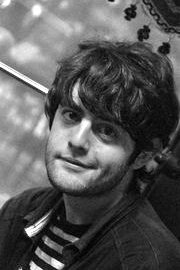 David Cicerone is a visual artist currently living in Chengdu, China. He is also the author of five collections of poetry, including Alexandria Through Hazel Eyes, forthcoming from Saigon-based publisher Hawker Press. His artwork can be seen at flickr.com/davidcicerone.