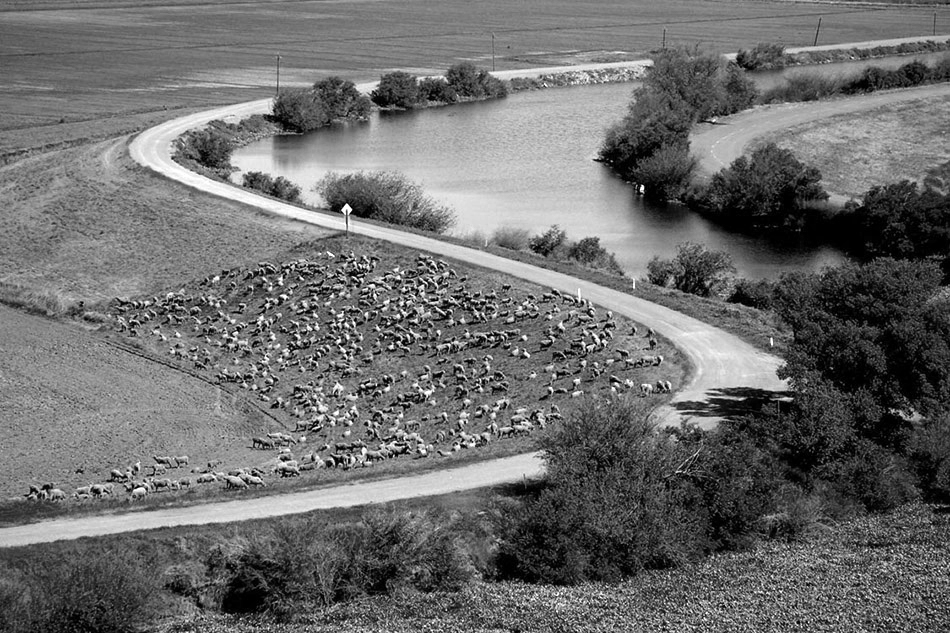 The bend in the Old Levee Road

(translation from frisian by L.J. DeVries)

Under a wiped clean nightsky cruising in my sun chariot
not drunk, no don’t !
but still speeding like a bullet along the narrow road
from a gunslinger fate toward the last spaghetti light.
A route cloned from Least Heat-Moon and Pirsig
but joined by StarTrek and Enterprise too.
My comet spun out of control in the glorified bend
of the Old Levee Road to ‘Yonder Rock’,
that’s Red Rock near Furgum town;
not the one buried beneath the infinite snow of Wyoming
but between more unassuming potato fields of old Barra county.

I drove dangerously, but felt salvaged from above,
cruising half outlawed through the countryside.
80 mph roaming the road touching steel smelling rubber
I tested the appearances of farmers lined up
along the remote & endless Backwood district roads.
For I knew them, their blooming field of yellow tullip,
and the red Marshallplan tractors operated by their fathers.
I knew of bodies burried under the backyard washingline.
Of Mennonitehours beyond Tzummarum town.

And I saw fields, barren wasteland.
A desert.
Sheep looked like nomad tents pitched for survival.
Farms, eave high roof mighty,
dromedaries in its vastness.
Whilst yonder traffic trekked along the distant freeway
in droves to scoop up ready gold on California’s coast,
a part cherished for most horrible dangers.

I was chased in my double lane.
I imagined a gang on horseback, fallen from the sky.
Like raptors or money madness hidden in drones.
It was – i realize now – swirling stampede dust.
But it crossed my mind it followed my tail all the way to Harlingen
or any other necessary trembling beckoning refuge.
Mitigating circumstances?
My headphones than.

The stagecoach. The snowstorm.
Double-barrelled shotgun beneath the rearwindow.
I was the scare of the Backwood region,
with many shot potato farmer on my conscience,
elegantly justified with dashes on the speedometer.
One for each horrible decision in the end.
The Northerners had their chances in abundance –
I put the pedal to the metal for I could go faster,
I couldn’t be overtaken anymore.

As fast as I drove, as slow I clearly understood:
These fields I sped across and wholly through,
seemingly bathing in evening light and illusion,
were preyed upon by earthlevellers, soildestroyers & acidspreaders.
And from my long, way too long flashback I learned
to love these fields even more than before.
I was a one-man convoy,
serving as dark space seducer of the people.

At the next crossing I called the hangman.
If he was ready.
And tear this land apart with his own hands.
Hang the noose around its neck, cut its throat with an axe.
Surely, such a thing really calmed me down.
One time only, truly interstellar, unstoppable broken adrift,
past the stead once the noble mansion of a holy knight now dead,
great peace came over me –
even the dark waited to set in –
which I lost again.

Dramatic end of this poem:
On the horizon the sunship sank beneath the skyline,
sullen, struck down & dying half hidden yet visible behind the ROP (Residual Offal processing Plant) it hindered my journey back home.
Whether with or without showdown:
it vented its revenge with a well aimed shot in my back.
There and then, without inconvenience or suffering, O Saint Brendan,
Mr. Spock escaped, listening to the (at that time)
newest Motown song.

No doubt, beam me up.
The sunset really wasn’t that fiery or happy and healthy after all.
The toxic summer we, this strange like poem and I, hold secret (clearly noticed),
solidified on local rugs under a nocturnal cross:
its westerly winds, whiskeys and radiation pills
didn’t bring me any law.
Set out? How, why? No certainly not.
The little orange night light almost glowed familiar like back home.
I turned over in my bed and calmly carried on nodding off.
Like a child, playing under dual stars,
past the bend in the Old Levee Road and burn-out
simply back home.