Melody and harmony breeding
tears as we return
to your meditations 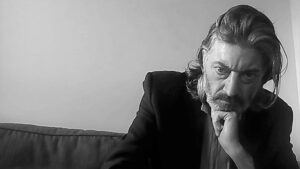 Mark A. Murphy is the editor of online journal, POETiCA REViEW. His poetry has appeared in over 250 magazines in print and online. He is the author of 6 full-length collections including The Ontological Constant due out in June, 2020 in a bilingual German/English edition from Moloko Print in Germany.

Milner Place (25 January 1930 – 28 May 2020) was an English writer most well known for his poetry. He was born in Thirsk, North Yorkshire to Dorothy F. Place and Tom Place. He had three siblings, Ullin, Dorothy and David. His brother Ullin Place is well known for his work on consciousness as a process of the brain. His sister is a well-known sociologist.Early in his life he worked as a forester. From 1948 to 1950 he served in the military, he then studied briefly at an agricultural college, worked as a bartender and managed the family farm. Place lived much of his life on the sea. In 1953 he sailed to South Africa where he worked in a copper mine. In 1955 he returned to England and worked as a journalist. In 1958 he sailed to New York City and from 1958 to 1961 lived in the Bahamas.

In 1961, he bought his first ship and sailed it through Miami and England to Mallorca. During the Algerian War, he was a smuggler. The years 1962 and 1963 he spent in Bilbao and Madrid. In 1965 he captained a sailing ship built in the Netherlands to Lisbon. In the following years he drove several ocean races with Juan Carlos the future King of Spain. In 1966 in Denmark he turned a barge into a yacht and in 1967 and 1968 he ran a yacht charter in Malta for wedding couples and regularly sailed the route via Lampedusa and Tunisia. In 1969 he was a consultant for Forte International Hotels in Sardinia and Greece before he organized a fishing fleet in Ecuador. Shortly thereafter, he fled to Peru on charges of alleged piracy. He then worked for the Manu River Project and for similar projects in Brazil and Panama. In 1971 he returned to England before working for time in the Canary Islands as a photographer. In 1973 he traveled to Mexico to write an ultimately unpublished novel. While struggling with the novel he took up poetry as a relief from working on the novel. In 1976 he moved – now with his partner Dorothy and the stepson Paul – to Mallorca.

Milner Place was an editor for Poetry Circle, a forum for contemporary poetry in the United States. He wrote his first poems in Mallorca in Spanish. After his settlement in Huddersfield / UK in 1987, he began to write poetry in English.