HIDING THE GUNS FROM OUR MOUTHS: THE STREET MILK OF DARKNESS

poetry is dangerous work. Dangerous because nobody pays you to do it. So, why try, right? Dangerous because it can tear off the top of your head and expose the deepest most secret part of your self to the universe. And, dangerous because it invites all your private demons to dance on your eyelids. I read STREET MILK when it first came out several years ago, thought about writing a review, but had no real place to publish it. Since then the book has haunted me in strange and peculiar ways. I’d known Robert Swearingen only because we had occasionally appeared at the same readings. But I didn’t know Swearingen’s work that well. I recall his reading Interview In Milwaukee which was a savagely comic take on a poet who is interviewed for a job by feminist but I didn’t know much else about the man. I didn’t know that he was from Hammond, Indiana, which is not that far from Chicago. I didn’t know that he had a degree in English. I didn’t know that his uncle had worked most of his life for the Illinois Central Railroad. My grandfather, my father, and my uncle had all worked for the Illinois Central back in the 1920s.

STREET MILK is one of those flawed, imperfect books that occasionally flame to life like a damaged roman candles. It is a book of brilliant sparks rather than huge explosions and maybe this is partly why I am attracted to it. The Hal Sirowitz blurb on the back cover of the book is really misleading. Sirowitz invokes the name of Charles Bukowski to make his point that this is a book about work and survival and while both of these themes are interwoven in many poems, STREET MILK is really a kind of journey through hell. Rimbaud is a name that could more easily be invoked. Or, Dante, though it would have to be a secular Dante, an addicted Dante, a Dante inflicted with nightmare visions and the horrors of the streets.

Robert Swearingen’s poetry is nothing like the poetry of Charles Bukowski. Swearingen’s poetry has a kind of shattered lyricism to it. Bukowski’s poetry comes at you like a thrown chair in a beer bar where the juke is going and a worn out hooker is trying to dodge the bottles in the air while she is putting her lipstick on. And, while Swearingen’s poetry is also about addiction, it really deals with the visions that addiction bring. Not the polish highball hangovers, the gut wrenching vomiting, and the howling hysterical landladies who are hounding Bukowski for the rent. Both Bukowski and Swearingen may have inhabited some of the same worlds including the bars but they are looking at the world with very different pairs of eyes.

And, this isn’t bad. What it means is that Swearingen isn’t trying to be at all like Bukowski. What it means is that Swearingen is attempting in this book to find, maybe to rescue something from his own broken world. Since I don’t know Robert Swearingen very well, I have no idea how long he has been writing poetry, how long he has been working on the manuscript that eventually became STREET MILK. The book was published in 2002. According to the brief bio on the back cover of the book, Swearingen was born in 1946, which means he was fifty six when STREET MILK appeared. By anyone’s standards, fifty six is late to be bringing out a first book of poetry. Late, but brave. It is often foolhardy to be publishing poetry at all, since so few people read it. But it is always brave because it is a wager made against the void. An intimate bet with the blood that what you wrote is worthy of being read and remembered. Even for a nano second.

This epigram which kicks the book off so aptly was written by Francois Villon. I can’t think of a more fitting way to begin STREET MILK. Villon, who was both outlaw and teacher, could just as easily have been Swearingen’s brother. In fact, he is the spiritual brother to anyone who writes from the street, the bar, the skidrow hotel, and even the jail. Villon continues to provide the archetype for the poet who writes from under the floorboards of any culture.

When Villon writes, I’m shaking tooth on tooth, he’s speaking for all of us. Especially, Robert Swearingen. Villon is talking about a kind of primal shaking when you encounter life at its rawest. And, Swearingen’s best poems capture the visceral feel of that shaking.

STREET MILK could easily have been an autobiographical novel. The first section focuses on Swearingen’s childhood, his railroad man uncle, his grandmother who locked him away in the basement, and Swearingen working at Bethlehem Steel. The best poems in this section are Hero Worship, Uncle Archie’s Basement, Gary Indiana, Bethlehem Steel, 265 Days Without An Accident. The best thing about these poems is that they were rooted in a gritty midwest reality that I knew. I wanted to know more about Swearingen’s father, the grandmother and why she locked him away, Uncle Archie who liked his whiskey, and Jimmy the friend who went missing. Maybe Swearingen will write more about these people in a future book of poetry. I hope he does because I care about them. I care about their shortcomings, their brokenness, their passions, and their deadendedness. They are really what good poetry is all about. They are the kinds of stories that make us all dream.

The second section of STREET MILK is a quantum leap from the reality of the railroad yards, grandma’s house, and the steel mill to the floating surreality of alcoholic visions. Three Day Drunks Usually End Ugly, the poem that opens this section, is the kind of hallucination that you don’t easily forget. And, while this poem could have been a little more tightly edited, it still works powerfully on the imagination. When Swearingen writes, Someone is looking out through the bones of my face, you know he is taking you to a whole new level of the visionary experience. This certainly isn’t where Bukowski wrote from. In fact, it comes closer to A SEASON IN HELL or maybe NAKED LUNCH. Swearingen follows this line with the following lines.

Not all of the poems of the second section are as good as Three Day Drunk, but several come very close. I really liked The Funeral, Street Milk, Insomnia Redux, Gunshots From Lovers, Shopping On Acid, and Insomnia. In fact, I think Gunshots might be that one perfect poem that Swearingen has written so far. It teeters right on the edge of oblivion. The last couple of lines are just plain gorgeous in their suicidal simplicity.

while we collected our sonnets of glass
and hid the guns
from our mouths.

Have you ever come across maybe two or three lines of poetry you wish you had written? These are the three lines in this book that I have fallen in love with. STREET MILK is what I would call a beautifully damaged work of art. Damaged and powerful. The laughter in Interview In Milwaukee and Shopping On Acid approaches a kind of down and out slapstick. These poems are, by turns, hilarious and horrible and at the same time you know that what you are laughing at is a glimpse of the void. 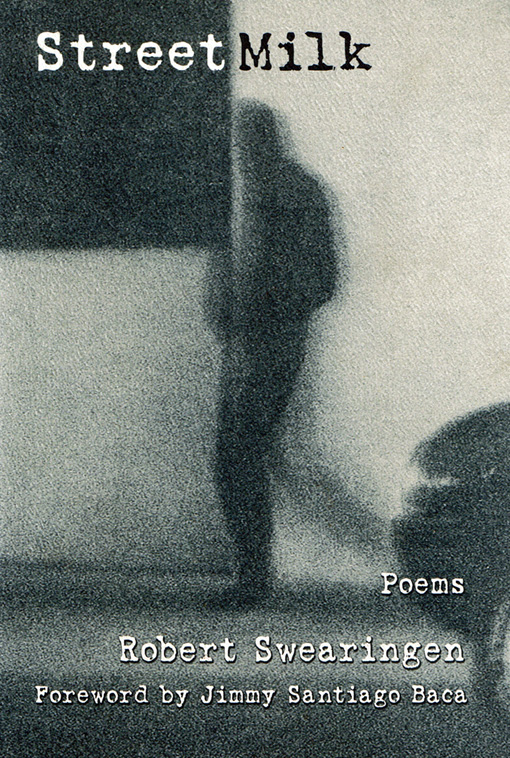 Please click the image to see the back cover.

In this collection of 44 poems, Robert Swearingen takes the reader on a journey through a life that is by turns raw, humorous, and at times, poignant. With a brutal honesty that asks for neither pity nor condemnation, he speaks in the context of personal experience, of a life of material success, selfishness, loss, folly, loneliness, and the hope for a redemption that will transcend the mistakes of the past.