Nothing Lorca ever wrote prepared me for this. There is nothing in Play and Theory of the Duende that is even remotely connected to conjuring an archetypal character’s death. Lorca is a genius at conjuring the duende for the writing of the poem, but that’s all. He writes nothing about how to kill off a Hamlet or a Quixote. There is nothing written that I know of that deals with murdering Joseph K or Ahab. And, when I stop to think about it, I realize that it wasn’t so much the commercial failure of MOBY DICK that nearly drove Melville to madness. It was the psychic loss of Ahab. And, it’s a curious sidenote that Dostoevsky only lived a few months after the appearance of THE BROTHERS KARAMAZOV. Because Dostoevsky had to know that by murdering Old Man Karamazov he was also murdering his own father, some primal part of his own being as well. The two bloods were merged into that archetype.

I’d read Robert Warshow’s The Gangster As Tragic Hero. I’d seen Bogart in High Sierra. I’d seen Cagney in White Heat. If the poem was going to have any authenticity about it at all, Dillinger had to die. But how was I going to do it? Should I just simply do the section as straight reportage. A crime reporter gets a tip that the cops are positioned outside the Biograph, waiting for Dillinger to appear. It’s simple, it’s clean, and it’s been done a hundred thousand times before. Did I want to write a straight noir finish? The alley would fit. Have lots of long shadows hitting the wall. Have Dillinger crack wise when he realizes he has been cornered. Maybe even have him reach for a gun. I knew I could never beat Bogart or Cagney. They’d already done this to unrepeatable perfection. I had to do something else. Maybe get inside Dillinger’s head but I didn’t want to do the life flashing before the eyes routine. I needed something new, something as visceral as sweat on the forehead and blood in the mouth.

I read THE TIBETAN BOOK OF THE DEAD. I read THE BOOK OF REVELATION. I read some of Elizabeth Kubler Ross’ theories of death and survival. But this had to be a blood thing, total blood. It had to do with real dying and no real promise of survival. It had to be slomo instant, it had to be the shock of bullets invading the body, the rape of the body by gunfire, it had to involve as much of the totality of death as possible. Or is any totality of death possible at all? I didn’t know then and I don’t know now. I just simply had to invent it.

And, by inventing it, I had to feel it, I had to live it, I had to die it, I had to implode into it. Even now, every time I read THE CORPSE IS DREAMING now, I do feel it. I honestly don’t know how I came across the title. I recall taking a look at Herman Broch’s novel THE DEATH OF VIRGIL which is about the last day of the poet Virgil and all the thoughts he had at the time and in the time. It was a four or five hundred page novel it looked clotted with language it looked heavy with so many ideas and it occurred to me that death and the process of dying isn’t so much in the ideas but in the loss of ideas and the speed of the loss. William S. Burroughs’ THE LAST DAYS OF DUTCH SCHULTZ came to mind, but I didn’t want to make this poem into faux cinema. Burroughs had already done that too well. He owned the franchise. I also remembered seeing a book years ago on the shelf in Woodland Pattern, a Milwaukee, Wisconsin bookstore. THE CORPSE DREAM OF N. PETKOV is a short novel by Thomas McGonigle and is about the last few minutes before a man is hanged in Sofia, Bulgaria after the Second World War. I’d thumbed through the book but hadn’t read it though I knew the premise. And, it appealed to me very much. But, the format of the novel with it various type fonts, long paragraphs, lists of names, and other digressions made it all seem slow. The gimmicks got in the way at the instant of the actual death itself. This made them a major distraction to the way death works or instead of saying works lets just say happens.

With Dillinger, this had to happen wham right now with everything in his body shorting out, all of his nerve circuits beginning to fail, his eyes blinking out, his blood slowing down, the feeling in his hands and feet flickering like visceral lights going out. I know McGonigle’s book was more intellectual in approach. And, distanced. Everything is seen from the outside. And, Dillinger was anything but intellectual. Somehow I had to get inside that death with him, just as though I was crawling into a death bed with him. I had to lie next to him, listen to his failing breath. I had to somehow see the clots of darkness gathering in his eyes.

Once I had the line The Corpse Is Dreaming, I also had the title. And, I think I knew against knowing that instead of conjuring the duende for the positive energy of the poem, I had to conjure death for the negative energy of the poem. This probably wouldn’t be so much of a conjure since death always accompanies the duende, but this time I had to focus on death as much as the duende. Maybe even more. The duende brings a positive charge. Death brings a negative charge. I absolutely needed that negative charge and I needed the full brunt of it all the way through the writing. So it could reverberate all through me. And, while I was writing, I could feel death’s negative energy ricochet through all of my dreams. I could feel death’s massive negative energy stutter through every line that I wrote. I could feel death’s negative energy bring such a black charge of electricity that it floored me the whole time that I was writing. Not literally floor me but psychically floor me so that when I finished writing I was totally exhausted.

Years before writing this section I recall hearing a recording of Tibetan priests performing throat singing which is a hypnotically guturral way of chanting a song and while I was writing I could faintly hear this long primal hum and thought that this was the way that language was blurring into all the dark sounds in Dillinger’s head. That this is the way that a corpse really dreams. It isn’t in complete sentences or well chosen words, it is in the wounded language of the man who is dying. That has to be it, that has to be the way that death works on language and thinking. And, even if it wasn’t, then it had to be for Dillinger. And, I couldn’t help but dream it.

The other thing I realized was that I had to try something that I can only call trans thinking or thinking beyond thinking for the writing of The Corpse Is Dreaming and also for The Night Corpse which is the very last section of DILLINGER. Thinking beyond thinking meant for me trying to dig out of Dillinger’s wounded psyche those things he might not be able to express but things that might have fleetingly occurred to him while he was dying. And, thinking beyond thinking meant for me the breakup of his language. The actual going away of the words from his consciousness. In later poems, which will appear in the middle of DILLINGER I have been playing with the speed that words can fly down the page. The way that the conscious mind might play with them in the velocity of the way they occur in normal thought. I love the way that words break up in conversations, in the speed of the way they are used. For me, this is thinking while thinking.

In The Corpse Is Dreaming thinking beyond thinking is also maybe the body’s last ditch stand against death. Even while language is breaking up inside Dillinger’s dying, there is still that attempt to say something even if it isn’t the exact thing or the accurate thing. It is the thing that language and life are still momentarily made of.

DILLINGER is a massive poem. And, while it is still a poem in some kind of progress, it is also a poem that argues persuasively foreclosure. All long poems argue for closure. Some sections of DILLINGER work on me so powerfully it is difficult to go back to them. The Name Is Dillinger is one of them because The Name is filled with so much anti Whitmanian murderous rage. Relentless is another because inside it I can feel Baby Face Nelson’s homicidal and homosexual desire for Dillinger so strongly, so much so that sometimes I can actually feel long wounds of his body beginning to tear apart. But, maybe the most difficult poem of all to read either quietly to myself or to an audience is The Corpse Is Dreaming. Reading this poem is almost like making a promise that I will die right along with Dillinger and that act of dying is psychically exhausting. It is also an open invitation to the death wish, the voyeur, and the assassin. No one can write something like DILLINGER without dying a little. Though the archeytpe of Dillinger is part of the always, the rebirth of the self. 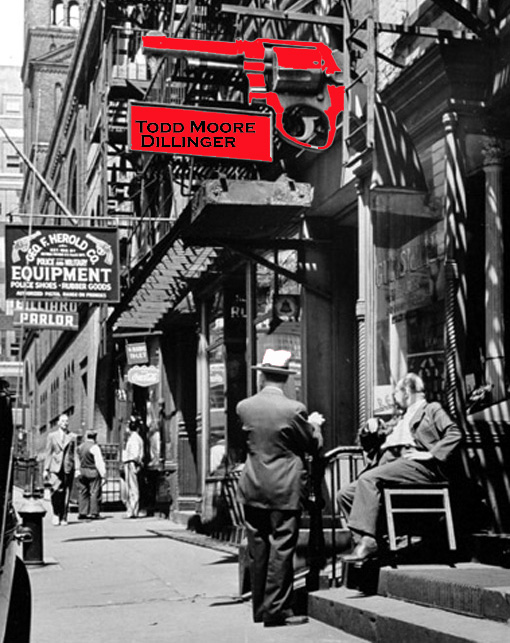