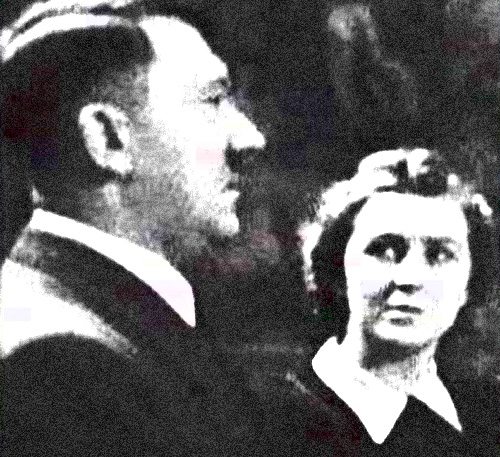 I didn’t cry fire in a crowded theater.
First of all, the theater wasn’t crowded.
And I didn’t cry fire or cry anything at all.
I probably merely murmured.
See I was watching this film about Adolf Hitler—
his last days in the bunker with Eva and his
typical dumb but pretty forties style secretary
(they don’t make them like that anymore,
thanks to the women’s movement).
Well they were all truly great actors,
the best I suppose Germany has to offer,
particularly the guy who played Hitler.
Wow. What a job. He managed to
get across both the historic monster and
the kind of sweet side (Hitler was, after all,
a politician, and a boss a “Munich girl”
couldn’t help but have a crush on.)
And then there was Goebbels und der missus and
killing, oh so tenderly all their children—
the idealism really comes across, no
doubt about it. End of any idealism for me. If
any was left at my advanced age.
Ok. I was supposed to respond with
understanding? With sympathy?
What happened was I came to realize just how strong the concept
“enemy” is. These were fucking Enemies.
I’ve been living alone quite a while now and
I suppose I talk to myself and I
might have murmured something
in the theater. All of a sudden
it’s a crime to respond to a movie you’re watching?
What the fuck’s been happening?
That wasn’t the way it was when movies were
movies, back in New York City anyway.
So some scumbag in the row in front of me shushes me.
Well fuck him. And fuck Hitler too!

From Big Hammer No. 10, 2007. Iniquity Press / Vendetta Books. This issue is available by clicking here…