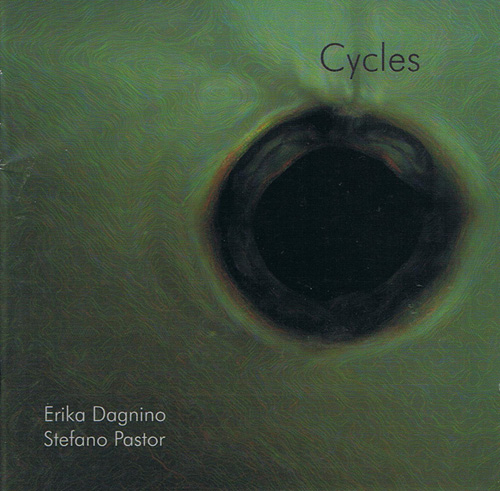 Cycles is a remarkable work, with literary and psycho-philosphical groundings and overtones, by a remarkable violinist, Stefano Pastor, in equal collaboration with poet Erika Dagnino. Pastor has, of course, a European sensibility—he and Dagnino are, after all, Italian—but his innovative improvisational conception is rooted in the development of the jazz tradition; it is not a eurocentric classical derivation. I shall not say much about either the music or the words, which, with attention, will sound and speak for themselves. And attention is in order—in the order and the chaos.

But, do you know that you are listening to a violin? It sounds uncannily like a soprano saxophone; on other recordings Pastor has also evoked the sound of the shakuhachi. But these are no gratuitous imitations but logically sited explorations of inherently discoverable qualities. There is a noble tradition of making the violin sound like another instrument, more than whistles and canaries. In a Caprice Paganini requires that it become a hunting horn, an instruction all but ignored by many virtuoso interpreters though not, for example, by that champion of new music Paul Zukofsky. On a broadcast transcription, Eddie South turns his violin into a precursor of the oboe: the ghayta or zurna, the shawm of Algeria. Stuff Smith makes a trumpet of his phrasing, in fact a whole brass section talking to a reed section. Seifert, following on from Ponty, transposes Coltrane. Mat Maneri takes a micro-tonal cue from Joe Maneri’s alto. And Pastor. All utterly violinistic.

The text of Cycles is prefaced with two quotations from Samuel Beckett. In fact, they are the work’s starting point. And nothing could be more appropriate for the to and fro of chaos and order. Here is Beckett speaking in an interview:

“What I am saying does not mean that there will henceforth be no form in art. It only means that there will be new form, and that this form will be of such a type that it admits the chaos and does not try to say that the chaos is really something else. The form and the chaos remain separate. The latter is not reduced to the former. That is why the form itself becomes a preoccupation, because it exists as a problem separate from the material it accomodates. To . nd a form that accomodates the mess, that is the task of the artist now.”

Is that why Dagnino’s writing accompanies Pastor’s music only on the page? That Pastor’s violin takes the sound stage only with some drums by Maurizio Borgia and some overdubbed percussion by Pastor himself ? For whatever reason, this is the successful strategy. No poetry and jazz here, thank the gods. And I ask you. Just how often has that ever worked? Mingus’s “Freedom”, ok. But the poets, almost always no. And I say this as the author myself of Poem About Music, twice performed with exceptional musicians: interesting but failings. Why? Because, ultimately, there can only be writing round about music. For the rest, only music about music. Yet Dagnino’s writing is here too, equally. Anthony Barnett

Featuring the violin, viola, percussion & piano of Stefano Pastor with the printed poems of Erika Dagnino. Both Erika and Stefano are Italian, while Stefano can also be heard on a recent Harry Beckett/George Haslam disc also on the Slam label, I hadn’t heard of Ms. Dagnino before this. The title track opens with some quietly twisted microtonal violin and stark drums from their guest Maurizio Borgia. Pastor reminds me of Mat Maneri, playing his violin or viola with those unique bent notes. It is a strong, well-balanced duo. On “From the Beginning After Forgetting”, Stefano’s strange spinning strings are joined by odd, eerie, breath-like vocal sounds and percussion that is used more for its suspenseful sound than for any rhythmic spice. Erika Dagnino’s poetry is printed in the liner booklet in English and Italian and it is supposed to be read while listening to this disc. The poetry is often fascinating and somewhat difficult to comprehend, but I find it fits well with the equally fascinating/difficult music on this disc. On “While Your Ear Was Leaning”, Stefano’s mesmerizing viola is accompanied by an undertow of mutated strings that rise and fall and become harrowing at times. The blend of Stefano’s disturbing strings and sustained piano chords on the final piece, “Epilogue,” seems like a perfect ending to this overwhelming and provocative disc. Erika Dagnino provides two short quotes from Samuel Beckett at the beginning of the booklet, I can think of no better inspiration for things to come from this disc and the following words. – BLG

“…In a perfect symbiosis, both the artists, inserted in the contemporary scene, upholders of a surely radical vanguard, give life to a widely creative work in which words, music and interior images are blending in a perfect union of artistic expression (…) Sound-word-vision are here one thing, they are equal and inseparable, they not observe any compositive priority, but cross each other in a whirling embracing of stylistic and expressive refinement…” Dino Plasmati – Jazzitalia – December 23 2007

“…What they realize together is a parallel montage, in which the Pastor’s suffered engraving in the musical substance are close to the texts by Erika Dagnino in a written form, not as a banal reading (…) The reading experiment is stimulating, with moments of nearness and farness between a word that becomes ‘round in the alliterations or scans itself in the internal rhymes and a “stellar” sound that frays and lacerates itself in a not recurring way.” Luca Bandirali – SuperEva Cinema – November 23 2007

“…not voice and instrument here, but a clear separation between the written page and the music. A text that, like in Beckett, denies the subject, flood of sensations desperately searching a consistent “himself”, a violin that follow with “quiet despair”, saying it with Waters, the same ways without any track of the words. Impervious and beautiful, never hard to listen.” Guido Festinese – Alias n. 44 – Il Manifesto – November 10 2007

“…The initial piece alludes to some passages of the historic recording “The Legent od Ai Glaston” by Leroy Jenkins with Andrew Cyrille, as well to the timbric explorations of Phil Wachsmann with Paul Lytton (…) there are the late twentieth century vanguards, with references to the Berio’s Sequences, the Lutoslawsky quartets and the mistycal fixity of Part” Enzo Boddi – Musica Jazz n. 11 anno 63 – November 2007

“…Cycles is a different litterary-music project that will speak to the most curious and will arouse them to other cultural horizons which do of the research, of explorations and restlessness about the cultural object, its strength and energy:” Sabine Moig – Jazzosphere (Fr)– October 2007

“…This is conceptual music, of course, improvisation without compromises, obsessive in a certain way, but able to wound, to lacerate, to cut. (…) ‘For interior voice, musical instruments and objects’, said the sub-title of the disc with splendid formula.” Luca Canini – All About Jazz Italia – October 2007

“…Cycles is a multi-medial opera in which expression and speaking about expression cross each other, in a succession of plans of fruition in which sight and hearing, reseption and reasoning, are specular: the art, in its making, declaredly talks about itself…” Claudia Salvatori – FertiliLinfe n. 1 – Summer 2007

“…The poetry is often fascinating and somewhat difficult to comprehend, but I find it fits well with the equally fascinating/difficult music on this disc (…) Erika Dagnino provides two short quotes from Samuel Beckett at the beginning of the booklet, I can think of no better inspiration for things to come from this disc and the following words.” Down Town Music Gallery (USA) – October 2007

“…A rarefied mix of emotion and high musical skill counterbalance each part of this recording in a way that is matchless and not inimitable. Pastor is totally attuned to the great sensitivities of self-awareness, transcendence and whole unity in which the expedition translates into music of subliminal proportions. He draws, drafts and reaches essential phrases, deploying his soul in each note that he circumspectly selects. These improvisational concepts will engross and thrill the listener, injecting into your force of will both tellurian and solemn directions. Sublime…” Ana Isabel Ordonez – Jazzreview (USA) – July 2007

“Cycles is a radical disc in which Stefano Pastor is always efficient. His strong intention to express a falsely consolatory obsessiveness is definitely clear: his violin screams, cries and give himself up to an hebephrenic tremor without reserve. But the more impressive thing is the lucidity with which the violinist from Genoa brings forward his own expressive dimension…” Gianpaolo Chiriacò – Jazzit anno 8 n. 36 – July/August 2007

“Stefano Pastor is an Italian jazz violinist whose newest work Cycles an interesting collaboration between poet and musician. What they DON’T do is put the poetry to music. In a fascinating way, the text and the music refer to one another, but must be taken in separately. A dense and challenging piece of work, but rewarding no matter how you cut it.” Mark Allender – Bowed Radio (USA) – July 2007

“…Who could say that Free Jazz by Ornette Coleman isn’t a manifesto opera? And Machine Gun by Peter Brotzmann? And European Echos by Manfred Schoof? Theese are recordings that leave deeply impressioned critics and audience. The new work of the violinist Stefano Pastor and the poet Erika Dagnino has the strenght to be compared with the previously mentioned title…” Cosimo Parisi – Musicboom – June 2007

And now something else. It is a really different work. (…) The music was builded on Erika Dagnino’s poem, that was translated in English to give strength and energy to the whole work. The release is allways innovating and ambitious. Radical improvisation could be surely considerated part of jazz’ history but this disk is not easy to classify. (…) This is a work that divides the opinions; a work without prejudice, an interesting work that the people will could enjoy it. Jouko Kirstila – Jazzrytmit (Finland) n. 4 – June 2007

“…Research and reflection. (…) You can’t have an idea of how could be interesting listen to thi violin in the dark. A violin which now make itself lament, and now sigh; now breathlessness and then anguish again…” “…The opera is also characterized by parallelisms perfectly reached between sounds which recall imagins in the poem, and word in the text which recall noises in the headphones to create an endless and interlaced spiral…” Pietro Martinelli – Genovatune – July 2007

“…His new album issued again by the English label Slam, and Stefano Pastor created it with a poetess: Erika Dagnino but, as we can read in the liner notes by Anthony Barnett, luckily it’s not poetry and jazz but really an opera for interior voice, as the sub-title says…” Ghighi Di Paola – Battiti – RAI Radio Tre – 14 maggio 2007

A writer and a poet, Erika Dagnino has contributed to literary and music magazines like: FertiLILInfe, Il Fiacre N.9, Quaderni d’Altri Tempi, SuonoSonda and the website musicboom.it.

She also worked with Italian avantgarde violin player Stefano Pastor, with English poet and musician Anthony Barnett, with American poet Mark Weber, and with various visual artists. Her poetry, fiction and drama appeared on various anthologies and have won her several awards. Among her latest works, Ru e Fro (novella), Cycles (multimedia, with S. Pastor) and Racconti dell’ombra (short stories). Much more on Erika Dagnino can be found here… or just click on any of the following book titles. 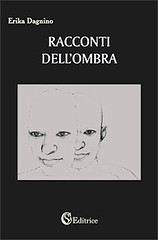 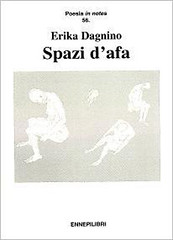