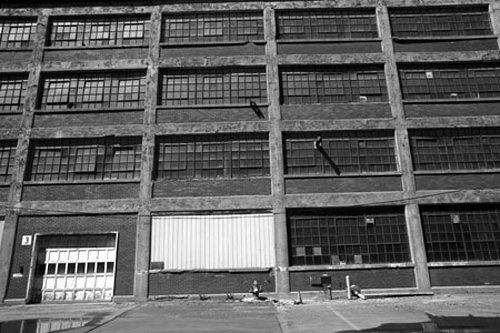 I remember well the times I was sent up
to work with the guys in Bulk Manufacturing
Way up on the third floor of the cosmetics factory
Where I worked the graveyard shift as a young man
A substitute for guys who called in sick
Up I’d go in the elevator
to factory heaven
At least that’s what my co-workers told me
They get to take it easy up there
an old codger in the Creams and Lotions Department had said
You’re gonna have an easy night
Grinning over my good luck the whole ride up
The industrial elevator doors opening with a loud creak
like the door of a monster movie horror house
Greeted by rooms as big as a football field
With incredibly tall ceilings
Like industrial gothic arches
Built to enclose
Huge vats the size of small houses
that rumbled and moaned
As they bubbled and boiled with the ingredients
of the shampoo we manufactured
for suburban, upper middle-class women
Which made hair silky and smooth,
just crying out to be touched.
My head tilted up in awe
at the massive silver cylindrical containers
clouds of steam whirling above
like mini manufactured meteorological systems
The overpowering sweet smell of shampoo
everywhere
I met the foreman
A big man with bulging fatigue-drained eyes
An industrial thousand-yard stare
He introduced me to The Guys
A longhaired unshaven bunch
All wearing bright green jumpsuits
And big black workboots
Young freaks
Wiry old codgers
Middle-aged guys from Eastern Europe and Central America

Come with me, the foreman said
leading me toward the simmering vats
beckoning me up the metal stairway
that looked like an erector set
His beard hanging over his uniform
Waving me up onto the metal catwalk
that surrounded the huge vat
a Captain Ahab of Mass Production
surrounded by whorls of steam
I looked down into the bubbling boiling ingredients in the vat
Huge beater blades reaching up from the bottom
circling like shark fins
roiling the gooey mixture
A wall of sweet shampoo smell
nearly knocking me off the walk
We got one rule around here, kid
Ahab yelled over the racket
Don’t fall in!
I looked down at the boiling froth
And the big beater blades whipping it into a whirlpool
Thinking of the human stew I’d become
Should I disregard the advice
Ahab led me to another cauldron
This one empty
The full one just for show~for safety’s sake
I helped him concoct another batch of miracle shampoo
his assistant for a night
First we hooked up firehoses to the bottom of the tank
Using gigantic pipe wrenches
Then climbed back on top
watching the house-sized vat fill up
Hearing the gas heater flare on underneath
Watching small bubbles gather on the steel sides
At last we began to mix the batch
Reading from the massive cookbook
laying on a small counter on the catwalk
Turning its ragged dog-eared pages
and throwing in ingredients as directed
A shovelful of this
A pailful of that
Dug out of motley boxes and bags
And thrown into the cauldron
Then we let it cook
for three hours
the best part of all
We had ourselves a seat on makeshift box chairs
around a makeshift cardboard table
Happily playing cards
with the guys
in their bright green uniforms
wearing hairnets
their big boots caked with industrial goo
I won’t forget their grins
laughter and wiseass remarks
in the shadows of the massive machinery
The evening passing leisurely and pleasantly
Sometimes even some fresh air
Blowing in through the small slit of windows
up near the ceiling
Killing off the hours
minute by minute
Until the end of the night
When we really earned our salt
Unloading the vats into the famous fifty gallon drums
One guy eyeballing the drum and signaling
the other guy opening and closing the valve
Never wasting a drop of that stinky shampoo
Like misers
mass production Scrooges
Measuring out and slowly filling the drums
until the vats were drained
Ending our graveyard shift night
Stretching and yawning on our way to the elevators
Muscles tingling with the sweet buzz of staying up all night
Comfortable in the thought that we’d survived the evening
We didn’t fall in
and were on our way
to our morning sleep-dream beds

Don’t fall in
Solid advice
Especially
In light of the potholes and pitfalls
Life has had to offer since.
Many’s the time I’ve considered the words
Many miles, moons and shampoo products after
the Company put a lock on the gate
and moved their operations overseas
and we all had to move on
me lucky enough to learn other ways and means
But still stopping to look past the locked gate
at the battleship-sized building
Remembering my times on the Third Floor
On the catwalks surrounding the vats
enveloped by clouds of steam
watching the churning ingredients
the foreman shouting
Don’t fall in