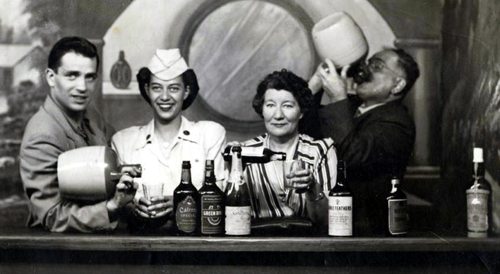 Jack Kerouac last night in Polly’s place.
He was doing shooters and shots,
toking on some pot.
He looked pretty good considering
he’s been dead how long?
A little thin, real pale,
worn away and crumbled,
like old blacktop.
He sat on the stool by the window,
doobie in one hand,
the other painting scenes
of long roads and lonesome women,
angry men in subterranean rooms
talking stuff that no longer matters.
I ain’t too sure it’s him,
he could be one of those drunk fucks
always talking to themselves in the dark.
Oh, he talked all right,
so soft no one heard but me.
He argued with Ginsberg and Snyder,
seduced some black woman named Yolanda.
His voice was hard and edgy and demanding,
not at all what I’d expect from a dead man.
It faded in and out like tires going over
road grooves, clacked every other heart beat,
strong and insistent, tireless and hopeless,
but soft, like a heartbeat heard through
a woman’s breast late at night after loving.
When Polly woke me up for last call I was alone.
Ahh, Jack, wherever you have gotten yourself to, be well. lives with his huge tom cat Jerry in Wisconsin, drinks wine, sometimes in excess, tries to live a poetically conscientious life, reads everything he can, and writes. His book Tangletown edited by Cross+Roads Press can be purchased by clicking here… A new book from Little Eagle Press out of Door county coming soon, a collection of poems tentatively titled Red Boots. Ralph Murre is the editor/artist/, and Michael is looking forward to working with him. More on Michael can be found on his myspace page and on onehandarmands.