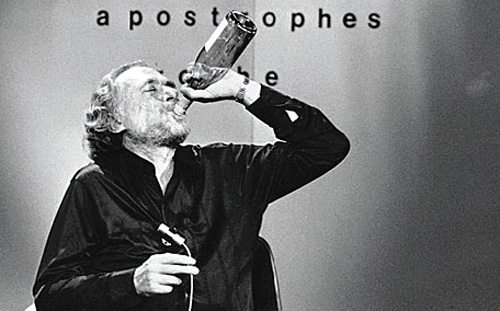 was a great dark force, a black mountain of fire in the world of writing. And, when he died he left a huge, gaping hole in that world. I never had the pleasure of meeting the man though there are a few stories around to the contrary. He worked the L.A. scene pretty much the way Raymond Chandler did. He made Los Angeles his stomping grounds. And, I worked the midwest. Rockford, Chicago, the alleys, the diners, the creeks, the flea bags, the bars, the ditches.

During his life time, and even more so, during the ten years since his death, Bukowski has become an American legend. He has passed into the mythology of American writers the same say that Hemingway, and Fitzgerald, and Faulkner have. Somehow in America, we have a way of loving our legends more than we love our writers while they are still among us. I’ve never been able to quite figure out why. I think it has something to do with that fact that they are no longer around to be threatening some how makes them so much more easier to worship, a joy to enshrine.

I suppose the one question that haunts most writers of Bukowski’s generation is, was he the greatest American writer of the second half of the twentieth century? I know there are some people who would automatically hand him the mantle. Personally, I think he was right up there, but he did have some formidable competition. First, there was Hemingway. And, as damaged as Hemingway was after FOR WHOM THE BELL TOLLS, he still was very dangerous for any writer to go up against. Hemingway was a monster and was incredibly famous while he was still alive. And, you know, un less you want to be broken, too, you don’t try to fuck with the man.

Then, there was Faulkner. He wasn’t nearly as famous but he was enormously talented. Nobody I know of can even now come close to AS I LAY DYING or THE SOUND AND THE FURY. I take that back. Maybe one guy can – Cormac McCarthy. Both Faulkner and Hemingway were still alive and writing while Bukowski was just getting started in 1955. And, if anyone thinks that this is an unfair comparison, just remember, we don’t compete against the poet or novelist across town or in what passes for a region. We compete against everyone writing during our life times and in a broader sense every one writing for all time.

Scott Fitzgerald knew that with Gatsby. Without Gatsby, Fitzgerald would be in the abyss with the rest of the wreckage out of the twenties. He’s probably in the abyss anyway, but he’s well remembered in that wreckage for creating somebody like Jay Gatsby.

Which makes the whole idea of writing some kind of game all tied up with love and hate and skin and pride and hope and despair and energy and anger and envy and howling and blood. Mostly blood. Because that is the fuel we all use to get the poem, the novel, even the bare electric line, down on the page. Blood is the fuel and the dream and the hope for every single thing that we write. And, I’m absolutely dead certain it was no different for Charles Bukowski. He may have resembled a huge damaged flesh rug unrolled for the party, but when he wrote, he wrote with all of his blood and all of his bones, full out.

Charles Bukowski wasn’t a handsome man. You couldn’t even call him ruggedly good looking, though I think in his moments of high fantasy he might have seen himself as a poetic version of Humphrey Bogart. Maybe if you looked into his eyes you might see some Bogart, but Bogart even in his most broken moments was never as broken in both body and soul as Bukowski looked, swilling booze in his shorts on the couch, or standing next to a fridge in a black t shirt holding a bottle of beer.

Bukowski, like Lorca, had a head that was slightly too big for his body. But Lorca was a kind of pretty boy. And, he especially had a boyish look. Bukowski never looked like a boy even when he was younger. Bukowski always had a tinge of the old man about him. Maybe it was that bout of acne he had in his teens. Or, maybe it was the result of the war he had with his father. But, it seems to me, he never looked young.

Bukowski had some kind of influence on almost every one of his contemporaries. And, I use the word influence in its broadest application. The poets who were most easily influenced were the young, kids who had never lived on skid row or worked shit jobs a day in their lives were suddenly trying to drink and write like Charles Bukowski. I’m sure Bukowski regretted seeing so many lost young poets trying to be, drink, and write just like him. It’s like getting back bad echoes of your own voice.

Then, there were his contemporaries. Poets who were either his age or slightly younger who saw in him something to be admired and almost worshipped. Some time around the seventies, correct me if I’m wrong, but I’m not far off, Bukowski became the poet to get drunk with. All you have to do is thumb through Howard Sounes’ BUKOWSKI IN PICTURES to get the idea. Hemingway was no longer around so Bukowski was the next best bet. I’m just guessing, but it seems as though Bukowski put these guys under the table and out wrote them to boot. But, they were his disciples, make no bones about that. They loved him and maybe hated him a little but had to be close to get a little piece of him because if you don’t have it and can get a little piece of it from somebody you know it’s almost like having it. In the realm of wannabe poetry it’s like getting laid.

The last group Bukowski influenced, this one is tough to pin down, is his contem- poraries who already had developed styles and voices of their own. I’ll start the show by admitting I’m probably one of these people. I knew about Bukowski when I started writing poetry in the late sixties early seventies but it wasn’t until I had created my own individual style of writing poetry that I finally took a good look at what Bukowski was doing. I couldn’t help but get a good look because his work was appearing along with mine in many of the eighties mags. By this time, I knew where I had come from, I pretty much knew what I sounded like, and I had a kind of half assed idea of where I thought I was going. Maybe more than a half assed idea. I had my own style and if you don’t have your own style you haven’t got shit, Dashiell Hammett notwithstanding.

That doesn’t mean I wasn’t paying attention to the way Buk was putting poems together. Forget about the novels. Let somebody else worry about them. I’m not a novelist. As far as I’m concerned or have ever been concerned it’s been the poetry. It’s like I’m standing at a roulette wheel and the poetry numbers are all out there red and black and I’m betting the ones that I think will work best. I can feel the play in my finger tips and it shoots energy all through me. As it had to for Charles Bukowski.

Bukowski was a gambler only instead of betting roulette, he bet the ponies. Same thing different setting. The poems became the horses and he bet them heavily. What Bukow- ski lacked in range he more than made up for with style. It didn’t matter whether or not he signed his poems. I could always tell if it was a Bukowski poem, the same way I can spot a Mark Weber poem, or a Kell Robertson poem, or a Tony Moffeit poem, or for that matter a Gerald Locklin poem. Style is where it all begins and style is where it all ends and if you can’t ante up style you ain’t even going to get into the game.

And, who was influenced by Charles Bukowski? I’d say practically everyone in L.A at the time and very likely everyone else writing in the small press, too. And, if anyone from the period of 1970 through the early 90’s offers a strong disclaimer, then you know that guy is lying through his teeth.

Charles Bukowski wasn’t the only small press poet who will ultimately leave a powerful legacy. There are a few others but maybe only one or two who have written as authentically or as much as Bukowski did. Bukowski was one of those natural forces that come along maybe once in a generation. I can’t think of any other contemporary writer who was quite like him. If you compare him to Hemingway, he was to Papa what the Tasmanian devil is to Clark Gable. He had a speaking voice that was something of a cross between W.C. Fields and William S. Burroughs. He was the least likely candidate of his generation to become an important American writer and yet he did just that. In spite of the snobs who despised him.

Fifty years ago I used to know lots of guys like Bukowski, just as damaged and wrecked as he was but without the genius to get it all down on the page. There was this one guy in particular who used to sit in the Clifton Café writing down notes for novels he never got around to writing. He always had the burger and fries. The fries were brown and glistened with grease and he was always wiping his fingers on his pants.

He had one of those death mask faces. Broken on the outside and broken all the way in. He almost looked like a third rate version of Jack Palance but without the toughness. He just had that fragile haunted look like he was hustling for a drink and praying for a line.

So, once I went up to him and said, “Are you a writer?” and he shot me one of those killer looks and said, “Don’t fuck with me, kid.” He drifted on like a lot of the other guys who stayed at the Clifton. I never saw him again, but sometimes I like to think that maybe this was Bukowski before he became Charles Bukowski and I was a skinny assed little wise guy fuckup before I grew up and realized I could take a shot at being Todd Moore.