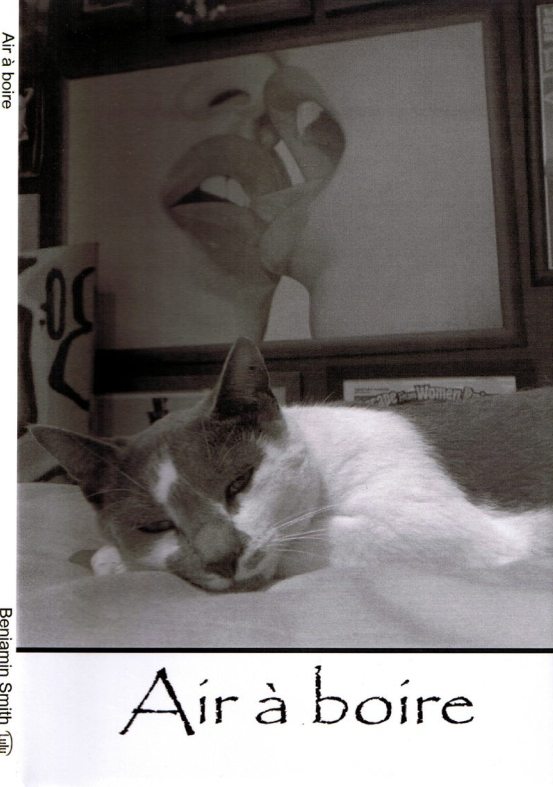 Ben Smith’s AIR A BOIRE, roughly translated as Drinking Songs, isn’t so much a book of poetry as it is a dramatic gesture, a kicked open door, a drink thrown in the face, a stiff shit of the best boiling down the throat. What got my attention right away was the cover with that sleeping cat in the foreground and the hyper realistic painting behind it of two lesbians with their mouths wide open teeth showing tongues just touching tip to tip. For me, the cover really makes this book pop and the photographer, D’Arne Julia Jamieson, Smith’s girlfriend, really knows how to work that lens.

The back cover blurb, from a review by Bill Chinaski, names Charles Bukowski as Ben Smith’s influence. “Like Bukowski, Smith delves into the existential aspects of everyday life with much humor and pathos….” Bukowski is obviously part of the influence. If you are twenty five years old, you love to drink, you love to get laid, you’ve discovered poetry and it sort of comes easy, and you think you are tough and will live forever, then Bukowski is your man. But a brief word of warning right at the beginning. Bukowski makes it all look easy. When it isn’t and never will be. However, Ben Smith is no Bukowski wannabe. Buk’s influence might be visible in some of the poems, but Smith is his own man and is capable of probing feelings that Buk, more often than not, hadn’t attempted.

Don’t be mad at me for saying this.

Even to this day,
they were the coldest eyes I ever saw.

All pissed on
with a red wetness,
from the center of her face.

Pinned back by the fury –
of her temper,
with a skull,
attempting to escape its skin

saying something cruel,
underneath her breath.

knowing that nothing can break your heart more
than the snotty bubbles,
popping,
at the end of your girls nose.

What I love best about this poem is its sheer viscerality. The cold eyes looking pissed on, the fury where the skull is attempting to escape its skin. Who knows what caused the trouble, a lover’s quarrel, maybe a fight over money or sex or another girl. Whatever it was, it doesn’t really matter. Most minor poets would go all soft and sentimental here, but not Smith. This is the tell tale mark of a real talent working. Instead, he kicks all sentiment aside and gives us what his girl really looks like, all of it, the warts showing, including the snotty bubbles popping at the end of the his girl’s nose.

Smith also possesses the ability to get at the utter, disgusting truth about himself. It almost seems as though he strips himself bare so the reader can get a good look of both the outer and the inner man.

It tickles me as it sinks,

Past my nipples,
Past my ass.
Past my balls.

I’m drunk –
to drunk to even finish this beer.

So I pour it in the bath
And mix it up with the water.

Let it swirl all around me.
Around my ass.

The whole beer,
Every thing –
My filth, my stink.
All awash and then down a hole.

Who wanted her first time
to be something special.

Party time has some of the grungiest and best descriptions of the left over shit of a party I’ve read in a long time. “One guy vomits,/chunky hurls of stomach gravy.” Buk would be jealous. Peaking duck, a very darkly funny poem, begins with these lines:

We lug a dead duck around,
all day;
stewing in its juices.

For sheer grotesque black humor, this is as good as it gets. One slight sidebar note. Not all the poems in this collection are this good. Some are just filler, throwaways that could have been edited out. Some like Sleeping like a vagina promise more than they actually deliver. But, the poems that are good, are very good, well worth the unknown price of the collection.

Like all first books of poetry or near firsts, the poems could have been edited in a slightly tighter way. I’m not sure if Smith intended all the glitches and misspellings. In some peculiar and just off center way they work this time. But, they also stand out. The darkness and the humor can just as easily be achieved with some tougher editing. Still, who am I to quibble? I love these poems. They hit me in my dark place. 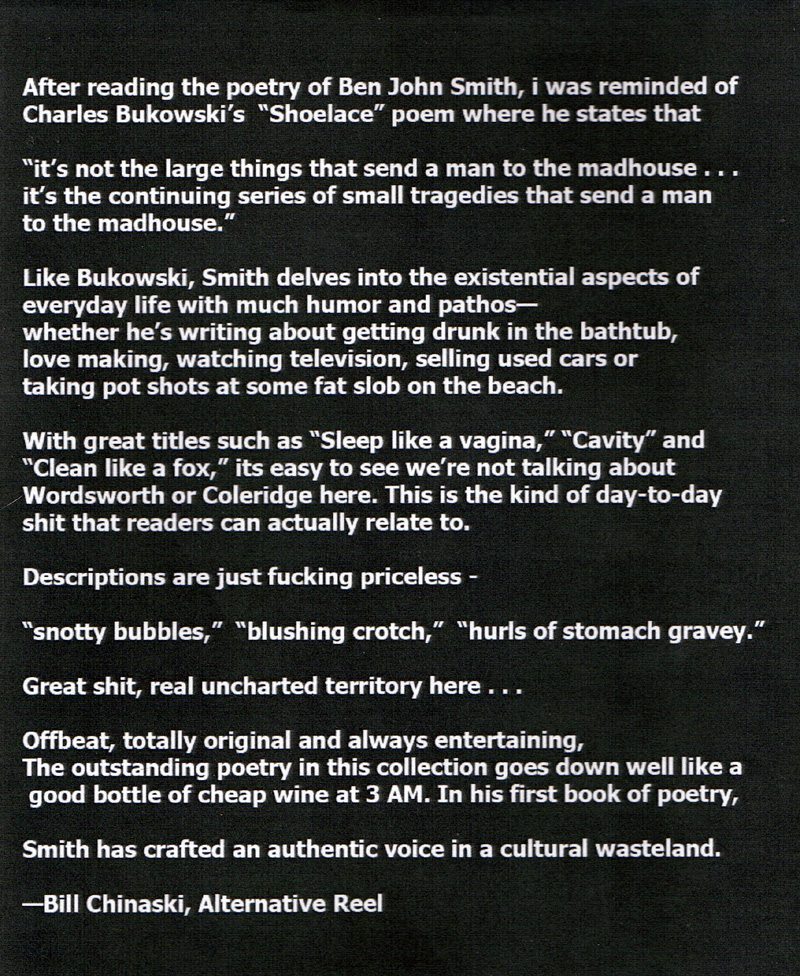 cavity | the cars at the front of dave’s | dont be mad at me for saying this | the holiday tan | bed head (oh, how cute) | your twenty one | get over it cassanova | her popcorn hair | untitled (1) | clean, like a fox, |reprieve, amoment from the glare | untitled (2) | growing into a beautiful flower | lifes a beach | untitled (3) | untitled (4) | party time | sleeping like a vagina | black and white | father and sons | twelve weeks of winter | untitled (5) | god might remember | without | pealing duck | cork sandels | I dont want to dissapoint you | the woman with the wagging finger | the same | no more footsteps | 29 poems in total.  Aire à boire is available via lulu.com and much more on Benjamin Smith can be found on his web page horrorsleazetrasch