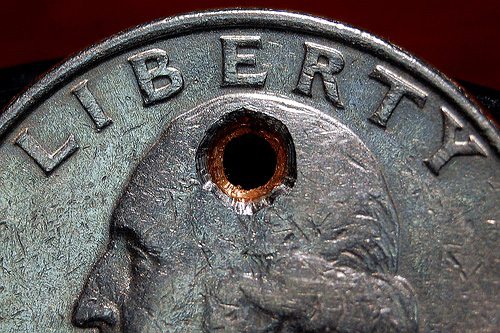 in the middle of a bank robbery and probably staged for effect, Dillinger turned to Charles Makley and said, What is it about machine guns that gets the blood going. Makley gave the bank president a look, winked, and replied, It’s because they kill people. Dillinger glanced over at the teller who was nervously filling a gunny bag with money and said, No need to worry little sister. The big bad wolf isn’t here for you.

Auto-Ordnance ad published sometime around 1920 depicts a cowboy standing on a ranch house porch mowing down a group of mounted cattle rustlers. Part of the ad reads, Fully automatic, fired from the hip, 1500 shots per minute. There is something so old west and at the same time so incredibly and irresistibly modern and american about a machine gun that there is no doubt in my mind why it was the weapon of choice for both Capone’s mob and Dillinger’s gang. It just simply was and remains today, even in all of its high tech variations, the lethal apostrophe hovering above and pointing down to a large pool of blood widening in some dark alley.

can’t do it and the reason you can’t do it is that the machine gun has somehow become both intimately and subversively a murderously erotic part of american culture. And, just when did that happen? Maybe it occurred the day that General John T. Thompson actually invented the submachine gun which later came to be known simply as the machine gun. Maybe it took place sometime during the Twenties when some Texas Rangers were shooting it out with a band of Mexican bootleggers somewhere down on the Mexican border. Or, maybe it happened when someone shot Dutch Schultz to death in the Palace Chop House in Newark, New Jersey. The murder weapons were actually revolvers but were reported to have been Thompsons. By this time the machine gun was already fabulously famous and so much a part of american culture it could never be erased or denied its importance.

at a gun show, standing near a table loaded with all kinds of automatic weapons. But, the centerpiece is a Model 1927 A-1 Thompson with detachable buttstock and clip. The weapon is sleek, compact, pristine, and beautiful with only a few minor and forgiveable dings in the wood. The owner is standing behind the display table running his hand along the barrel as though it is a woman’s thigh. He sniffs his fingers a few times just to get a smell of the oil and maybe something a little bit darker. He is telling one of the gawkers that there is a strong probability that Dillinger may have carried this weapon during the Mason City bankjob. No real provenance, he says, but I bought this gun from the son of a deputy sheriff who was part of a squad that raided one of Dillinger’s hideouts and found this piece with a bunch of other guns. He paused and said, Every time I hold it I can almost feel him inside it. How much is it worth, the gawker asked, rolling a toothpick around in his mouth. The machine gun owner smiled and said, I’d never think of selling it. Hell, it would be like selling a piece of america. What would you give for a taste of america?

I was on the fire department it was the bloodiest thing I ever saw, my old man said, studying a shot glass filled almost to the rim with whiskey. Someone had killed this guy down by the old vinegar works and dumped him out in the middle of the street. He must’ve had half a dozen slugs in his chest. His neck tie was nearly cut in half. The cop in charge told the newspaper reporter, We’re gonna call this one a suicide. The reporter stepped back, said, Somebody mowed this man down with a machine gun. The cop smiled, hawked up a big gob of yellow spit and sent it next to the dead man’s face. Then said, Suicide, again. The news photographer motioned the reporter off to the side and said, Lets don’t get in the middle of this. How come, the reporter asked. The photographer leaned in and said, Where machine guns are involved it’s mob shit. You start asking around, we’ll both have blood out the ass. Like this poor bastard.

watching MILLER’S CROSSING for the nine thousandth time. Someone has just tried to assassinate Albert Finney who plays a corrupt big city politician. Finney is standing outside his house and he is firing back inside at one of the men who has just tried to kill him. Finney catches the would be killer with several bursts from the Thompson and the man starts shaking convulsively. It almost looks as though he is ecstatically dancing. When that many bullets hit you, how can you remain still?

one time this kind of high speed death might have been shocking but now it has become almost hypnotic. It doesn’t matter whether I am watching THE ROARING TWENTIES or THE BOURNE IDENTITY, the effect is the same. Suddenly, I can’t take my eyes off what’s going on in the film. It’s as though I have become hypnotized by the high speed velocity of death or even pretend death. Some critic, and I don’t recall who it was now, referred to the machine gun shootouts in PUBLIC ENEMIES as almost cartoon like, right down to those intense yellow globes of fire pouring out of machine gun barrels. And while I can understand the critic’s need to reduce this action to a highly charged movie still of words, I really don’t agree. When you have machine guns going off in streetfights like the ones staged in PUBLIC ENEMIES, and if you pull it off and make it all seem like intense reportage, you just might be able to concentrate the viewer’s attention and focus his imagination to a degree that almost borders on a near trance like state.

twelve years old, standing at the main desk in the Clifton Hotel where my old man is the night clerk and he’s talking to a man who calls himself the freelancer. Remember from back in the old days when I used to ride the suicide seat in a scout car for Keeler, the guy says. My old man grins and says, He was the only legger who tried to compete with Capone. The freelancer laughs, says, Nobody ever found his body. You still have that Thompson you carried back then, my old man asks. It’s in a canvas bag, the trunk of my car. These days you never know. My old man tapped some Bull Durham into a cigaret paper, sealed it shut with his tongue and said, Would it be bad form to ask if you ever used it. The freelancer paused, smiled. Said, Yeah, bad form. The smile partly went away when he said, It’s the gun that america is all about. My old man nodded inside the roll your own smoke, said, 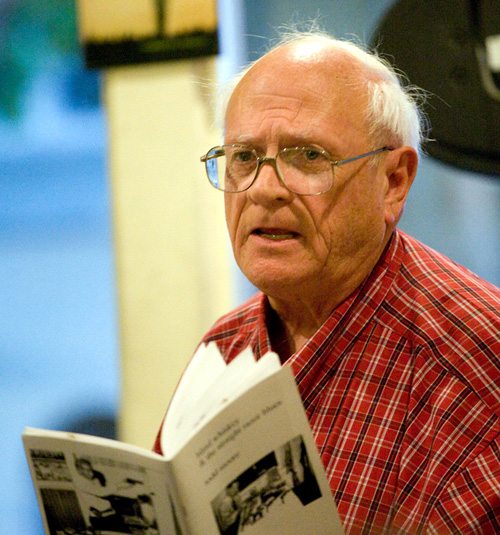