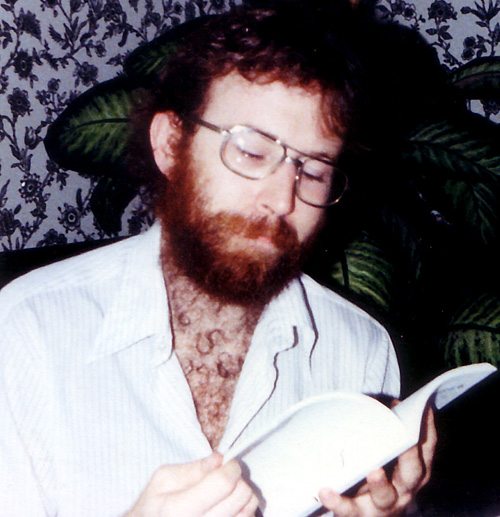 being an Outlaw Poet means just simply doing the right thing. Which is both a cliché and a quiet act of humanity. What happens in the poetry world is that we get so caught up in our own legends, mythos, and desperate stories that we forget or neglect or avoid our friends who suffer through disease, money troubles, divorce, or madness.

I personally wish I had written more often to Dave Church and never expected to hear that he had died in his cab. The news of his death still leaves me somewhat shaken. At the time, I had poems of his that I’d planned to send as an attachment to my son and the co editor of St. Vitus, Theron Moore. But, I’d put that off way too long.

But, I’m not going to do that with Pat McKinnon. Recently, McKinnon went through surgery to remove a large benign brain tumor. He survived with all of his faculties intact and discovered that he can still write poetry. Which is probably a miracle in anyone’s book.

I’ve known McKinnon for at least twenty five years, if not longer. For years, McKinnon edited Poetry Motel and presided over the Duluth literary enterprise called Poetry Harbor. Poetry Motel, in my opinion, was one of the truly innovative zines of the eighties. McKinnon had been largely influenced by the style of Dennis Gulling’s magazine Crawlspace which began in the seventies. Gulling had an eye for what I call invasive collage. Along with the poetry that he published, Gulling’s style of collage was visceral, aggressive, and absolutely in your face. And, this influence definitely shows up in most of the issues of Poetry Motel.

McKinnon’s eye for poetry as well as collage also shows up in the kinds of iconic poets he published during the heyday of Poetry Motel. Just scan the pages and you’ll find such poets as Ron Androla, Antler, A. D. Winans, Kell Robertson, Albert Huffstickler, and A. D. Winans. Poetry Motel defined the small press in the eighties the way that Raindog’s Lummox defined the small press in the nineties. And, I don’t think I would be too far off the mark if I said that Raindog was also influenced by the collagic style of Poetry Motel and adapted that look for his mag as well. 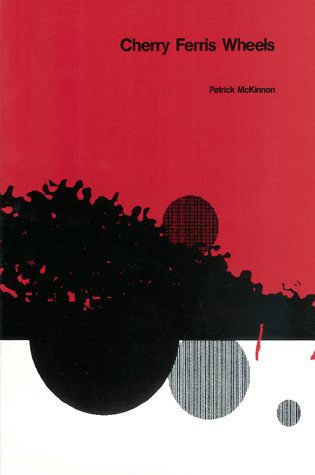 Pat McKinnon the poet has always struck me as someone in love with a kind of wildly exuberant or celebratory anarchy. A little over twenty years ago McKinnon, Gulling, Jesse Glass, and I decided to do the Outlaw Tour of southern Wisconsin. What it really amounted to was driving to Milwaukee to read at an art gallery. That was on a Saturday. Then Sunday we drove down to Chicago to read at a rather seedy bookstore on Belmont Ave. where the owner of the store barred the poets from using the restroom and suggested we walk six blocks to a fast food restaurant. I asked him why he didn’t want poets pissing in his crapper and he replied that he had nothing against our poetry but didn’t want our piss going into his stool. It might get contaminated. I remember Pat standing a little off to the side of the store. He was a little high, maybe drunk, too. He yelled, fuckit Todd, I ain’t giving him any of my shit. Then he walked down to Lake Michigan and pissed into the breakers while some sun bathers were yelling obscenities and throwing empty beer cans at him.

Most of Pat McKinnon’s work is out of print now which is really too bad. His best known book is CHERRY FERRIS WHEELS. If you are lucky you might find it at a good second hand bookstore or on the web, maybe at Amazon. Buy it if you run across it. CHERRY is definitely worth the money. Because, McKinnon’s poetry is the drunken shamanic shouted into the void.

coming slightly awake after total blackout
like blinking but only secondary chips of it
biting one side of my tongue right off &
hitting somehow the delivery truck brakes &
stopping 3 tiny feet from the half-frozen lake it
would’ve eaten that semi easily &
never given even the trailer back a
massive brain-tumor seizure on highway 2 at
45 mph even w/out traffic around me how that
truck didn’t tip or jack-knife when jumping that
curb didn’t falter down didn’t try to pass itself on that
football field hill to the sludgy ice that
undeniable slant toward chunky 34 degree water that
is bottomless in february is w/out forgiveness i
was running on full mercy you see i
was completely w/in the power of my spirit animal i
was ready to die i was ready to live i
was passed out for 20 minutes a
broken part of the steering wheel my
mouth spilling blood & a
fist-sized tumor as tho my bed had
been loaded w/death instead of
donuts 13,000 pounds trying to eat me alive like a
wonderful delivery-driver breakfast seizure-dumped into that
gnarly jagged-toothed wisconsin shoreline

This poem is currently unpublished.

I remember Pat McKinnon and Bud Backen sitting out on my deck porch in Belvidere one cool evening over twenty years ago. McKinnon and Backen were rolling some smoke and I was sipping a tall rum coke and we were talking about the way the night brings you things like a wolf carrying impossible dreams as though they were big chunks of meat in its mouth and that those dreams are the poems you are going to write only you have to find it in yourself in the darkest blood of yourself to be able to get them down on paper. McKinnon, whose face was obscured with night and smoke and talk and blur, said I keep running toward that wolf but it never stands still. I took a long chug of the rum coke and felt it get very warm in my throat and said, you crazy bastard.

Don’t you know, don’t you realize that the wolf is you.

0 Replies to “todd moore | patrick mckinnon and the drunken shamanic”