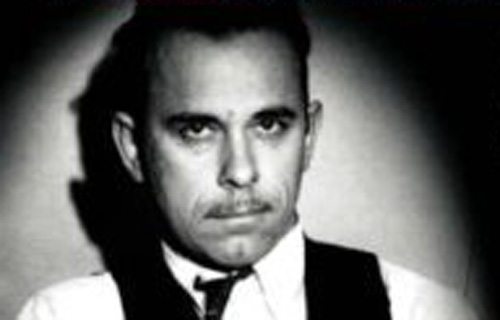 Someone once explained it to me this way over a beer. The guy held up The Corpse Is Dreaming, flipped through the pages, then set it down and said, owning a book like this is like having Dillinger right where you can touch him. Right where you can talk to him and have him talk back to you. You got his skin, you got his blood, you got his dreams. So, why not make it juicier and somehow steal the book because by stealing the book you steal the essence of the outlaw. And, in some marginal way, you also become an outlaw.

Still, there is more to stealing Dillinger than just stealing the book. There is the man, the blood, the history, the look, the mythos. The sheer act of writing about Dillinger is the complex act of theft. Anyone who has written creatively about Dillinger has either attempted to steal a piece of the corpse or has tried to reinvent the entire body of the man.

you were a handsome guy,
not like the rest of those
ugly bastards who went around
on killin sprees,

A piece of the corpse, the body of the man, maybe his soul, but if you are ambitious enough and tough enough and you think maybe you have that special touch of genius, then you go for all of it. You try for the style, the history, the arrogant sprawl of outlaw, the myth because once you have the myth you also have the darkly shattered dream of america.

The key to Dillinger is that he always changes, he never stays the same. It doesn’t matter how many biographers have carefully delineated his life or at least what we know of it, no one really knows who he was. The one thing we can be sure of is that he was a force, he was like a wind that came up out of dustbowl Kansas and blew the shit out of everything. He was like a tornado that swept into northern Illinois and just simply levellled main street. That much we do know, that much we can be sure of.

The fact that he was a trickster, that he was always shape shifting into something else is maybe the most important clue to both Dillinger the man and Dillinger the metaphor. Because he was a metaphor. He was as much a gesture as the hand sign for gun or as the wooden gun itself. He was a meaning all unto himself. He was what Humphrey Bogart longed to be as Roy Earle and Duke Mantee. He was what Johnny Depp hopes he has become.

The thing is you can steal all of Dillinger. You can make off with his gunhand, you can swipe his hat the straw boater or the snap brim stetson, you can jack his machine gun, you can shoplift his comb his 380 auto, you can hang one of the original wanted posters of him up on your wall right next to the felt portrait of Elvis or the James Dean poster where Dean is leaning back against a car in his most memorable fuckyou pose, but do you have him? Do you have Dillinger? Do you really have the Dillinger that you dream of? That you long for? That you would like to steal and put him into a book of your own?

Dillinger is the anarchic essence of the american outlaw. You can see that from nearly all of his photographs. Take a look at the Dillinger pose on the paperback cover of Dary Matera’s book DILLINGER. The photograph is really the classiest mug shot that I know of. Dillinger is seated. He’s wearing a dark vest, a loosened tie that lies all twisted against a white shirt. He’s giving the photographer one of his get fucked stares. But the most interesting aspect of this snapshot is the way he holds his hands and arms. He is using his right hand to loosely hold his left arm at the elbow. My question is did he borrow this pose from the old western film actor Harry Carey or was it just simply a spontaneous way of appearing? Next time you watch THE SEARCHERS focus on the way John Wayne poses at the end of the film, the way that Huston has framed him in that doorway. Wayne stands with his right hand crossed over and is using it to hold his left arm. And, where did that stance come from? Harry Carey, obviously. But, isn’t it interesting to speculate that it might have come from both Carey and Dillinger?

Dillinger is the essence of cool while in he’s custody in Crown Point, Indiana. In this snapshot he’s leaning on prosecuting attorney Robert Estill’s shoulder as he makes the sign of the gun across the man’s lapel. Of course it’s a setup and Estill is the patsy. Dillinger is the essence of hot when he poses holding a Thompson sub machine gun and the wooden gun in his father’s yard. And, sometimes even when Dillinger is not holding a gun, he becomes the metaphor for all guns, always. Bogart shooting it out with Cagney, Warren Oates opening up with a Thompson, Johnny Depp vaulting over a bank counter with his sleek machine gun. These are all variations of the biggest dream that america could ever know. And the dream is the movie of outlaw and you can taste it. You can taste all of it.

And, this is really what we all want to steal. Forget about shoving that book under your coat and concentrate on stealing the mythos of Dillinger because that is what we are all after, if we are searching for the dream of all dreams in america. It doesn’t matter if you are a biographer, a novelist, a film director, or a poet. What you want above everything else is that one book, that one film that somehow catches the key to it all, the dark and prevailing myth of the outlaw in america and even that mysterious that apocalyptic america itself.

you are an outlaw.