at the cover of BLOODY SAM: THE LIFE AND TIMES OF SAM PECKINPAH by Marshall Fine, published by Donald I. Fine, Inc. Peckinpah is staring into a camera lens. He has a bandana wrapped around his head. His face has that look of a thousand psychic train wrecks. The lines around his eyes look more like half a dozen knife scars rather than age wrinkles. I can just barely see his eyes in that shadow. That head shot of him, taken by Michael Jacobi, swims in the deepest shade of blood red I think the publisher could find. Every time I look at that cover I’m swimming with wounds. 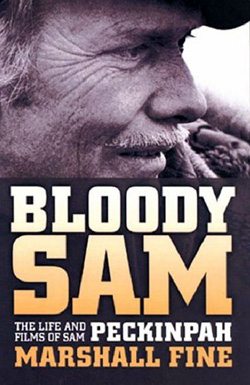 When I open the book, written on the endpaper are the following words. Kell Robertson, Box 581, Raton, NM, 87740. Mark Weber gave me the book. Kell gave it to him but I don’t know what Mark had to pay for it. Kell rarely gives anything away unless there is liquor involved. I’m betting Mark gave him two sixpacks of beer for it.

I’m looking at a snapshot of Kell Robertson. On the other side of the image are these words. “Recorded at Mitch Rayes house. I was living in a tent behind his house with his dog named Picasso. 2002/03.” In the photograph Kell is turned sideways, has his hands thrust into his jacket pocket. He’s wearing a black cowboy hat and it looks like he is trying to say something. Maybe he’s telling Mitch to go fuck himself or something to that effect because it’s just the way he has his head cocked, the way he has his lips placed like he’s making some kind of wise crack out of the dark corner of his mouth. 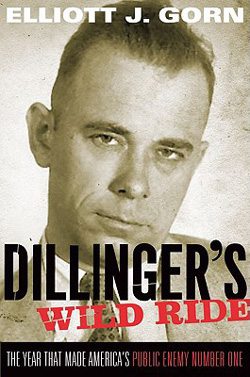 I’m studying the face of Dillinger on the cover of Elliott J. Gorn’s DILLINGER’S WILD RIDE, Oxford University Press. The image is credited to the Dayton Daily News. In the shot Dillinger has his head cocked slightly to the side. The face is expressionless though there are times when I could swear there is a slight smirk playing about his lips. The eyes are dead level and appear as though they are staring straight through you.

Years ago I used to know a guy who collected old time photographs of famous gunfighters. Once when I thought I had a cabinet card of Pat Garrett taken down in Silver City, I showed it to this guy and he said, Close but no cigar. How come, I asked. The collector took it out of my hands, held it at arms length, then up close and said, Take a look at those eyes. A man who shoots men down has stone killer eyes. This guy just has regular eyes. They don’t get inside you. They don’t see into your dreams. They don’t ghostwrite your deepest darkest nightmares. They don’t bushwhack your fantasies.

I’m staring at the only known and accepted likeness of Billy the Kid. The photograph, which was taken as a tintype, is a copy of the original. This is the iconic image of Billy posed with the lever action rifle and holstered six gun. I need a magnifying glass to get a really good look at Billy’s eyes. They appear heavy lidded, yet not quite closed for the shot. But, from what I can make out they appear to be staring right at the viewer. There is no sign of hesitation in that stare, no sense that he intends to look away. He would rather stare into your bullet wound scar than look away. 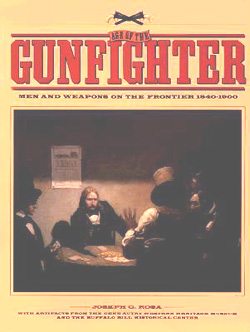 I’m going through book after book about old time gunfighters and outlaws. Joseph Rosa’s THE GUNFIGHTER is maybe one of the best when it comes to putting together a composite portrait of what the old west gunfighter/killer was really like. But, this is something I already knew. What I wanted to look at was the eyes, the eyes of the ice cold american killer were what I was after and the more I thought about killer eyes the more I had to keep looking. John Wesley Hardin, John Selman, Kid Curry, the Apache Kid, Doc Holliday. Holliday comes close in one or two photos. His eyes are so sociopathic casual. In another life they might have belonged to a shark or a wolf.

Though it really doesn’t matter how much I rummaged through old books looking for the images of those quintessential gunfighter/outlaw/killer eyes I never did find what I was looking for. The question I keep asking myself is can you actually see that murderous look appear in someone’s eyes? Maybe, just maybe it’s possible when someone like Billy the Kid or John Dillinger is staring over the barrel of a Colt 45 or a machine gun. Maybe that’s when that killer look really takes shape and there is absolutely no doubting the way their eyes acquire that extra lunatic menace. Maybe you actually had to be there when the Kid let Bob Ollinger have it with that ten gauge shotgun. I don’t know how many times I wanted to get up close to the Kid while he was pointing that scattergun. I don’t know how many times I wanted to look right into the Kid’s eyes at point blank range while he was cocking those hammers back on that meat maker. Maybe they’d be so dark and so far back in the shadow of his shoulder and the pure night that the gunstock made on his body that I could never really see them. Or, maybe they would just get so killer dark that I couldn’t see inside them. Let me touch your eyes with my fingertips, Kid. Let my fingers graze your eyelids, Johnnie. See if anything comes off them.

The obvious eyes to stare into are Dillinger’s. All his mugshots show his eyes so clearly and that one taken at his father’s house where he is holding the machine gun in one hand and the wooden gun in the other, he is smiling and his eyes are smiling, too, but are they killer eye smiles? That’s the question. That snapshot reminds me so much of the one that Butch Cassidy, the Sundance Kid and the rest of that wild bunch had taken in Fort Worth, Texas at the tag end of the nineteenth century. None of them are actually smiling but this is that famous fuck you photograph they had taken in their Sunday best and then had sent a copy back to some bank they had recently robbed. Dillinger with his machine gun and wooden gun, Butch and Sundance in their best clothes ever giving all the banks and the railroads they’d robbed the most stylish finger they could think of. This is totally killer and done with such point blank style. Let me at least touch the original photograph, Sundance. Maybe I can get a feel for all of those eyes.

Snapshot of a Mexican bandit standing with his back to an old adobe wall. He is not wearing a blind fold but because the photographer took the image from the side all I can see is his face. The faces of the Federales are a blur but their rifles look crisp. Death always makes the images of guns appear crisp. 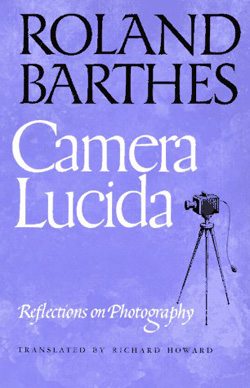 I’m thumbing through CAMERA LUCIDA by Roland Barthes. I stop on page 46, the photograph taken in New York’s Little Italy by William Klein, 1954. What I can’t get past is the hand holding a revolver to a young boy’s face, almost even with his eyes. By using a glass I can see that the boy’s eyes are turned toward the gun barrel, as though they are anticipating something. Some kind of magickal surprise. Still, he is smiling. The woman peering over his shoulder is also smiling and so is the young girl on the left side of the photo. You can’t tell who is holding the pistol, but from the bracelet on the wrist just underneath the hand holding the gun and from the long dress like clothing this person is wearing, my best guess is that this is a woman. Still, my gaze goes back to the revolver and the boy’s eyes which are trying to get a look at the gun barrel. Why does he want to see it? Shouldn’t he be glancing away? Is it possible that he will see death as part of that revolver? Can death live inside such objects? Can death live anywhere it wants to in america? And, is the pistol real or a toy? And why is it being pointed at a child’s face? Or, does it matter? Is this one of those signal images which define our darkest fantasies? The gesture of pointing is all too real because in that simple ritual of pistol to the face and the death over laughter eyes patiently watching lies the ominous and very lyrical history of the american death wish.

Maybe I can go on looking for a thousand years and never exactly find what it is that I am looking for. Because, what I’m looking for and have been looking for is the darkest kind of poetry imaginable. A poetry that comes straight out of the eyes and then goes back into them. The kind of eyes that can see all the way back and down into that fester of archetypal images floating in that night of all oceans. The outlaw poem begins and ends there. 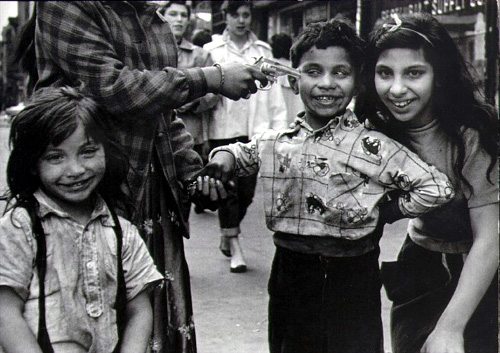