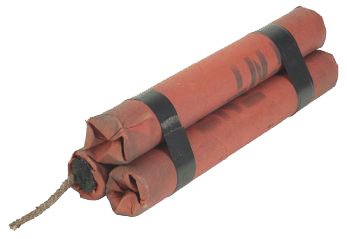 Have you ever noticed that the simple american declarative sentence looks like a fuse and maybe all you really need to do is light it, then step back? Some poets like to fool around with language. I like to fuck it up. Not cut it up like those fold and cut experiments of William S. Burroughs and Brion Gysin. I’d like to see the immediacy of the american sentence suspended in permanent explosion. The trick is to reinvent the sentence while it is still being blown to hell. It’s like trying to rewire the american psyche by pasting bits and pieces of it together with nitro.

The problem with the american poetic sentence or lets make that the american poetic line is that it has grown fat and lazy. It has vegged out on John Ashbery’s couch for far too long, it has become Robert Pinsky’s boring explanation of america, Robert Bly’s failed leap, Donald Hall’s aging whine. I look at these guys and imagine them and many of their generation as the broken down CEOs still sitting on the board of the fucked bank of the american sentence. And, forget about bailout. The fucked bank of the american sentence cannot be bailed out. It is too long gone for that. It is emphysemic, the oxygen desperately chuffing. So, isn’t it time for someone, say an Outlaw Poet, to go in and rob this joint? Or, if there is nothing in it to rob, then just shoot the everlasting shit out of it? Blow its windows out, level the walls. Isn’t it time to liberate the american sentence from this psychic loss of breath, maybe give it some semblance of life?

And, beyond that, how about making the american sentence/line/syllable something that is absolutely dangerous again? When was the last time you read a poem that got you so excited or scared you didn’t know what to do with yourself? Yeah, I know, a well written thriller can do that. The murderer is coming up the stairs and the heroine is looking for a weapon, something to stab him with, something to crack his skull with and the murderer can hear that and it gets his blood jumping and he is getting an erection and he knows that this time the act of killing is going to be visceral and nervous and sweaty.

When was the last time someone got that into a poem? When was the last time the narrator of a poem fired point blank into someone’s head and the blood got on the shooter and he went through a couple of bars of soap trying to scrub it off and then he got a rash on both arms and down his chest and he was so afraid that this would be a dead giveaway that he had pulled the trigger.

The answer to those two questions is probably never. Except for some poems that I may have written or will write soon. There are two basic things wrong with the american sentence, the poetic line. First, it thinks it is Whitmanic while in reality it is really only artsy blabbery in ways that are equally boring and embarrassing. And, two, it has lost the force, the drive, the vision, the velocity, the fire, and the ultimate power of its lethally dark potential. The thing to remember is that the american dream at its best is apocalyptic and the archetypal music of the apocalypse is raw poetry.

The american sentence which is really the heart, the blood, the lungs, the genitals of the american poem has been stripped of its heart, its blood, its lungs, and its crotch. Nothing is left except a cluster of empty and useless words. Filler for The Writer’s Almanac or endless pages of hohum hokum in The American Poetry Review.

The question that aches to be asked is where in the fuck has the american poem gone? Or, if it is still being written, who is writing it now? William Carlos Williams wrote To Elsie and PATERSON. Has anyone since expanded on those poems? Has anyone since gone into the darker poetic realms of the american psyche? Consider Ed Dorn’s GUNSLINGER, or Sylvia Plath’s ARIEL, or The Riddle Of The Wooden Gun. I could go on. The point is what happened to the essential american long poem or poetic sequence in the last thirty years? What happened to the incessant nightmare talk in the american dark? Since when did all of that go chicken shit and just stop being important? Since when did the poetry coming from the mainstream presses in america suddenly stop being the psychic equivalent of the great american novel? Or, was it ever?

Suddenly, I am twelve years old again. I’m standing in front of a bonfire with a kid who has a stick I want. I don’t know why I want it, I just want it. The damned thing is crooked as hell and has all kinds of snapped off places where the nub ends are dried out and sharp and jagged. And, before I can say anything this kid who knows I want that stick throws it into the bonfire and I don’t even think twice about it, I just reach into the fire and grab that stick out. And, while my hand is in there, I can feel the heat go all over my hand and arm and even though my whole arm is in there for only a few seconds, when I take it out with the stick intact, smoke comes rolling off me and the hair on the back of my hand and all up and down my arm has been scorched off and I can feel places where the fire has stung my skin and I do a little dance for several seconds but the quick pain goes away and I have that stick, that goddam stick is mine because I bought it with the fire and the smoke and the wood and the sting.

I used to know this kid whose old man worked in a stone quarry. Sometimes he’d come home drunk with a couple of sticks of dynamite shoved under his coat and once when I went back to this kid’s house his old man was sitting with a bottle of Jim Beam on the kitchen table, a stick of dynamite in his left hand, and a cigaret lighter in his right and he was smiling. The kid whose name was Jerry said, he’s not gonna do anything. His old man heard him say that and said, watch this, and he clicked the lighter open, started it going, and lit the dynamite.

Jerry’s eyes got big when he said, you better put that out. His old man had an even wider smile while the fuse burned down toward the stick. Jerry grabbed me by the arm and dug his fingers into my skin. I swallowed hard and wanted to move but was afraid to. Finally, when the fuse had burned to within an inch or so of the whole thing exploding his old man cut the fuse with a butcher knife and the thing sputtered out between a plate of burnt toast and a sprawl of cold meat. The old man said, I dreamt I found my hand somewhere out in the yard. Jerry turned and whispered, he’s full of shit. Then he pulled a switchblade out of his pocket and said, lets so cut something. I gotta get out.

The sentences that I am writing now are long sticks of dynamite. I can’t take my eyes off them. They are lit and burning. Todd Moore

0 Replies to “todd moore | the sentences are burning”