When I was a kid

I remember my old man standing in the doorway of one of his favorite watering holes, a dive called Jerry’s. He was telling Jerry who was tending bar one of his outrageous stories. I think it was the one where he and some other guy went hunting for The Lost Dutchman Mine in Arizona back in the Twenties. When he got done Jerry looked up from the draft he was pouring and gave my old man the finger. He did it with a smile and to complete the ritual, my old man returned the favor. Then the whole joint went up in laughter and Jerry bought the next round for the house.

I was fighting a kid down by the railroad tracks. He was trying to get me with a railroad spike and I had a cut down lead pipe and he grazed me once in the side scraping my ribcage and I got him a good one just above the left ear and he dropped the spike and took off across the tracks. When he got to the other side, he stopped next to a Southern Pacific boxcar and flipped me off before taking off for the hobo jungle down by the river.

I’m trying to pass a blonde on I-40. I get right up next to her red Buick. Then she guns it and gives me the finger. Somehow I don’t mind because she is so classy looking, the car is so new and so red, and between her speed and the way she looks she gets all the dreams going. It takes me right back to AMERICAN GRAFFITI.

The first two fingers of either hand carry a million years of ritual and meaning. The anthropologists have long believed that we are the way we are because of our opposable thumbs. But, in my opinion, those first two fingers also carry the key to it all. A few years ago, when I was writing a section of DILLINGER called The Sign of the Gun, I researched all kinds of hand signs and found almost nothing. At least, nothing worth using. The sign of the gun or what I’ve come to call the gunfinger, is the index finger pointed straight at someone with the thumb cocked up. The sign itself, I think, is older than the invention of the gun but that’s only my opinion.

However, the ritual of giving someone the finger, according to a website called THE FINGER, can be traced back to the Greek playwright Aristophanes who reportedly told a vulgar joke that involved the confusion of the penis with the middle finger. Also, THE FINGER included a brief history of how the middle finger gesture eventually migrated to Rome where the emperor Caligula found it so interesting he made it a tradition for anyone who met him to kiss his middle finger rather than his hand.

In the United States, the middle finger gesture was officially recorded by a camera when the nineteenth century baseball team the Boston Beaneaters posed for a photograph and the pitcher, Charles Old Hoss Radbourn flipped off the photographer. I’d like to think Radbourn was drunk or just fucking around when the picture was taken. Was he the first american to be photographed in the act? And, even if he wasn’t, he had to be among the first.

Or, consider this scenario. Arthur Rimbaud gets up in front of a group of poets to read a page from A SEASON IN HELL. First, he cuts one. It’s a long reverberating fart that seems to echo throughout the room. Then he picks a louse off his coat and flicks it at one of the minor poets sitting next to him. The man ducks and giggles nervously. Finally, Rimbaud reads the page to an audience that doesn’t know how to react, so as a final gesture he simply flips them all off.

My old man used to tell me to be careful about who I was giving the finger to. He said he used to know a gambler back in the Twenties who would cut the middle fingers off guys who had flipped him off. My old man grinned when he told me the story because once when this gambler’s house caught fire, my old man helped carry some of this guy’s suitcases out of the house. Later, the gambler took my old man aside and said, Don’t ever tell anyone I showed you this shit. He opened one of the suitcases and ran his hand over bundles of tens and twenty dollar bills. Then he peeled a couple off a stack and gave them to my old man who said, I’m a fireman, it’s my job. Go on and take it the gambler said. And, you can have this, too. He dropped a couple of finger bones into my old man’s hand, then smiled and said, Don’t ask.

Maybe Aristophanes was onto something. Maybe what he did was invent, not just a sign, but an entire range of possible signs, a metaphor that both lived in and transcended the crotch. But for some reason no one looks for any transcendence from a middle finger.

An unsubstantiated story has Melvin Purvis kneeling down next to Dillinger’s body just seconds after he was shot, slipping his right hand out from under him, and bending the middle finger straight back until he heard it crack. What Purvis failed to understand was that Dillinger was the outlaw’s outlaw and the finger he gave to the banks could never be broken.

I remember having a drink with Kell Robertson once in some downtown bar in Albuquerque. Robertson had just ordered his seventh beer when the bartender looked at Robertson and suggested that he slow it down a little. Robertson, characteristically, stepped back from the bar, folded his jacket back slowly on the right side as though he were clearing that space so he could draw a pistol. Except he wasn’t wearing a gun. Instead, he put his hand down near his leg, then raised it, a folded fist with the middle finger pointing up.

The middle finger, the bird, the fuck you wave is maybe the purest sign of the outlaw that I know of. Even more than the gunfinger, it is an expression of hate, joy, and everything that ranges in between. Aristophanes may have invented giving the finger, but the Outlaw Poets are working hard to perfect it. It’s the one pure poem we all give back to chaos. It’s the twenty seventh letter of the alphabet.

Use it bravely. Give it with style. 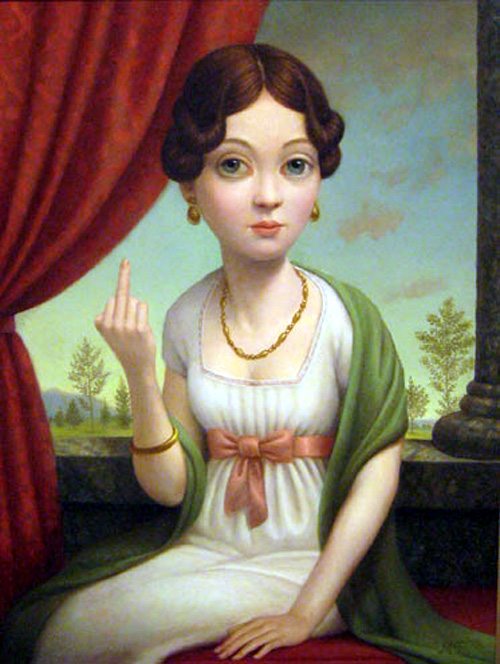 0 Replies to “todd moore | the sign of the outlaw”