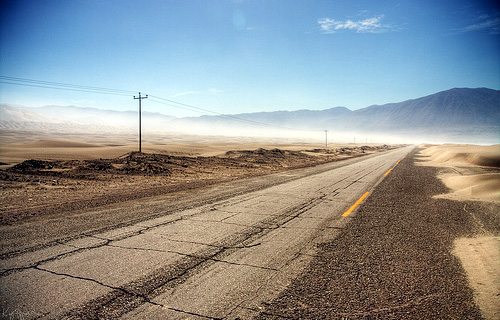 In Los Angeles I hear some guy complaining about the Santa Anas, how they make him a little crazy. He’s been trying to find his old copy of Raymond Chandler’s short stories, the one called Red Wind. He claims reading that is the only thing that might save him, keep him from pulling a gun or a knife. He’s drunk and brushes past me in the crowd and for the fraction of a fraction of a second in the blur of street moves he almost looks and sounds like a kicking crazy version of Bukowski.

Working the wreckage of the american poem in an old bar that sits next to the railroad tracks and some guy is showing off a scar he got in a fight with box cutters. Said, the sumbitch tried for my throat and I put my hand up and went sideways. Then got him in the eye and while he’s wrestling with his eyeball which is out on his cheek, I notice that my thumb is wearing a red hat only it ain’t a red hat. It’s blood. Outside the bar a freight is rattling by and I go outside with my drink and in that rush of dust that the train clicks up I get the last three lines to a poem. It’s like they dropped right off that freight and announced their arrival.

I’m driving highway ten in Arizona from Deming to Las Cruces, New Mexico. Barbara is sitting beside me. She isn’t sure we can make it because we are right in the heart of the worst sandstorm I’d ever seen. The wind is blowing a wall of black sand straight at us and even though I can’t see very far out the windshield I can still just barely make out the white line in the middle of the highway. And, as though the wind isn’t enough, I am beginning to get the first few lines of a poem I will write in Las Cruces. And, I know that somehow the poem is all the compass I will need but I have to keep working it, I have to tease the lines out of all that black sand so they will haunt me.

Working the wreckage of the american poem in Belvidere, Illinois. The sky to the west is black and blue green, tornado weather. There has been no wind at all for several minutes.

The trees in my backyard have grown peculiarly still. The blackness looks as though it could drop right out of the sky. Then a little puff of wind starts up, just the slightest hint of a breeze. The leaves begin a slow shake before they speed up. The way they slap each other sounds almost like a kind of leaf hysteria. It is still not raining when a scrap of paper gets blown into my yard and is whipped straight at me. I grab it before the wind can sweep it high into the dark clouds. It’s a newspaper article on the bankrobber John Dillinger. Only the top half of the article remains along with the photo of Dillinger holding a Thompson in one hand and the wooden gun in the other and he has the biggest smile on his face I’ve ever seen. This happens just a week before I will write The Name Is Dillinger.

Jerry is talking about the day his old man accidentally shot him in the leg with a 22 target automatic. He was drunk, Jerry said and he was trying to do the road agent’s spin and he dropped the goddam pistol on the floor and it went off. What did it feel like, getting shot, I asked. He said, I think I said oh oh, like those times I dropped a glass on the floor and it broke only I was the glass and I got broke. And, I remember there was a wind going outside and when the ambulance came it was dark and the moon was all red and one of the guys loading me onto the gurney said it looked like there was blood on the moon and then the wind looked like it was getting red, too.

I’m watching MILLER’S CROSSING again. It’s pure Coen brothers gangster anarchy. And, the more I watch it, the more I find myself needing to see Albert Finney work that Thompson sub machine gun. I need that as much as I have to see the pitched gun battle at the end of THE WILD BUNCH, as much as I have to watch the trailer for PUBLIC ENEMIES just because it’s the best mini film going, as much as I have to watch Jimmy Cagney shoot it out with the feds at the end of WHITE HEAT. These are compulsions, these are obsessions, these dark visions are both my dreams and my blood. But, I am especially obsessed with the way that the wind blows the hat out through the woods in MILLER’S CROSSING. It’s a gangster wind, it’s an outlaw wind, it’s a desperado wind. And, somehow, at least for me, that blown hat has become a kind of dark metaphor for the wrecked poetry of america.

I’m on my way up to the box office to buy a ticket to BONNIE AND CLYDE. A gust of wind blows a thin spray of dust up the street and along with it comes the strong odor of burnt rags. You smell that the guy in the ripped gray jacket says when I pass him under the marquee. Smell what I say, fishing my wallet out of my coat. That odor. You know what it is, he asks. I’m trying to make it to the box office but he’s blocking my way. No, I tell him, not really wanting to get into it with a street crazy. It’s blood, pal. He winks like he’s in on the biggest secret in the world. So, okay, I say, whose blood. Ripped gray jacket says, it’s the blood of us all, then puts a gun finger to his head, cocks his thumb and goes bang.

Wrecked poetry in america is the blood of us all and we are standing in an outlaw wind and all we have is the wind and the wrecked poem and the anarchic blood of america and Kell Robertson is trying to write a poem about the wind and I’d like to think he’s doing it at a beaten up picnic table out behind some New Mexican cantina and he has a half filled long neck sitting in front of him and a sheet of borrowed paper held down by an adobe brick against the splintered wood surface of the table so the wind won’t blow it away and he is using a cheap ball point pen he stole off the bartender and the lines of the poem are beginning to come to him fast now and he keeps looking up at the Sangre de Cristos because mountains have a way of talking to you when you write and while he is writing a woman brings him a plate of tamales and another beer because she knows he is hungry and that his hunger is for food and also for dreams but she also realizes that she can only touch his dreams by touching him she can’t get any closer than that and he knows he needs the food and the beer and the pen and the paper and the lines of the poem and the woman but right now what he needs most is the poem because without the poem he is nothing. Later he can put on his Wes Hardin face but if he is going to be any kind of an outlaw at all, he’s got to rob the wind if he wants to get the poem.

What’s left of the wrecked poetry of america is the outlaw wind. Todd Moore